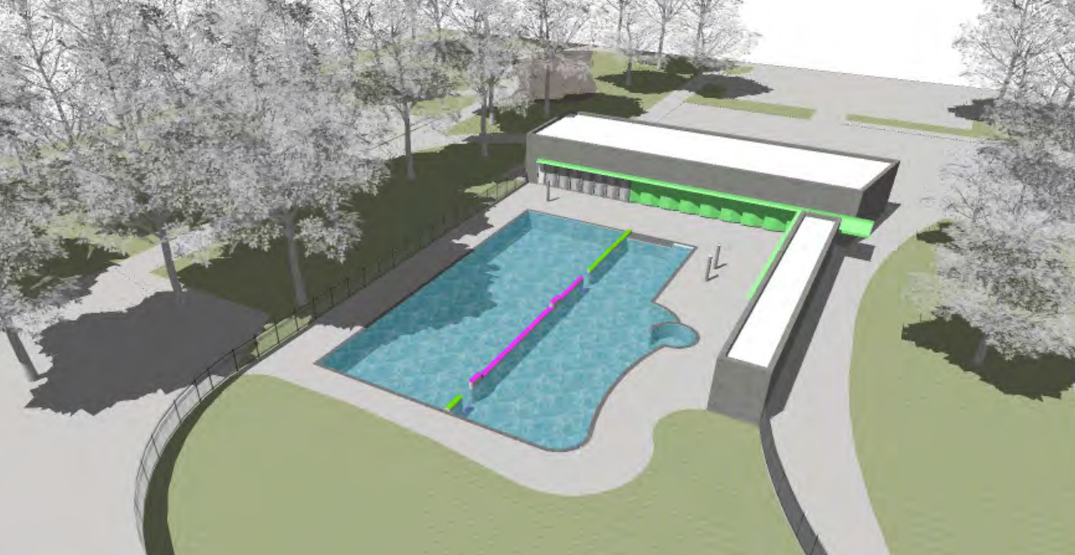 Next week, during a public meeting, Vancouver Park Board commissioners will review a report by a consultant that explores the technical and cost feasibility of building outdoor pools at both locations.

Earlier in 2021, Carscadden Stokes McDonald Architects was contracted by Park Board staff to explore concepts, building on the work of the 25-year VanSplash strategy of expanding and improving aquatic recreational facilities across the city, which was approved by Park Board commissioners in 2019.

There has been an identified need for more pools, including outdoor facilities; there are just five outdoor pools in Vancouver, while Toronto has about 60 and Montreal has over 70 — far more on a per capita basis.

During the years-long VanSplash public consultations, it was noted that there is a need for more indoor and outdoor aquatic facilities, but in some scenarios, based on location, outdoor pools operating on a seasonal basis would see lower utility and high operating costs.

The exploration work performed on Mount Pleasant Park and Hillcrest Centre is conceptual only at this point, and these proposals are unfunded.

The outdoor lap pool at Mount Pleasant Park, located at the northwest corner of the intersection of West 16th Avenue and Ontario Street, was demolished about a decade ago over its low use and high operating costs.

The pool located closer to the West 15th Avenue edge of the park was subsequently filled in, and Mount Pleasant Community Centre was relocated into the base of a new residential building at 1 Kingsway.

The entire park was then reconfigured and redesigned with a large open grass area at its core, including replacing the large surface parking lot next to the pool with more green space and a basketball court. A skate park was also added on the south side of the park closer to West 16th Avenue. 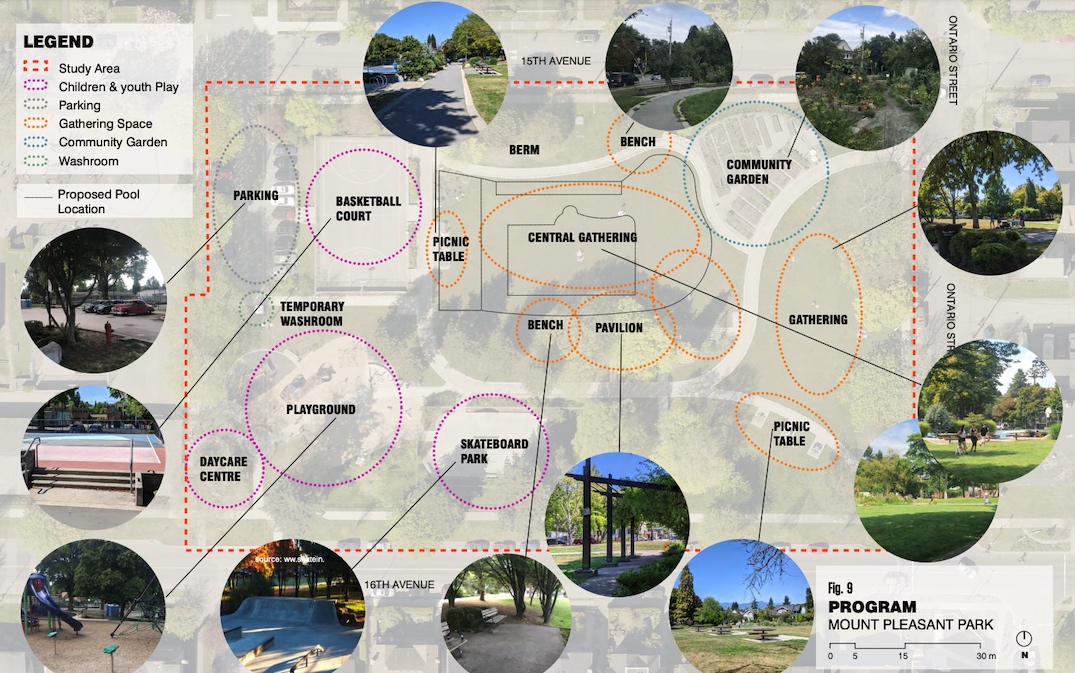 The concept of bringing back a modern outdoor pool to Mount Pleasant Park uses the core of the park — the large open grass area, including a portion of the footprint of the previous pool.

There would be a 25-metre combined four-lane lap and leisure pool with a depth of 1.5 metres, and new structures containing an office, kiosk, change rooms, and supporting and pool equipment spaces.

The highly preliminary construction cost is estimated at $14.4 million, based on construction starting in about three years. 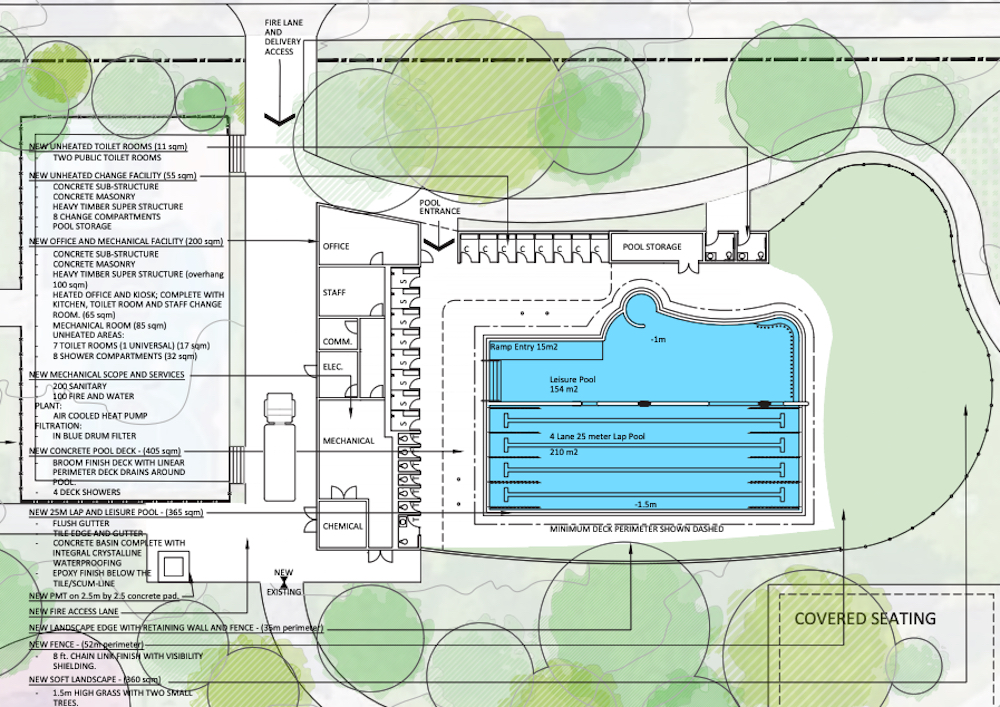 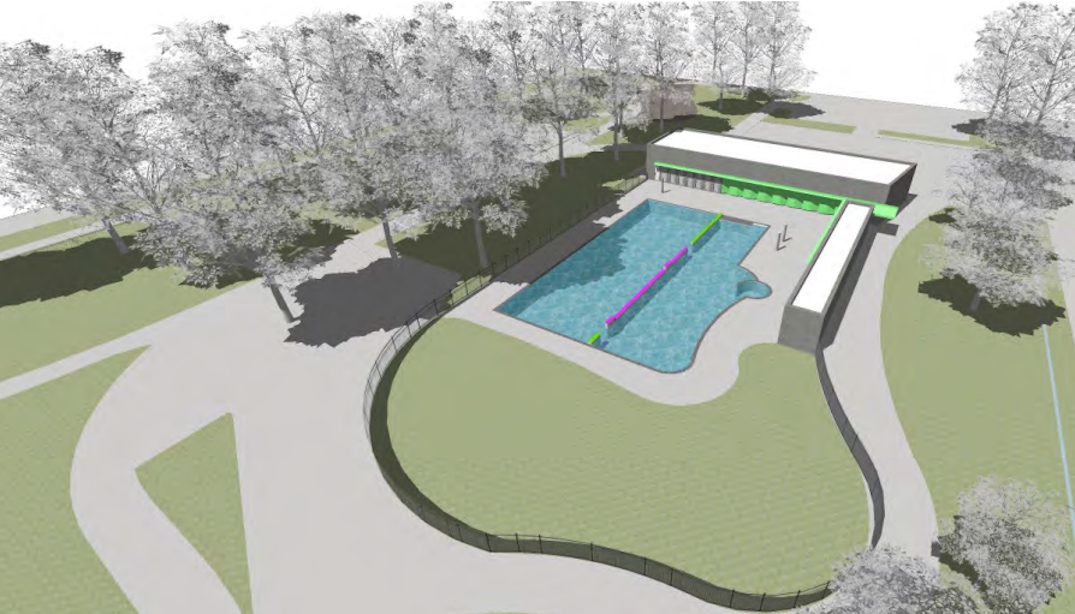 Under municipal government policies, this facility would have to be built to both Passive House and LEED Gold green design standards, which add to construction costs.

Mount Pleasant Park is attached to the grounds of Simon Fraser Elementary School immediately to the west. It is noted by the consultants that the open grassy spaces created by the park’s redesign have become a popular area for area residents, so its removal could be challenging.

The new pool would also have an open grassy area, but it would be fenced off as an amenity area for pool users.

Hillcrest Park’s Hillcrest Community Centre, built in time for the Olympics, includes one of the city’s most highly used and largest aquatic centres. It has both indoor lap swimming and leisure pool facilities, as well as a small outdoor leisure pool.

It would be a 25-metre pool with four lanes and a depth of 1.5 metres. New structures would be added to provide this facility with showers and change rooms. There would also be open lawn areas, with the entire area fenced off.

Based on construction starting in about three years, $5.4 million is the highly preliminary construction cost estimate. Unlike the standalone Mount Pleasant Park pool concept, the new additional pool for Hillcrest Centre has cost efficiencies from using some of the same equipment and infrastructure as the existing aquatic centre. Additionally, as this is an expansion of an existing complex, it does not need to meet Passive House or LEED Gold standards. 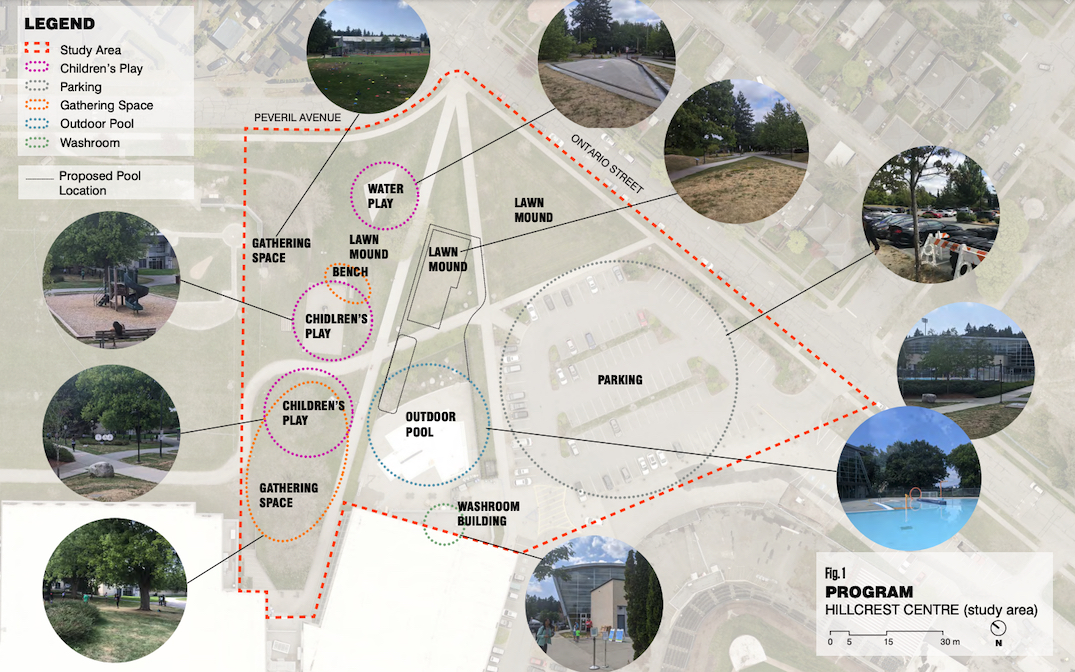 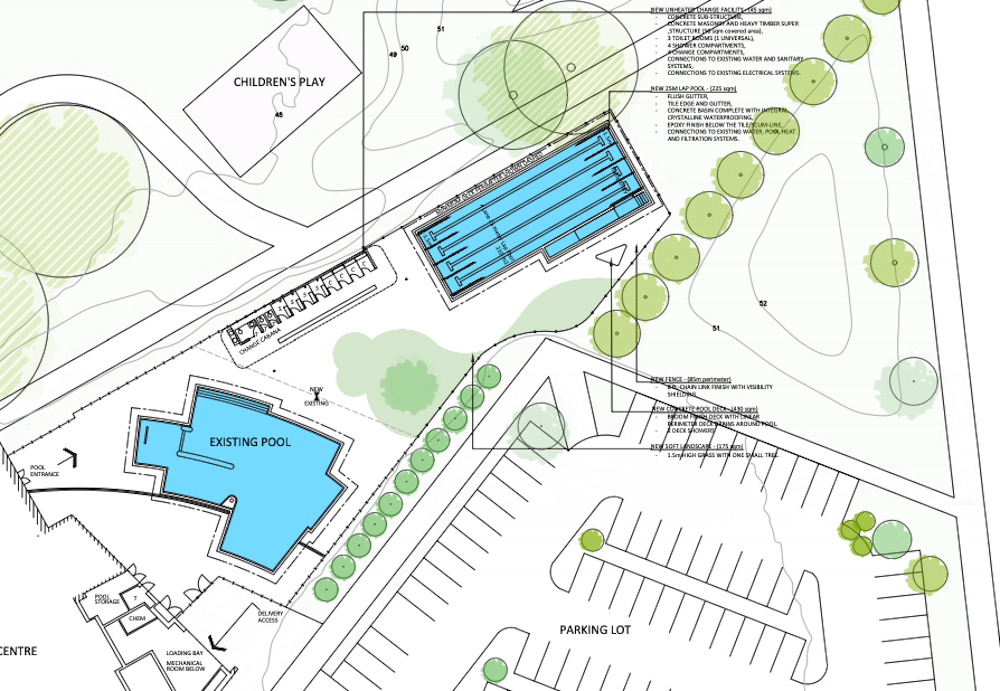 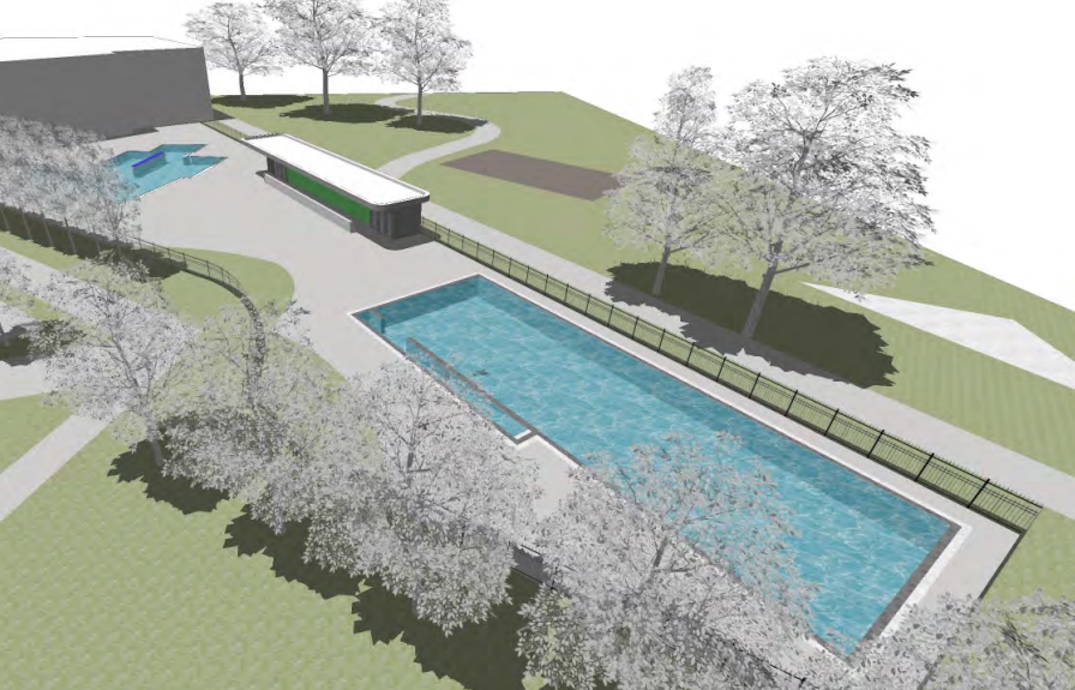 Under VanSplash, the indoor pools at Lord Byng and Templeton were initially set to be demolished, and consolidated with new future larger pools at Connaught Park and Britannia Community Centre. Due to neighbourhood opposition, the closure of these pools was cancelled upon the finalization of the VanSplash strategy.

There are also plans to build an outdoor naturally filtered swimming pool somewhere along the Fraser River, and replace the aging Vancouver Aquatic Centre next to Sunset Beach Park on downtown Vancouver’s West End waterfront with a new destination-sized pool, potentially with a retractable roof.

As well, planning is underway to reconfigure Oak Park — located at the southeast corner of the intersection of Oak Street and West 59th Avenue — for a new replacement community centre, childcare facility, and outdoor swimming pool. Construction on the project, estimated to cost about $54 million, is expected to begin in 2023 for an opening in 2026.