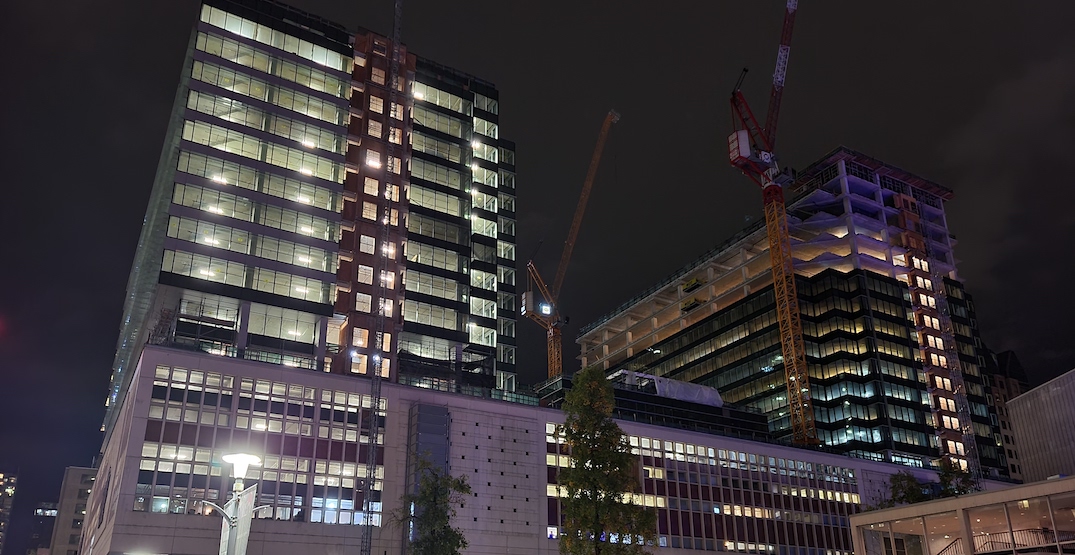 Construction progress of Amazon's The Post in downtown Vancouver, as of October 4, 2021. (Kenneth Chan/Daily Hive)

For the first time in nearly two years, since the onset of the COVID-19 pandemic, Metro Vancouver’s office market saw its first vacancy rate contraction, providing evidence of the region’s strong office market fundamentals, fuelled by the tech industry’s growth.

Metro Vancouver’s overall office vacancy rate — downtown and suburban, combined — in the fourth quarter of 2021 hovered at 7%, down from 7.4% in the third quarter.

The drop in vacancies occurred even with the completion of significant new office supply over the quarter, with 346,000 sq ft reaching completion in downtown, and 197,000 sq ft in the suburbs. About 72% of this new office space was already pre-leased.

Despite the pandemic’s ongoing impacts on the workplace, average asking lease rates in Metro Vancouver continued to rise, increasing by 9.7% year-over-year to $33.84 per sq ft.

When it comes to industrial space, CBRE states availability has dropped to a new record low of 0.9%, as of the fourth quarter of 2021. These shortage conditions persist despite 1.2 million sq ft of new construction completed during the quarter, offset by strong levels of pre-leasing due to high demand.

Currently, in response to the demand, there is a record high of 9.4 million sq ft of industrial space under construction in the fourth quarter, with 77% of this space already pre-leased.