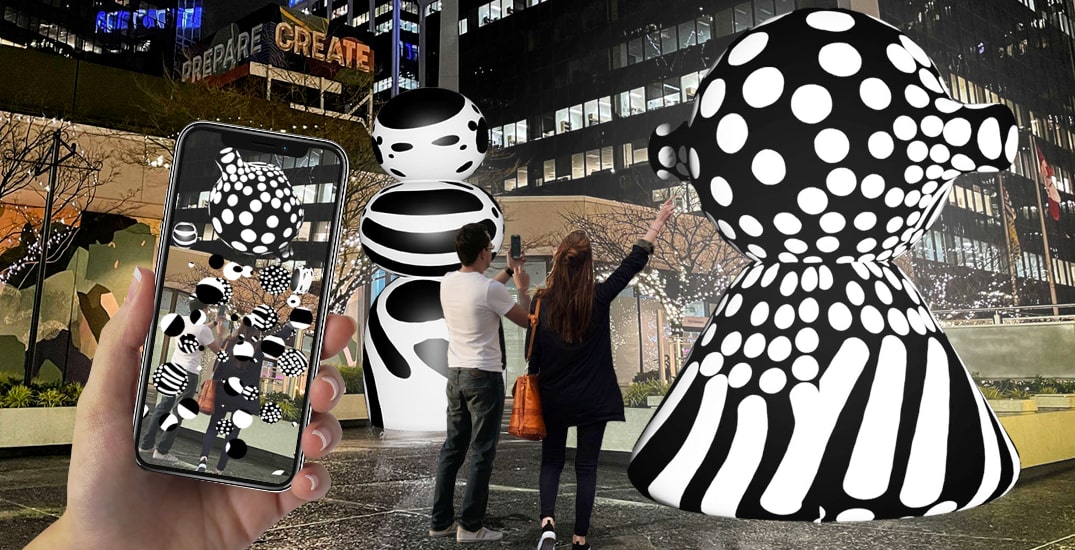 The Vancouver Mural Festival (VMF) is blurring the lines between the virtual world and the real world with the return of a popular event in February.

New for the second year is the Winter Arts Hub, which will be situated at šxwƛ ̓ ənəq Xwtl’e7énḵ Square on the north side of the Vancouver Art Gallery. The Hub will be an all-ages, licensed outdoor venue featuring art installations and a live performance stage.

The 16-day festival will showcase music, DJs, drag, and more in the heated and covered space. There will be hot (and cold) drinks and food trucks available, and even a public disco party at the Hub every Saturday.

“VMF is committed to continually reimagining how we safely bring together art and people in public space,” said Andrea Curtis, VMF Executive Director, in a release. “The past two years have highlighted the positive impact of public art and public space on community well-being—individually, collectively and economically. The success of our inaugural VMF Winter Arts festival inspired us to create an even more ambitious event to bring joy and inspiration to everyone downtown and beyond.”

VMF has a core value of diversity and inclusivity, with strong BIPOC and LGBTQIA2S+ artists in both the 2022 Winter Arts live performance and AR curation. International artists from Egpyt, Norway, New Zealand, USA and Jamaica as well as local artists from the Musqueam, Tsimshian, Snuneymuxw, Haida, Kwakwaka’wakw and Tsleil-Waututh Nations can be discovered at the festival.

Another must-see happening at Winter Arts is Blanketing the City: Lighting the Way, described by VMF as “the evolution of [the] on-going Blanketing the City series with acclaimed xwməθkwəy̓ əm [Musqueam] weaver and graphic designer Debra Sparrow.”

“This project takes the series to the next level by illuminating iconic landmarks across the city with large-scale lighting displays featuring transformed Coast Salish weaving patterns, colours and stories,” said VMF in a release. “VMF is also partnering with IM4 Lab to curate three Indigenous artists to create AR and light installations for the festival.”

Other highlights of VMF Winter Arts include guided walking tours by DeTours presented by Herschel Supply, a live and online talk series at Vancouver Public Library presented by Electronic Arts, and an interactive AR mural by Pixel Moments in support of St. Paul’s Foundation to raise awareness and funds for mental health resources.

VMF Winter Arts is produced by the team behind Vancouver Mural Festival and presented by the Downtown Vancouver Business Improvement Association. The 2021 edition recently received the Achievement Award of Excellence from the International Downtown Association, recognizing excellence in urban place management.

Download the VMF mobile app to discover all of the AR artworks during Winter Fest and over 300 murals across the city.

What: VMF Winter Arts
When: February 11 to 27, 2022
Where: Public spaces across Vancouver’s core, Yaletown, and False Creek
Cost: Free