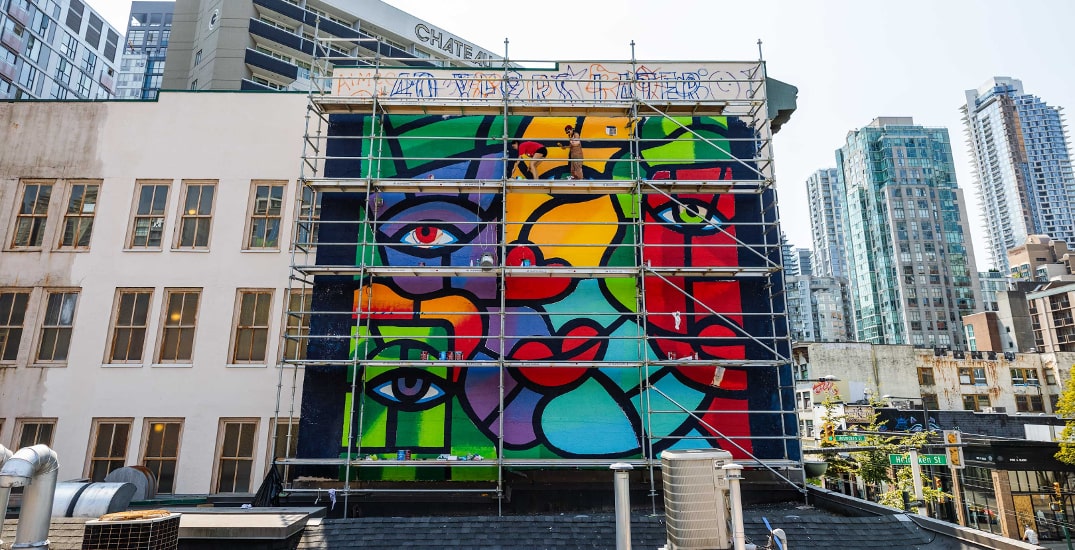 It has been a busy week for internationally-renowned Vancouver artist, philanthropist, and AIDS awareness advocate, Joe Average.

It was announced this week that Average was appointed this week to the Order of BC, the province’s highest form of recognition. His brand new mural, One World, One Hope – 40 Years Later was also unveiled as part of Vancouver Mural Fest (VMF) 2021.

Visitors to VMF 2021 can find One World, One Hope – 40 Years Later on the north wall of Helmcken House at 649 Helmcken St., high above Granville.

The mural, which was designed by Average and painted by Angelica Stirpe, is a reflection of the artist’s decades-long advocacy for people living with HIV while coping with HIV health issues himself. 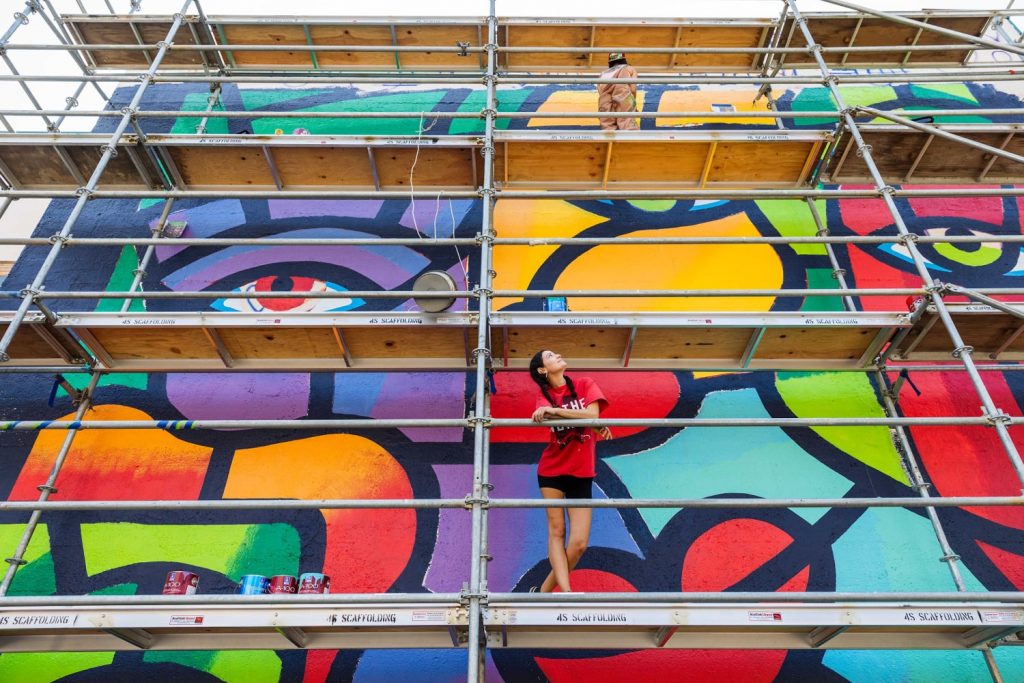 Average is among 16 Order of BC recipients who were selected out of 257 total nominees from across the province.

“This is something I never expected and I feel thrilled, humbled and, as a BC boy, incredibly proud, especially being selected along with the other wonderful recipients this year,” said Average in an interview with Daily Hive. “People might be surprised to learn that I was not honoured for my art but in recognition of my long-time philanthropic efforts. That means a great deal to me.

“At age 30, a few years into my own HIV diagnosis, I challenged myself to live solely off the proceeds of my art. Things were very tight for a very long time and, as someone who believes deeply in helping others, it was a huge regret that I couldn’t afford to give money to worthy causes in the community. Things changed once charitable organizations realized that my artwork could raise money at auction.

“I would donate drawings, paintings, prints to anyone who asked and it thrilled me to see how my work could make a difference. To be honest, that was recognition enough. This honour is really icing on the cake.”

“In 1991, I won a poster contest to mark Canada’s first national AIDS awareness week. The design became the base of the One World, One Hope image that I painted four years later for the XI International AIDS Conference held in Vancouver,” explained Average. “The stained glass effect represents the fragility of all mankind in the face of AIDS. The heart at the centre represents love, which I have always believed is the only thing that can move us forward and truly end this epidemic.

“One World, One Hope is still an image and idea that resonates today and I am thrilled that a new generation will see it as part of this year’s Vancouver Mural Festival. While forgotten by many, AIDS is still a scourge across the globe and, while we can celebrate some incredible milestones in prevention, treatment and life extension, we still have a long way to go.

“I hope this reminds everyone of the work that is still needed in education, stigma removal and funding as we continue to search for crucial treatments and vaccines. I very much hope that it starts, or at least reopens an important conversation.”

2021 marks the 40th anniversary of the first reported cases of AIDS identified in the United States.

According to Mavreen David, VMF Project Manager, Average was the “perfect choice” to be a part of this year’s festival.

“We were in the process of curating a wall for a McLaren Housing Society facility that provides housing and support services for individuals and families living with HIV/AIDS, when Joe came to mind for the project,” said David. “With his personal connection and long history of advocacy in the field of HIV/AIDS, Joe was the absolute perfect choice. He graciously obliged and the idea to use the One World, One Hope design came entirely from him.

“Given the fact that this year marks the 40th anniversary of the AIDS epidemic, it seemed like a wonderful opportunity to honour the lives lost, to uplift those who are still fighting and to acknowledge that there is still so much work to be done.”

Kim Stacey, Executive Director of McLaren Housing Society of BC agrees that One World, One Hope – 40 Years Later is a perfect fit for Helmcken House, a supportive housing project for residents living with physical, mental health and addiction challenges. 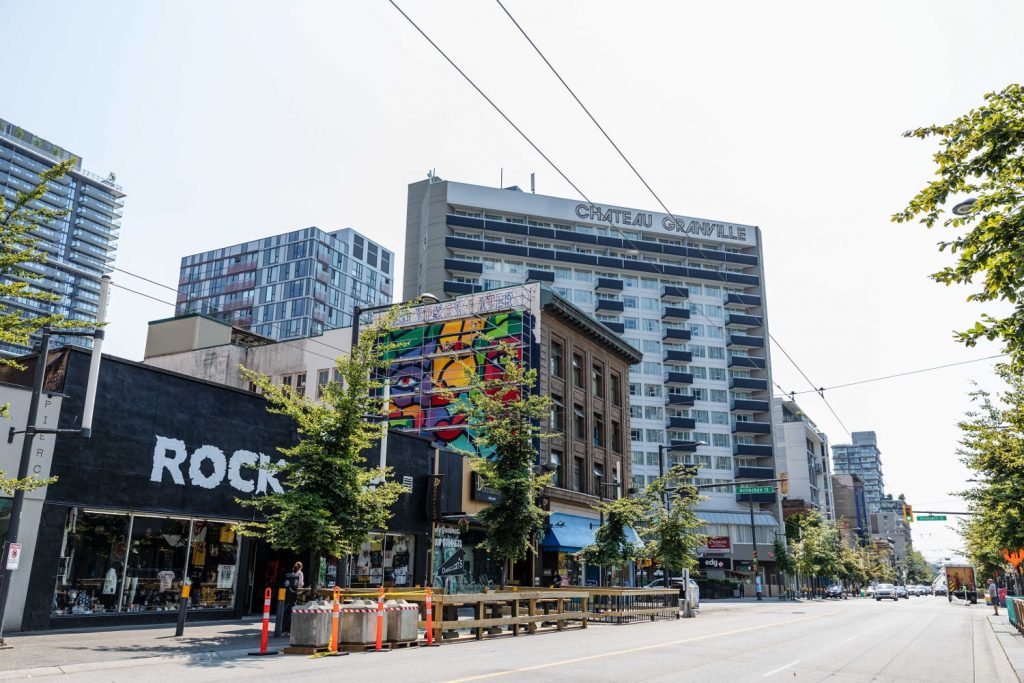 “Joe is someone who was politically active as an artist in the early days of HIV,” said Stacey. “There were organizations such as ActUp which were active politically to raise awareness of AIDs and the need for the government to provide the drugs needed and to release the drugs so people did not die. At the time, one of their logos was “silence = death”, and Joe was someone who was not silent; he spoke up for this community and was a public figure at a time when many others could not do.

“It’s an absolute honour to have Joe design and approve this mural for this building. What this mural does, it puts it back in the public realm, that forty years later HIV and AIDs is still in the community, and it’s still something that impacts people for the rest of their lives.”