The man, a Victoria resident himself, was arrested in Esquimalt, and police discovered that, in addition to being suspected in other frauds, he was carrying a cache of weapons and illegal drugs on his person.

According to police, officers were first called to a business in the 800-block of Esquimalt Road on Thursday, May 17 for a report of two men who had passed counterfeit currency.

Officers recognized one of the suspects from the description and began to search for him and his accomplice.

The next day, patrol officers were called to the 1500-block of Fort Street in Victoria at approximately 2:45 pm for a report of two men who appeared to be taking off handcuffs.

The description of one of these men matched that of one of the fraudsters from the previous day’s file. Patrol officers searched the area, but did not locate the suspects.

An hour later, patrol officers spotted them near the intersection of Douglas and Yates streets in downtown Victoria. They stopped the men to take them into custody. One of the men turned away from the officers and refused to show his hands.

He then turned back towards the officers with a knife in his hand.

An officer was able to safely disarm him and police began to take him into custody. The man then began to fight with officers and OC spray was deployed to aid in the arrest.

When this first man was searched, patrol officers discovered that he was in possession of five knives, including a prohibited switchblade, an ASP baton, bear spray, illegal drugs, a replica handgun, and over $7,000 in counterfeit currency. 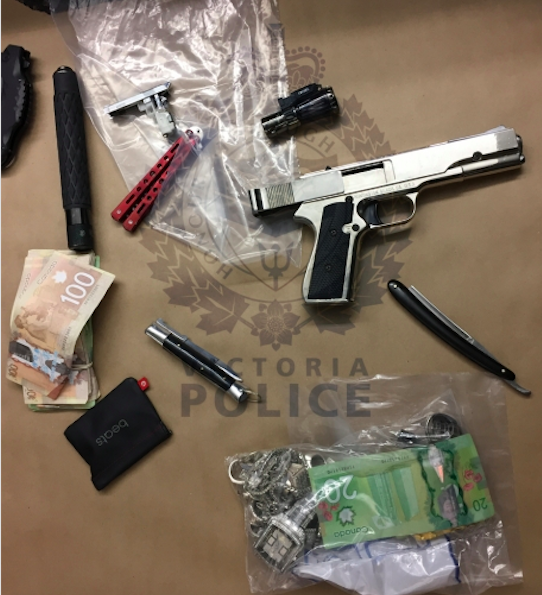 Some of the items the man was found with. (Victoria Police)

Police have since linked this man to at least two additional fraud investigations. He was held in custody for court, with officers recommending 29 charges including:

Police said they believe that in addition to these charges, the man may be involved in additional frauds involving counterfeit currency.

The second man was arrested for breaching his probation and released on a promise to appear.