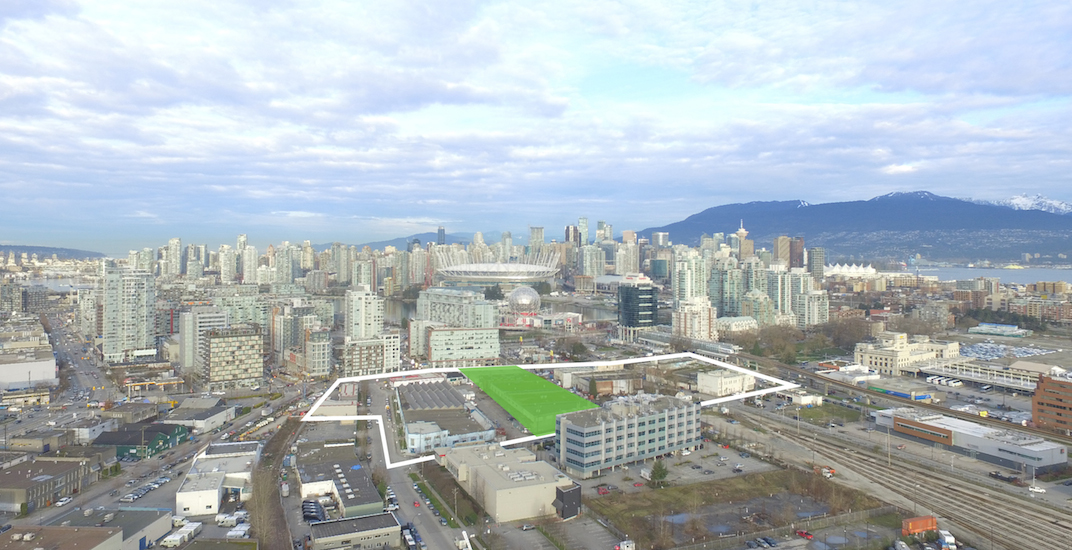 Location of the Vancouver Innovation Hub area. (City of Vancouver)

An 11-acre parcel of industrial land at the southeast corner of Main Street and Terminal Avenue is slated to become the Vancouver Innovation Hub, and the competition entails designing a smaller parcel of 1.5 acres or about 10% of the size of the whole City-owned site. 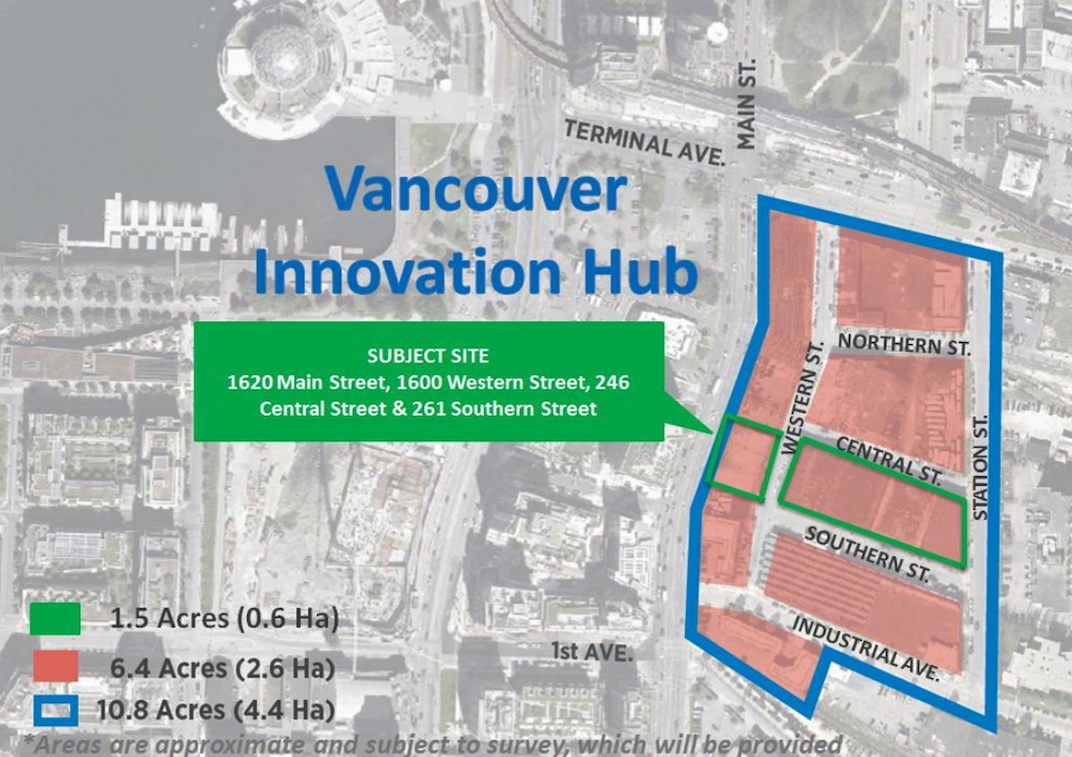 Location of the Vancouver Innovation Hub area, with the competition parcel highlighted in green. (City of Vancouver) 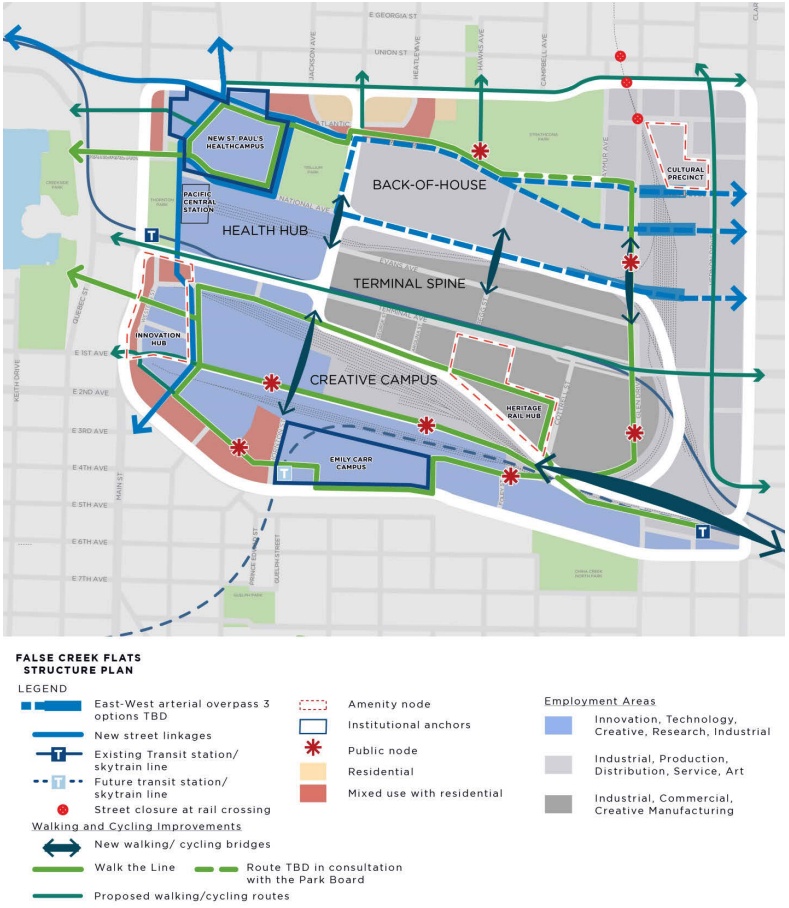 The Innovation Hub is one of the key policies in the City’s 2017-approved False Creek Flats Plan, which calls for increasing employment spaces from 8,000 to 22,000 jobs – in healthcare and the creative and tech industries – and building new homes for 3,000 residents on the Flats over 20 years.

“The City of Vancouver is seeking expressions of Interest that raise the bar on creativity, sustainability and reinvent new possibilities for mixing diverse uses in a highly public environment to support arts production, economic growth and diversification,” read the competition regulations.

Artistic rendering of the zoning changes to the area of the Vancouver Innovation Hub area. (City of Vancouver)

These commercial spaces should be considered for light industrial start-ups and accelerators, affordable industrial space for social enterprises and other uses, and market rate spaces for laboratory, digital, and other office uses.

Additionally, 50,000 sq. ft. of space for non-market industrial arts production must be built for the municipal government. This should consist of double-height spaces for the movement of large works and stage sets in and out to support the theatre productions in downtown Vancouver.

“Synergistic market uses will be encouraged to collocate with the industrial arts anchor to establish a world-class centre of art production and cultural economy,” continue the regulations.

About 11,400 sq. ft. of the lot will be need to set aside for a public plaza that runs through the north-south spine of the entire Innovation Hub. 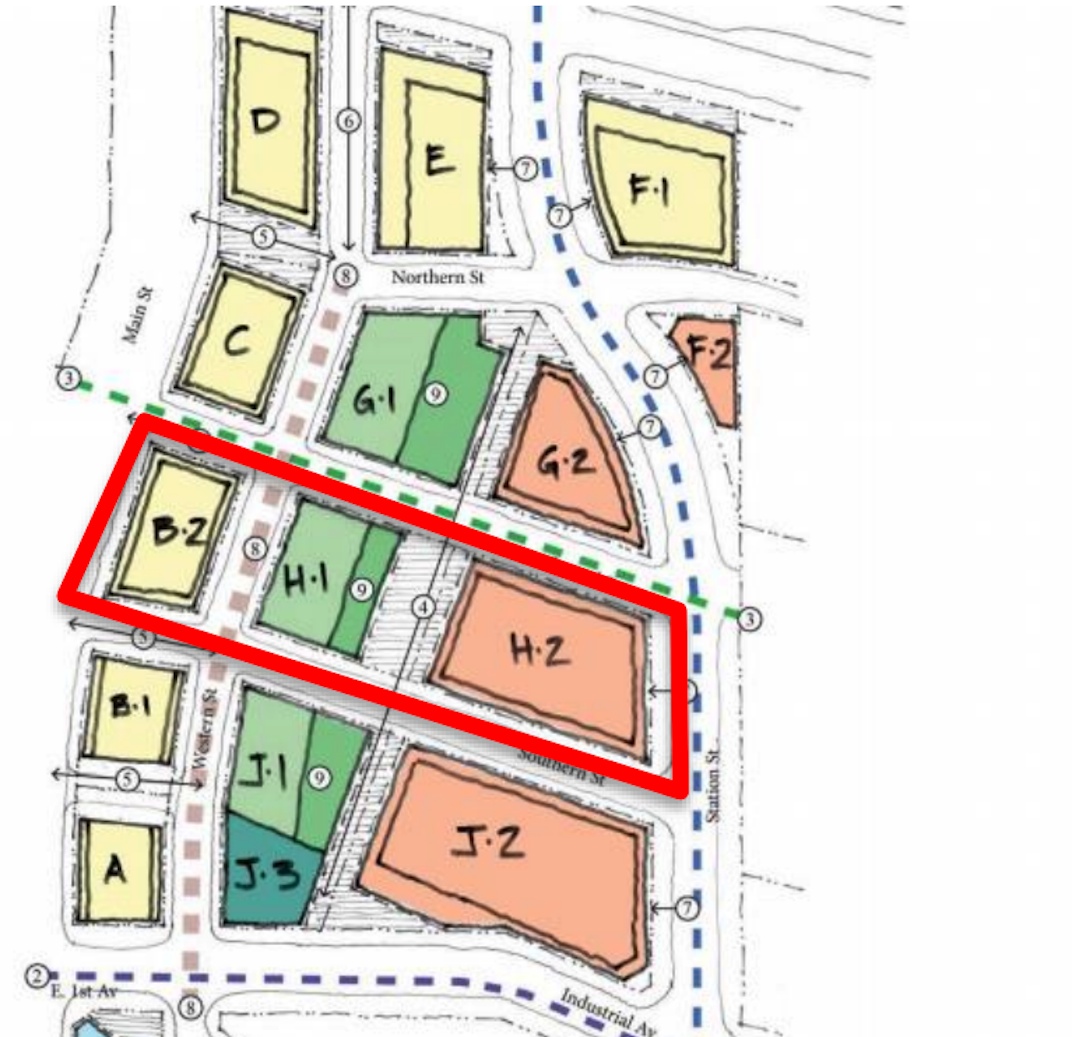 Location of the Vancouver Innovation Hub area, with the competition parcel highlighted in red. (City of Vancouver)

The winning design submission will not only “unlock potential opportunities on the site” but could also set a new benchmark or standard in design that could be applied across the entire district.

“These spaces will serve as an extension of the workplaces surrounding it and create opportunities for public showcase of Vancouver’s leading companies of innovation.”

Other considerations relate to creating ground floor space that activates the streets and public realm, and presenting “unique solutions” to the new street grid in the area, such as car-free and car-light streets with high-quality walking and cycling amenities.

The successful proponent will lease the 1.5-acre site from the municipal government over a 99-year term. Teams that are interested in submitting proposals must state their interest no later than June 15.

This competition is part of a wider ‘Reinventing Cities’ open source international competition. A total of 19 cities are offering urban sites for new developments that will be global model examples of projects that “drive carbon neutral and resilient urban regeneration.”

“Not only will the bidder teams need to creatively address both content and form, they will also need to demonstrate that environmental performances can be achieved in combination with noteworthy architecture and community benefits, keeping in mind the potential for duplicating their approach across the city and elsewhere in the world,” reads the competition description on Reinventing Cities’ website.

A similar project is being engaged in Toronto as part of the Waterfront Toronto redevelopment, except that it is being internally corporately driven by a partnership with Google’s Sidewalk Labs.

The tech giant will redevelop a 12-acre City-owned parcel on Toronto’s eastern waterfront into a model environmentally friendly mixed-use district with housing and job-creating spaces. It is the first part of the overall 800-acre revitalization of the industrial lands east of downtown on the Lake Ontario waterfront.