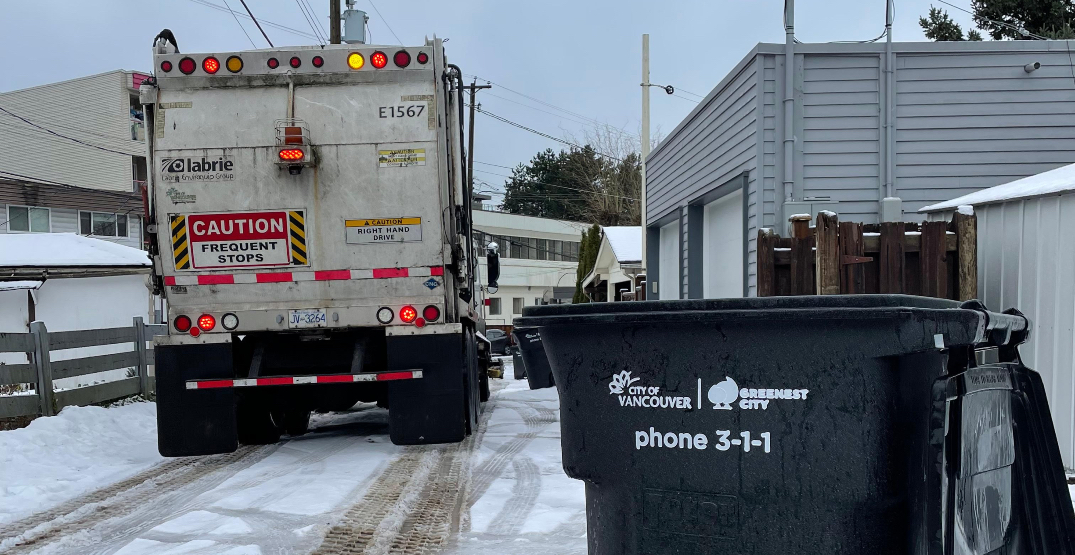 Vancouver is feeling the after effects of an intense snowfall this winter as garbage and green bin pickup delays and backlogs continue.

“Missed garbage and green bin collection is the result of significant snowfall and then accumulation of ice in laneways,” a city representative told Daily Hive.

“Green bin collection was suspended on December 28, 2021 and resumed January 10, 2022.” Some Vancouver residents went almost two weeks without pickup right after the holidays. “Garbage collection was cancelled for December 30 and 31 only.”

Garbage pick-up continues in scheduled zones today where it’s safe to do so. Crews will circle back to check outstanding areas as the day progresses. If necessary, crews will work on the weekend to complete all outstanding garbage routes prior to green bin resuming Jan 10. 📅 pic.twitter.com/Vk0EOmfQOW

“With warmer temperatures and complete snow/ice melt, we’re now able to catch up and service all missed areas. If they’ve been missed, residents are asked to leave their bins out in their regular collection area for servicing this weekend,” said the city rep.

As garbage piled up, people were sharing their frustrations on Twitter, sharing stories of reaching the city for help and snaps of overflowing bins.

Spelled Vancouver wrong. Your acct is not set up to send DMs even when we follow. Anyway, tweet it is. Garbage not picked up since Dec. 29. Today at least containers, glass and paper gone. Still main and food garbage crazy. pic.twitter.com/ICzqGhnYsu

It’s been nearly a month since garbage was collected,last time was december 16. I have called The City twice , was told to leave the bins outside! Nothing yet! No back alley excuse here as The garbage has to be collected in a main bike street! #westend #vancouver

According to the city, they’ve also had to delay their Christmas tree recycling pickup program because crews have their hands full.

Now, city-wide tree collection will happen on January 22 and 23, a week later than it was originally scheduled.

Crews are working to clear the backlog of missed garbage and green bin collections this weekend and as a result, city-wide tree collection has been postponed to January 22-23. https://t.co/O7Lq61jLOV pic.twitter.com/lx4P08pyQ7

If you still have a Christmas tree that you were hoping to recycle, then you have two options.

You can either cut it up into pieces (smaller than 10 cm in diameter and shorter than 50 cm) and stick it into Vancouver’s regular Green Bin service.

Or, you can join in the curbside collection. To prep your tree for pick up, get it out before 7 am on Saturday, January 22. Lay the tree on its side by the bins and leave it loose – no ropes or strings.