The new property tax rate for foreign buyers of Vancouver real estate has led to a drop in home prices, according to a note issued by a BMO Capital Markets economist.

The rate, which came into force in August last year, means foreign buyers have to pay an extra 15% property transfer tax when they buy real estate in Metro Vancouver.

No official word has been issued as to whether the new rate has caused the intended drop in home prices, but according to BMO’s Douglas Porter, there is a correlation there.

In a client note issued earlier this week, titled “One Way to Tame House Prices”, Porter said the issue of home affordability remains a hot topic in Canada and offered up this chart: 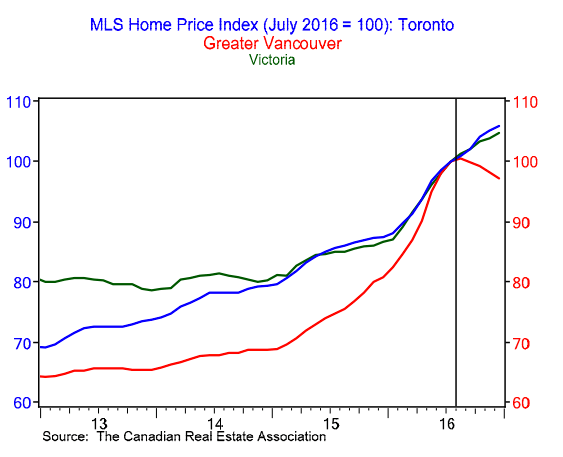 The vertical line represents the moment when the new tax rate was imposed, and although Porter doesn’t explicitly link the tax and the subsequent drop in real estate prices, he does say this.

“We have enough history now to distinguish the clear divergence between Vancouver (down) and Toronto (still straight up),” writes Porter in the note.

“And, in case there was any doubt what force is at play, note that Victoria has tracked closer to Toronto’s behaviour than Vancouver’s (no tax in Victoria either).”

The proportion of home sales involving foreign nationals in Metro Vancouver do seem to have plunged since the introduction of the foreign buyers tax, says the province.

At least, that’s according to figures released in October, which showed only 1.3% of residential property transfers involved foreign buyers from August 2 to September 30.

That’s a huge drop from 13.2% – the proportion of home sales which involved foreign nationals between June 10 and August 1.

And of course, correlation is not cause. So only time will tell, we guess.