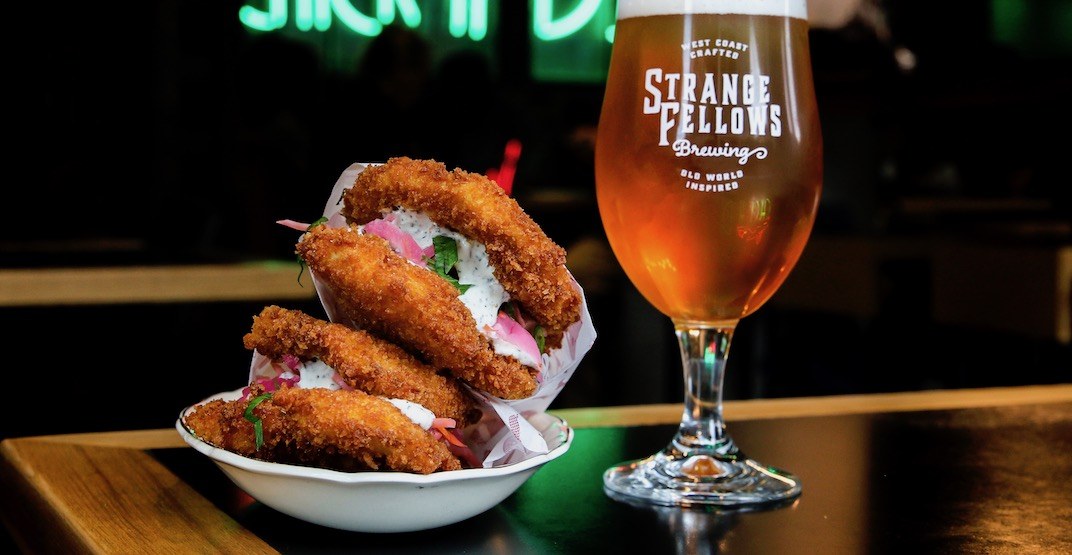 Holy mother of pumpkin spice, how the heck is it already October?

September flew by, but we’re not really complaining, because October has some seriously epic occasions, holidays, and reason to eat and drink.

Oktoberfest, Thanksgiving, Halloween – it’s officially time to stuff your face and drink and be merry, Vancouver.

Make use of this delicious list and tick off the events one by one,

Food events to check out in Vancouver this October

This multi-course feast is brought to us by Wildebeest in partnership with The Prisoner Wine Co. Enjoy wines and five courses that “celebrate the peak of autumn goodness.”

Boulevard Kitchen & Oyster Bar will host its second Vegan Harvest Dinner on October 3. Each dinner will showcase the creativity of Chef Alex Chen when it comes to vegan cuisine.

BREWHALL’s Oktoberfest event starts September 23 and runs for two weeks. It will feature traditional food and drink features to various games and contests. On each Saturday of the festival, BREWHALL will be hosting a costume contest starting at 8 pm. Guests are encouraged to dress up in their best lederhosen or dirndl for the chance to win a $50 gift card.

Head to 4875 Victoria Drive for one of the many dates this party is going down. There will be German food, beer, and live music all night long.

A 19+ Harry Potter-inspired beer, cider, and cocktail festival is slated to go down in Vancouver next week. Attendees will enjoy “unlimited tastings” of Hagrid’s local craft brews, along with Dumbledore’s delicious ciders too. There will also be boozy butterbeer and specialty shots like “Liquid Luck” and “Polyjuice Potion” that you can enjoy in Snape’s lounge.

Papi’s Seafood and Oyster Bar Chef Max Straczek will welcome The Food Network Canada’s Top Chef Canada TV series when he welcomes Mark Singson and Wallace Wong to the line for a Papi’s and Friend’s Collaborative Chefs Dinner on October 5.

While this shindig featuring beer and pretzels is a FREE all-day event, you can guarantee your spot by purchasing tickets for the festivities early. Enjoy four house-brewed German-style beers, along with a few special surprises.

When: October 5 from noon to 10 pm
Where: Another Beer Co – 30 Capilano Way Unit 11, New Westminster

The Dreadnoughts/Polka Time! Oktoberfest at The Cambie

Enjoy a glass of house sangria or Estrella Damm Spanish lager before a three-course dinner with Alex Chen’s Spanish-inspired West Coast Paella as the main.

Join over 150 professionals from Vancouver’s marketing, media, and communications industry at this annual event. Tickets include one complimentary drink.

It’s baaack. Harvest Haus returns for its fifth year of Bavarian-style merrymaking, including traditional eats, music, and of course, tons of beer.

This spot will celebrate its 30-year anniversary this year by offering a special limited-edition menu on offer from October 16 to November 28. The prix-fixe menu will honour the milestone by bringing back fan favourites and classic dishes from the restaurant’s original menu when it first debuted back in 1989.

When: October 16 to November 30
Where: Seasons In The Park – W 33rd Avenue, Vancouver

The annual food fest is returning for its 15th year of special menus, tasting plates, and expert pairings in the restaurants of one of Vancouver’s swankiest downtown neighbourhoods. Diners can enjoy a variety of three-course set menus from participating restaurants, each with a special fixed price of either $35, $45, or $55 for 11 delicious days in a row.

When: October 17 to 30
Where: Participating restaurants in Yaletown

When: October 17 to 30
Where: Wildebeest – 120 W Hastings Street, Vancouver
Price: $60 per person, $32 for additional beverage pairing

Wildebeest will feature a Fall Game and Mushroom Menu available from October 17 through 30. The new menu follows the lead of the restaurant’s recent Spring Field and Forest and Summer Farmers’ Harvest menus.

The Kitchen Table Restaurants are celebrating International Pasta Day with a pasta feature at Vancouver’s Pourhouse, Ask For Luigi and Ristorante Di Beppe and North Vancouver’s newly opened Farina a Legna on October 17. Spaghetti Aglio e Olio (spaghetti with garlic and oil) will be up for order a half-price ($9).

When: October 17
Where: Kitchen Table Restaurants

Get ready to take a bite out of North America’s best Asian culinary scene, because a 32-day Asian food festival is happening in Richmond this fall. FEAST: Asian Dining Festival kicks off on October 18 and runs through November 18, 2019, this year. Urging diners to broaden their horizons and try a variety of Richmond restaurants – old and new – FEAST allows diners to indulge family-style.

When: October 18 to November 18
Where: Participating restaurants in Richmond

This wine-fuelled long table pop-up dinner is all about BBQ this time. Chef Nick Menzies will be rustling up a multi-course feast of North American and European-inspired BBQ dishes.

Teams of up to six are invited to take part in five rounds of questions on all things hip hop. There will be food and drink specials and prizes up for grabs too. Sign up as an individual or a team of up to six via email ([email protected]), Instagram, or Facebook to guarantee a spot, or simply walk-in night-of.

Chef Mark Burton, the students of Pacific Institute of Culinary Arts, and Deep Cove Brewers & Distillers will be serving up a family-style BBQ feast at this Beer Meets Grill collab dinner.