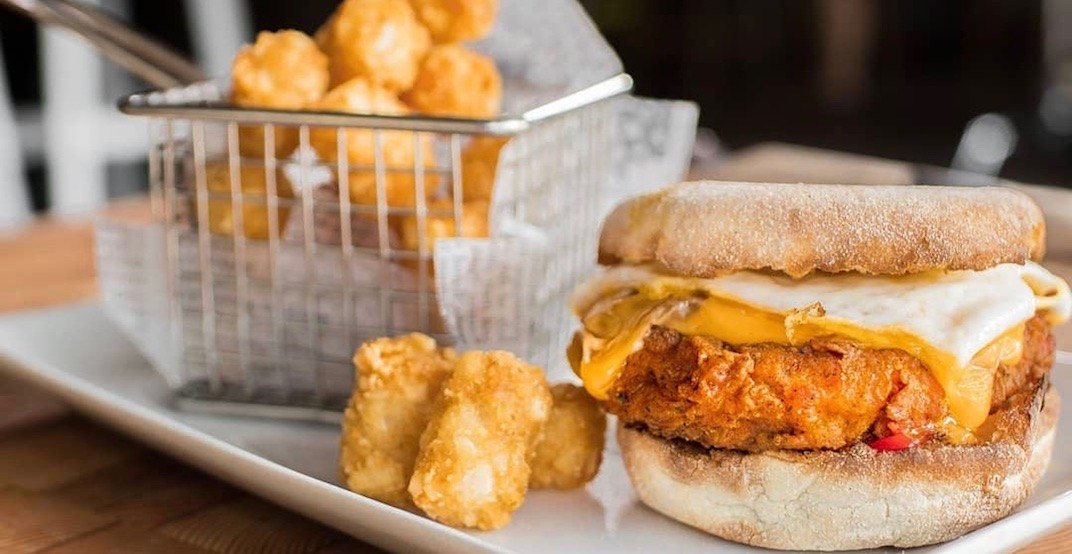 See ya later February, you were short and definitely not sweet in terms of weather.

March is basically here, which means another month full of drool-worthy food and beverage-centric events in Vancouver are about to go down.

From traditional St. Patrick’s Day celebrations to FREE pancakes – here are some epic Vancouver food events to check out this March.

A number of local businesses have partnered with the BC SPCA and pledged to donate a portion of proceeds from certain treats sold between February 25 to March 3 to support abandoned, abused, or neglected animals. The participating venues include Beaucoup Bakery, Butter Baked Goods, DALINA, and La Glace to name a few. Check out more details online and see the full list of participants.

When: February 25 to March 3
Where: Multiple venues around Vancouver

Enjoy this monthly social gathering where guests can purchase craft beer, wine, and cocktails along with food features. There will be rotating DJs too.

Newly re-branded Flourist (formerly GRAIN) will be popping up at Di Beppe on March 2 from noon to 4 pm. Expect fresh-baked sourdough breads, baked goods, savoury galettes, fudgy brownies, and a selection of dry goods like the brand’s flours. Pre-orders are available too.

When: March 2 from noon to 4 pm
Where: Di Beppe – 8 West Cordova Street, Vancouver

When: Sundays at 9 pm starting March 3
Where: Bells and Whistles – 3296 Fraser Street, Vancouver

A part of the annual Vancouver International Wine Festival, the Vintner’s Brunch attendees will experience eats and wine from four of Vancouver’s top restaurants and caterers, including Origo Club, Royal Dinette, Bauhaus, and more.

Brought to us by the Vancouver Buddhist Temple, this “food bazaar” is small but mighty, and will feature eats such as maki sushi, saba sushi, chicken teriyaki, sweet sticky rice balls, Japanese Steamed cake, udon noodles, and more.

When: March 3 from noon to 2 pm
Where: 220 Jackson Avenue, Vancouver

Anyone who heads into a participating Canadian Dairy Queen restaurant and purchases a Blizzard (any size, any kind) can get another one of lesser or equal value for just $0.99  – which is basically free. This promo runs from March 8 to 17, so be sure to get in on this cheap deal before then.

When: March 8 to 27
Where: Dairy Queens across Canada

Steve’s Poké Bar will be offering $5 poke bowls at its fourth location in Coquitlam on March 9. The 1163 Pinetree Way shop in Henderson Mall will be serving up cheap bowls to anyone who brings their own bowl in regular or large sizes from 11 am to 8 pm.

Enjoy brews from 45+ BC breweries, along with local far at this festival of all things beer. Attendees can expect a new food vendor market too.

The highly-anticipated Curry Cup returns to Vancouver next month for its sixth year of curry mania. This annual event will go down on March 11 at Heritage Hall on Main Street, where seven chefs and three culinary instructor-led student teams will compete to see who has created the most outstanding curry of the evening.

On Tuesday, March 12 you can head to any IHOP Canada location and get in on a piping hot short stack of Original Buttermilk Pancakes.  IHOP Free Pancake Day helps children battling critical illnesses, every stack served on March 12 helps the American pancake house “Flip it Forward for Kids.”

When: March 12
Where: Participating IHOPs across Canada

Liberty Merchant Company proudly presents the 7th Annual East Side Beer Fest tasting event. The evening will feature craft beers from BC and around the world, along with a silent auction and door prize.

When: March 13 from 7 to 9 pm
Where: The Wise Hall & Lounge – 1882 Adanac Street, Vancouver
Price: $29.99 plus a non-perishable food donation; buy tickets at Liberty Wine Merchants locations

This Gastown gem will be offering food and drink specials for St. Patrick’s Day. Think Guinness doughnuts, rashers and eggs, fish and chips, and a proper Full Irish Breakfast. To drink, Irish Coffees and Boilermakers (a pint of beer and a shot of whisky) will be on special for those who want to start the party early.

This hip-hop brunch party offers ticketholders three mimosa’s plus one brunch items from 12:30 to 2 pm, along with a party that continues until 6 pm.

Royal Dinette and Four Winds Brewing Co are teaming up for a seasonally-focused beer-paired menu. Guests will enjoy a Canadian/Australian inspired menu paired with a selection of bottle-conditioned beers flavoured with ingredients from BC’s last summer harvest.

On March 14 dine out for breakfast, lunch, or dinner at participating restaurants from Whistler to White Rock and across the Lower Mainland. Enjoy some of the best dishes the region has to offer while supporting people living with HIV/AIDS. Restaurant partners will contribute a portion of their food sales to A Loving Spoonful.

When: March 22
Where: Participating restaurants

Taking place on March 21, 2019, the Vancouver edition will feature seven participating restaurants and one eatery in Kelowna too. Chefs from each respective eatery will be cooking up a French-style dinner with a focus on environmental and resource preventions, and the spotlight region for each spread this year is Provence.

When: March 21, 2019
Where: Participating restaurants around Vancouver

This dinner features Road 13 Sparkling Chenin Blanc with Smoked Salmon Blinis and Read Island Oysters to start, followed by a sit down four-course dinner with pairings kicking off at 7 pm.