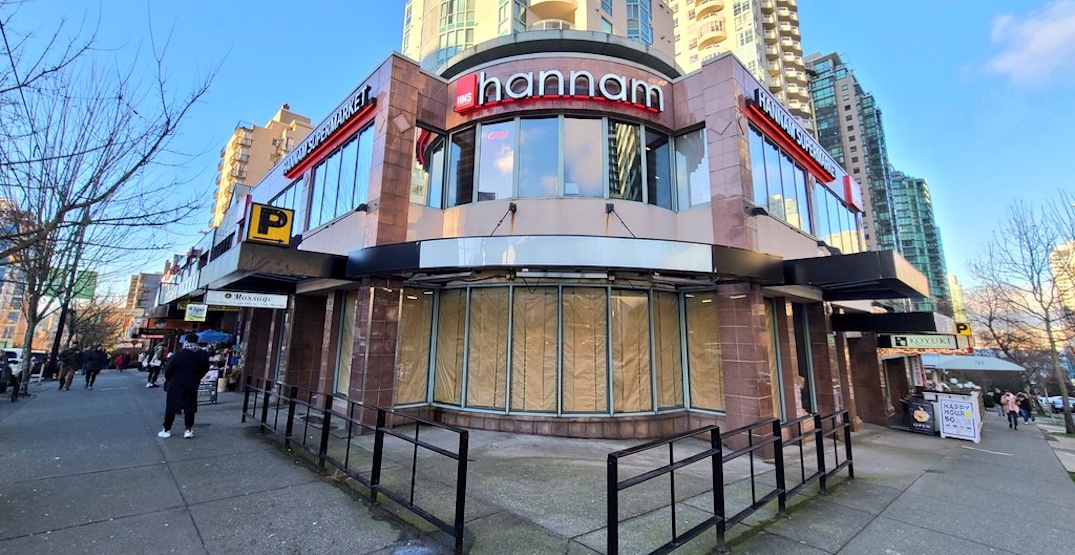 Starbucks closed many locations across downtown Vancouver earlier in the pandemic, including the cafe at the corner of Jervis and Robson streets. This retail unit, previously Cow's Ice Cream, has since reverted to an ice cream shop for Bella Gelateria. (Kenneth Chan/Daily Hive)

Could the City of Vancouver’s Empty Homes Tax regime be replicated for the same effect on commercial retail businesses?

The creation of an Empty Stores Tax was suggested by Vancouver Mayor Kennedy Stewart during Tuesday night’s meeting on the distribution of the property tax.

“Now that we’ve been so effective with the Empty Homes Tax and forcing residential properties into the rental market, investors are buying commercial properties, waiting for them to deteriorate, and that’s to our detriment with up to 20% vacancies in some neighbourhoods,” said Stewart.

“This could be a tool that we could explore, it has been effective in one case, and I hope it’s effective in another.”

Vancouver City Council does not have the jurisdictional authority to implement an Empty Stores Tax on its own. Similar to its previous process in 2016 for enacting the Empty Homes Tax, it needs the provincial government to introduce legislation to change the Vancouver Charter.

Green Party councillor Adriane Carr said she “wholeheartedly supports” an Empty Stores Tax as “storefronts that are not boarded up and inactive are a blight in the neighbourhood in how they decrease the public interaction and liveliness.”

Michael Wiebe, a Green Party councillor who is known for having an ownership stake in two restaurant establishments, stated business improvement associations (BIAs) have been looking at ways to better utilize empty storefronts in their districts, including for culture and non-profit organizations, and business incubators. He suggested an Empty Stores Tax could be based on a vacancy duration scale, such as one year, three years, and five years, for example.

“Some of the conversations I’ve had with BIAs is that it’d have to be vacant for a long period of time, recognizing [the processing time of] our permits and licensing, and some of the change in use bylaws that we have,” said Wiebe.

Green Party councillor Pete Fry also called Stewart’s proposal “a thoughtful amendment” and suggested “it would be disingenuous to believe there are not properties being held vacant.”

But Bligh contested the assumed positive impacts that an Empty Stores Tax could have, suggesting that more time is needed to understand how such a policy could have negative effects and unintended consequences.

“There seems to be an immediate assumption that something like this would actually help and not harm that situation and make it worse than it already is. Fundamentally, homeownership versus a commercial landlord… they’re not even in the same realm,” said Bligh.

“So to think that something like the Empty Homes Tax would have the sort of direct benefit that we’ve seen in a commercial context is really naive, and needs much more discussion and wholesome investigation. Even just tacking this on to the amendment is an endorsement of this council that we support a tax on empty commercial properties, and none of this really understanding fully what the implications are. I think it shows a lack of understanding in terms of how the commercial real estate world works.”

Stewart’s Empty Homes Tax exploration amendment was tacked on to Kirby-Yung’s amendment asking the mayor to request the provincial government to express the city’s strong support for implementing a Split-Tax Assessment to support struggling businesses, and arts, culture, and non-profit organizations.

“In fact, [landlords] want to ensure the storefronts are occupied, and they lament a high vacancy rate as they are in the business of having spaces occupied in a way that is sustainable, so that they can sustain those properties,” said Kirby-Yung.

Unlike the sudden proposal for the Empty Stores Tax, Kirby-Yung stated there is broad support from the business community for a Split-Tax Assessment based on outreach that involved the provincial government in 2019.

Kirby-Yung added that meaningful research and consultation are needed with businesses and BIAs and suggested that very few commercial property owners want to hold vacant property.

The BIA that represents Chinatown strongly disagrees that an Empty Stores Tax would address the complex conditions and factors that are the driving forces of the high vacancies in the historic district.

“It appears this motion was tabled without thought and consideration,” Jordan Eng, the president of the Chinatown Business Improvement Association, told Daily Hive Urbanized.

“The business community has been suffering through two years of the pandemic with many small mom and pop businesses closing, leaving a path of vacant stores throughout the City.  This is an unwelcome hammer approach as property owners that pay property taxes to support services look to restore their neighbourhoods.”

Eng says this will most severely affect Chinatown, as well as Gastown, Strathcona, and the Downtown Eastside, which are “the epicentre of the opioid and mental health crisis, and where property owners struggle to find tenants that are able to operate viable businesses within this environment.”

He says the city is also facing challenges with leasing the retail units within the city-owned Chinatown Parkade Plaza, which is currently seeing a 73% vacancy rate. In addition, some retail units at the indoor complex have been vacant for a decade.

A sizeable proportion of storefront vacancies, especially in the ongoing pandemic environment, are driven by the reduced foot traffic — compared to the pre-pandemic period. Work-from-home arrangements for office workers continue to be an overwhelming factor in lowering foot traffic volumes in downtown Vancouver. According to commercial real estate firm Avison Young’s Office Vitality Index, foot traffic in downtown Vancouver this month was about 75% below pre-pandemic volumes.

Nolan Marshall III, the president and CEO of the Downtown Vancouver Business Improvement Association (DVBIA), asserted the city’s attention and resources would be more effective if it were to address the delays in permitting and the resulting major impacts on the feasibility of starting a business and adding to storefront vacancies.

“I’m disappointed that the DVBIA and our business owners were not consulted on this proposal. The City needs to prioritize eliminating permit delays and red tape for opening a street-level business before trying to tax the problem away. A tax on property owners will not address the root issues behind commercial vacancies. It will not address the high costs of opening a business or the labour shortage,” Marshall told Daily Hive Urbanized.

“We’d also like to see the City take meaningful and immediate action to improve public safety and decrease property crime in our retail corridors. These are the steps we’ve repeatedly told city leaders are necessary to support our economic recovery.”

Martin Moriarty, the senior vice-president of investments and leasing for commercial real estate firm Marcus & Millichap, one of Vancouver’s most prominent firms for leasing retail and restaurant storefront units, says the proposal is “unreasonable, unjust and ill advised,” and also suggested permitting delays should be tackled instead.

“The concept of an Empty Stores Tax, in our opinion, shows a disconnect to the reality of current retail environment and does not offer a solution to vacancy. We have just come out one of the most tumultuous times worldwide where Vancouver has outperformed mosts comparable urban marketplaces. This is a global issue plaguing urban centres and not a landlord driven Vancouver problem,” Moriarty told Daily Hive Urbanized.

“One of the biggest challenges continuing to face landlord and tenants today is the lengthy timelines imposed on them the permitting process. We would suggest that the mayor focuses on that item rather than the creation of yet another inefficient, headline-seeking tax.”

A study performed just before the pandemic by LOCO BC found that the average economic loss per business permit or licence due to the City of Vancouver’s permitting delays is $722,000, with each week of wait time resulting in an average loss of about $31,200 per business, which includes opportunity costs.

This includes weekly losses of $18,903 in revenue for the business, $5,395 in sales for supply chain providers, $5,044 in income from the new employment the business could have generated, and $1,818 from leasing costs.

More recently, the city has made some improvements to simplify business use classifications and improve the efficiency of its permitting system, but significant changes are necessary to adequately address persistent long wait times.

Later today, city council is also scheduled to debate the mayor’s member motion calling for the Empty Homes Tax to be hiked from 3% in 2021 to 5% starting in 2022.