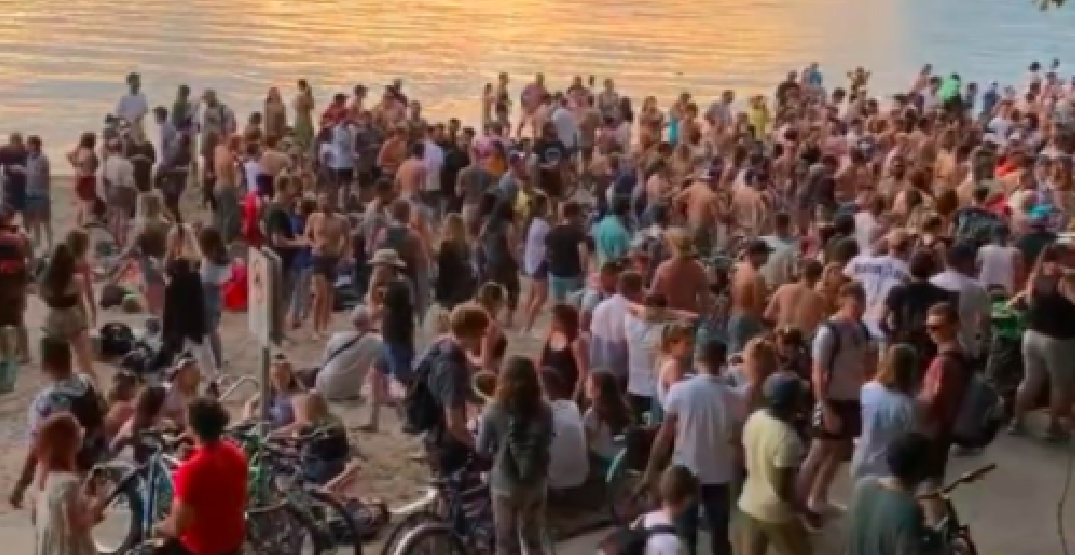 The crowd at Third Beach on Tuesday (@schaaptop / Twitter)

Advice from BC health officials around physical distancing and social gatherings appeared to go unheeded on Tuesday evening, as a large crowd gathered at Third Beach in Vancouver for a long-running weekly drum circle event.

The scene was captured and shared on social media by West End resident, Ryan Schaap.

Schaap told Daily Hive he was at the beach on Monday and Tuesday evening, and “both nights had a large drum circle.”

Schaap captured footage of the scene and shared it on social media Tuesday evening with the caption: “This is just offensive.”

This is just offensive. pic.twitter.com/2NXNuyZWGa

Known as the Brahm’s Tams drum circle, the weekly event began over a decade ago.

Earlier this spring, the group said on Facebook that the gathering was being put on hold “until the authorities say large gatherings are again permitted.”

However, as of today, BC’s restrictions around 50-people crowds are still in effect.

The scene comes after Provincial Health Officer Dr. Bonnie Henry said on Monday that BC is on the “edge” of explosive growth in coronavirus cases.

“We are at a turning point. Right now we see concerning upward trends in infection rate, in reproduction rate,” she said. “If we increase our social interactions too much without doing it safely, we do risk a rebound that will impact us all.”

BC Premier John Horgan also announced this week that th provincial government is extending British Columbia’s state of emergency for another two weeks, as the COVID-19 pandemic continues.

The announcement comes after a concerning spike in cases, including 102 reported cases over the past weekend alone. The government’s most recent extension will remain in effect until the end of Tuesday, August 4, 2020.