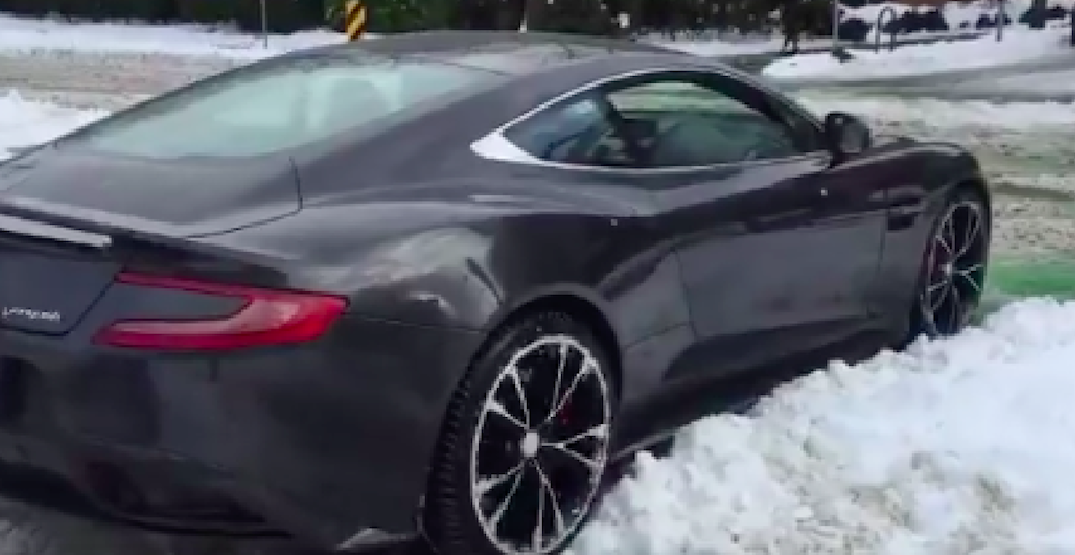 While Metro Vancouver motorists were told to basically stay off the streets and avoid driving during the snow this week, some drivers decided to give it a go anyway.

Take, for example, the driver of this Aston Martin, who began his journey – or at least attempted to – to the neighbourhood of Kitsilano.

To the surprise of no one, it wasn’t exactly a smooth trip.

Twitter user @wrychrd came upon the scene, where the driver was already having trouble, and chronicled how the situation played out.

Hey @VancouverPD @icbc This guy was driving around with tires that did not work the snow at all. He drove illegally down the bike lane and got stuck and blocked a crosswalk by a school. He obviously not capable of safely & responsibility driving especially high speed sports car. https://t.co/HB6LHC63cE

Guy in Austin Martin sports car was stuck in snow at Maple & York. Five guys help him escape. He then proceeds down the bike lane only to get stuck at Cypress on the raised crosswalk (they are great traffic calming!!!). A couple of guys and myself give him a push freeing him … pic.twitter.com/A9VDwA96zl

But that freedom proved to be short-lived.

… temporarily. He got stuck again in middle of Cypress on a totally flat spot. A couple of guys give him a push … pic.twitter.com/VDANE7jRjq

This week, road and weather conditions got so bad that the BC government took the extraordinary step of advising motorists in the Lower Mainland to stay off the roads altogether.

“Because of extreme winter weather, motorists are advised to avoid all but essential travel throughout the Metro Vancouver region today, including the Fraser Valley,” said the BC Government in a release.

And as it turns out, even so-called supercars are no match for the snow in Vancouver.