A forecaster with Avalanche Canada is recommending that extra caution be taken for anyone looking to venture into British Columbia’s backcountry this weekend.

Colin Garritty, Avalanche Forecaster with Avalanche Canada, says that avalanche danger will be on the rise after the stormy conditions predicted for Friday night. According to Environment Canada, a Pacific storm is expected to bring snow, freezing rain, and heavy winds to the region.

“With the incoming storm and the snowfall over the last weeks, we see avalanche danger rise with new snow coming,” Garrity tells Daily Hive in an interview. “As it accumulates, it stays unstable for a period of time on steeper slopes. As it settles and bonds together, it forms labs of snow that haven’t fully bonded with the surface yet.”

“We call this a storm slab,” he continues. “It’s a short term avalanche problem that can affect widespread areas — it’s an effect of new snow on older surface and it becomes more reactive due to skis, snow machines, and other kinds of human activity.” 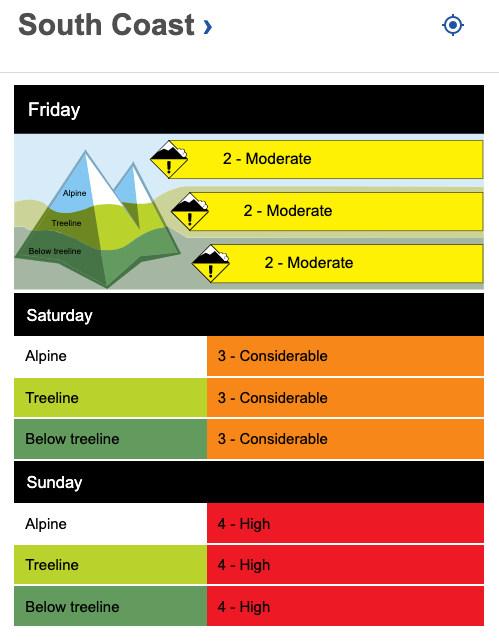 Garrity says that the South Coast and Sea to Sky regions are “a lot warmer” which “aids slab formation and creates warm snow that consolidates quite quickly.” In addition, warmer temperatures and rainy conditions can slushy avalanches. Those who plan to stay within the designated runs of ski hills likely don’t need to be concerned, however.

“There’s largely no risk for regulars within the boundaries of ski areas,” he adds. “Ski patrol works really hard so that the public exposed to them. If you see that a route is closed and you’re hearing small explosions, those are ski patrols trying to eliminate and initiate avalanches on their routes.”

“As soon as you exit the boundary then that’s avalanche terrain.”

Anyone who does wish to venture into the backcountry is reminded to have the proper equipment and adequate training before doing so.

“Our core message is to get the gear, get the training, and get the forecast,” says Garritty. “A modern digital transceiver ensures that someone can be found and searched for if they can’t be seen. An avalanche probe allows someone to poke beneath the snow surface and a snow shovel is so someone can dig under the snow.”

Garrity also says that Avalanche Canada training courses can be offered all over the province and that more information on how to fully prepare can be found on their website. Avalanche Canada also shares three-day forecasts with expected terrain conditions at different altitudes.

“Avalanche danger varies regionally,” says Garrity. “Pick the region you’ll be recreating in. Conditions over the next few days are going to change quite rapidly due to new snow.”