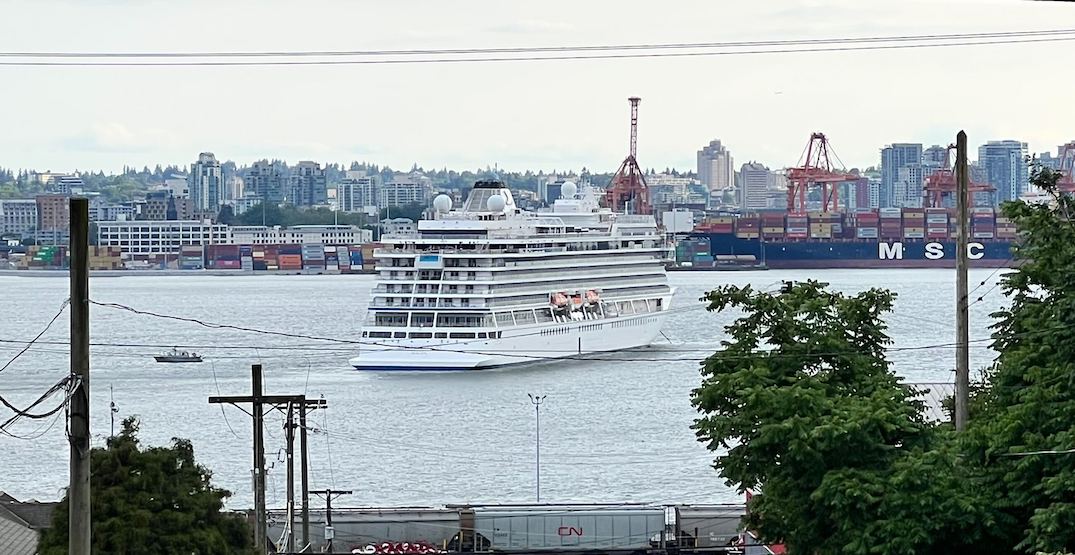 There were some concerns on social media over the weekend that an evacuation was being conducted from a cruise ship anchored in the middle of Vancouver harbour, but that was anything but the case.

Small boats were spotted going back and forth between the Viking Orion and downtown Vancouver. This is in fact a standard optional procedure for cruise ships for their operations of loading and disembarking passengers, especially when a berth at the port is not available — and not just in Vancouver, but around the world.

Think of it just like a bus gate for an airport, where passengers are bussed between the plane on the tarmac and the airport terminal building.

That was the case for the Canada Place cruise ship terminal on Sunday, which saw all three of its berths fully occupied by three large ships — the Noordam, the Serenade of the Seas, and the Celebrity Eclipse. The Viking Orion was the fourth cruise ship to call in Vancouver that day.

“During high season, we will occasionally see more than three cruise ships opting to call Vancouver on the same day. Usually, those extra ships will anchor during the day and move to berth later when those ships at berth depart,” the Vancouver Fraser Port Authority told Daily Hive Urbanized in an email.

“As per our regular protocols at Canada Place cruise terminal, when cruise berths are at capacity, additional cruise ships can anchor and some cruise ship operators may decide to disembark passengers and transport them to shore by small boats.”

The port adds that in such scenarios, it works with the cruise ship operator and Canada Border ServicesAgency to accommodate the disembarking passengers through the port authority’s Harbour Master south float, just east of Canada Place.

This operations scenario is rarely activated, but the port adds there may be more instances this summer where passengers will be disembarked from where a cruise ship is anchored in the middle of the harbour.

This cruise ship season in Vancouver, the first in two years, is slated to be an exceptionally busy one. Over 300 cruise ship calls are expected between April and early November of this year — up by 8% compared to 2019’s record year for Canada Place’s cruise ship volumes. At least one cruise ship is scheduled to call at Canada Place almost daily between early May and early October.

Businesses in downtown Vancouver have been experiencing a major boost from the return of cruise ship passengers and other tourists.