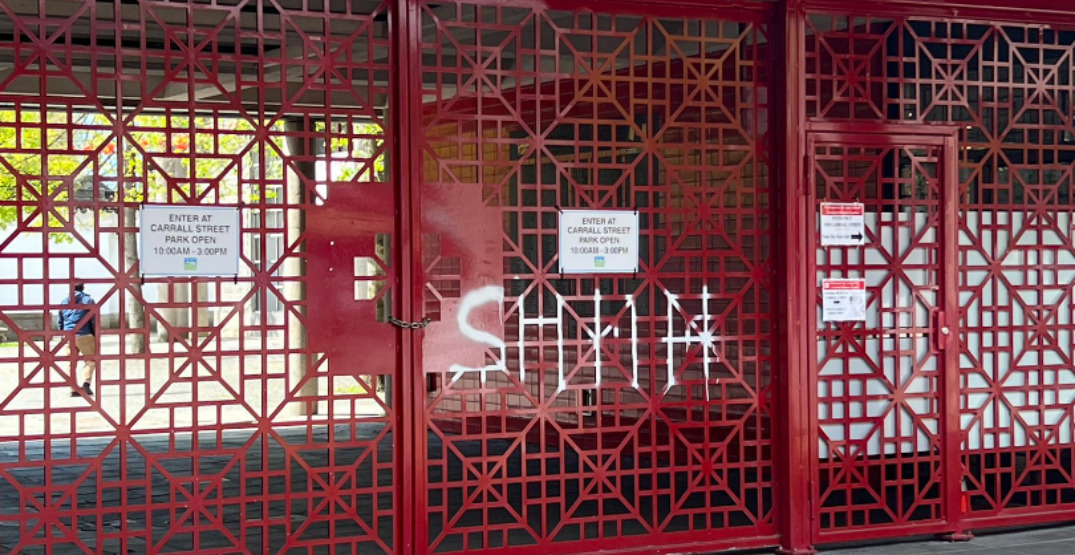 Another part of Vancouver Chinatown has been defaced, an ongoing issue for business owners and organizations in the community.

On this occasion, the spray-painted message on the red gate that leads into the Dr. Sun Yat-Sen Classical Chinese Garden and Chinese cultural centre feels personal.

The message is simple; it says, “Shhh.”

The community in Vancouver Chinatown has been vocal about previous instances of vandalism and graffiti. There hasn’t been much done in response according to the community, which has sparked a conversation on social media about a lack of action from the City.

for asking for safety & peace in #chinatownyvr we get – msg right at our door to “SHHH” & large poster to not cry – targeted harassment & intimidation in city of Vancouver – no one is doing anything about it pic.twitter.com/rR7sVjxr4u

Lorraine Lowe is the executive director of the garden. She told Daily Hive Urbanized that the gate is owned by the Vancouver Park Board and that police are investigating the incident.

So grateful for strong supportive SENSIBLE voices in our cmty who genuinely care for all people & taking REAL ACTION in bridging communities. Thank you @thenetworkhub for standing with us. We will not SHHH #vanpoli https://t.co/KT84vlQA1e

Some users on social media are connecting it to a poster around the block that was also put up a few weeks ago. It reads, “Don’t cry for the broken windows and feces, cry for the people killed by the VPD.”

Some accusations have also been thrown around on social media, including one tweet that alleges that a group related to the Pivot Legal Society may have been responsible.

Please consider investigating/reporting on the role of Pivot legal in the messaging motivating this sort of thing. Their partner group (run by Pivot staff) bragged about their graffiti right across the street which mocked the garden’s posts on vandalism. They incite this pic.twitter.com/hOl1mIIE41

Daily Hive Urbanized reached out to defund604network about the graffiti and received a response.

“No member of our Network is involved in the ‘shh’ graffiti you are referring to. We take full and enthusiastic credit for the paste-up at the boarded windows of Peking Lounge.”

The Vancouver Park Board told Daily Hive Urbanized that it would be in touch as soon as they receive more information about the latest act of vandalism to impact Vancouver Chinatown.