New low-rise and mid-rise buildings in Vancouver’s Chinatown district will no longer be able to achieve taller heights, reversing a policy first approved in 2011 that was intended to help revitalize the area.

Earlier this afternoon, Vancouver City Council approved policy changes that restrict the height and size of buildings in Chinatown in response to calls from anti-development activists to preserve the heritage nature of the area and limit site assemblies and property speculation.

“These changes are the result of many years of working with the community to address the concerns we have heard about how recent new development has been out of character and has been impacting Chinatown’s culture and heritage,” said Gil Kelley, the City’s General Manager of Planning, Urban Design and Sustainability, in a statement.

“Chinatown is a National Historic Site of Canada and an important part of Vancouver’s cultural identity. Current planning and revitalization need to respect the unique heritage and diversity of the community. These changes are part of a broader suite of revitalization strategies soon to get underway.”

The new zoning policies for development in the area are as follows: 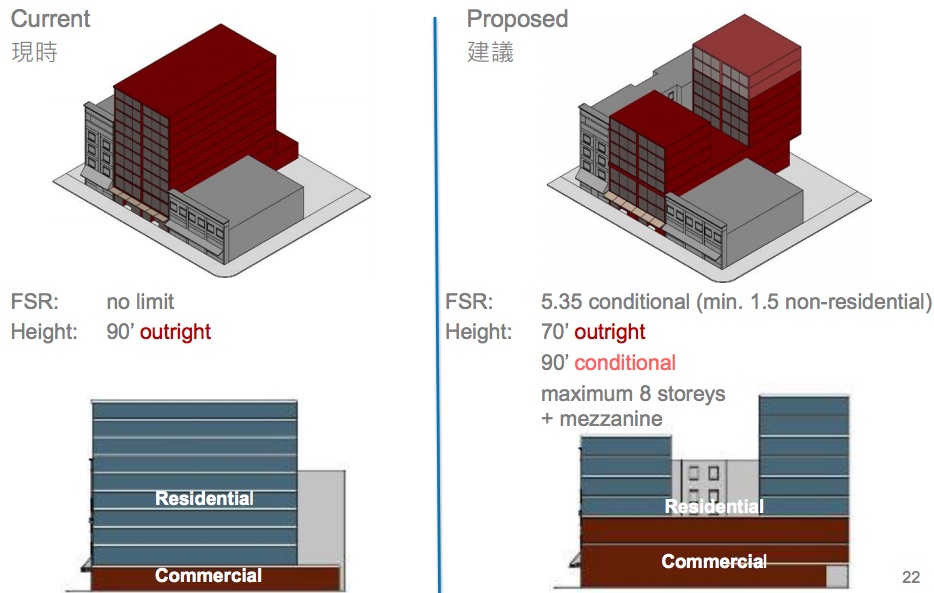 While he supports the spirit of protecting heritage aspects of Chinatown, Bremner said he is concerned about the unintended consequences of restricting more people from moving into the area, which would support existing and new businesses.

“I feel we may be suffocating this community in some way, and we may put at risk its long-term resiliency,” he said.

“The resiliency that is its history, this wonderful place where people and businesses are able to thrive. I am concerned about some of the restrictions that are placed in here and I do think it can harm the long-term viability.”

Anne McMullin, the President and CEO of the Urban Development Institute, added: “We believe the previous Chinatown area plan, approved in 2011, struck a positive balance between heritage preservation and the need for revitalization to accommodate population growth and support local merchants. At a critical time in our region’s housing crisis, we need to be trying to accommodate more housing options, not even less than were previously approved.”

City planners indicated they wanted to reverse some of the 2011 policies following the elongated debate over Beedie Development’s 105 Keefer Street proposal to build a modestly-sized, mixed-use building on a vacant parking lot site. That proposal was subsequently rejected by the Development Permit Board.

However, the City will still consider the 150-ft-tall, 15-storey rezoning application for site of The Brickhouse at 728-796 Main Street under the 2011 policies as the proposal, submitted in May 2017, is midstream in the review process.

In addition to the rezoning changes, the municipal government is seeking a UNESCO World Heritage Site designation for Chinatown as one of the mechanisms to “preserve” the district.