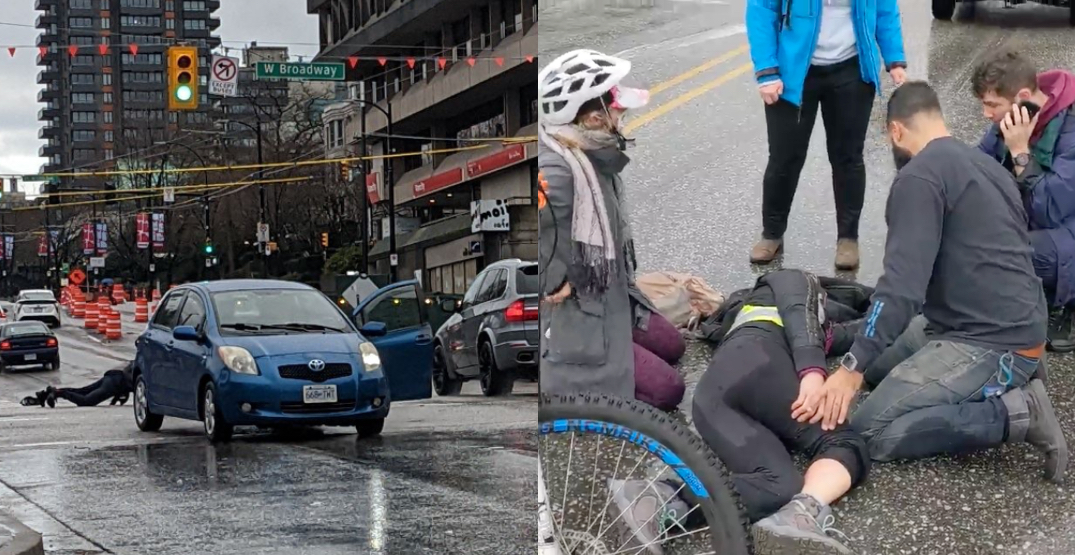 A violent carjacking incident reportedly happened on Sunday, February 27 at one of the city’s biggest intersections.

VPD confirmed with Daily Hive that just before 8:30 am, the victim of the incident was stopped for a red light at Cambie and Broadway when a man entered her car through the passenger side. He attempted to drag her out of the car.

A witness saw what was happening and came to help the victim, getting assaulted by the man.

“The victim was then dragged out of the vehicle by the suspect and left in the middle of the road while the suspect drove off in the victim’s car,” Constable Tania Vistin told Daily Hive.

VPD said the suspect was found, arrested, and now charges have been recommended.

Leo Poon, who shared photos and images of the incident to social media, reached Daily Hive to share more information about the carjacking.

According to Poon, a white male in his 40s forced an Asian woman in her 50s out of her vehicle, which was facing northbound during a red light.

A passerby witnessing the incident reportedly interfered, trying to pull the suspect off of the car. The suspect pushed the man away and drove away from the scene northbound in the vehicle.

“I was half a block away, heard woman screaming, car honking,” Poon told Daily Hive. “I thought it was a hit and run until I got close.”

In subsequent Facebook comments, Poon said he stayed at the scene to help facilitate translating and assist in making a police report. Then, Poon reported that police informed him that the carjacker was caught and was in custody.

By the same intersection, three weeks prior, a man was threatened with a meat cleaver at the A&W on Broadway in the afternoon.

Cambie and Broadway is a five-minute walk from the Vancouver Police Department located on Cambie Street by West 2nd Avenue.