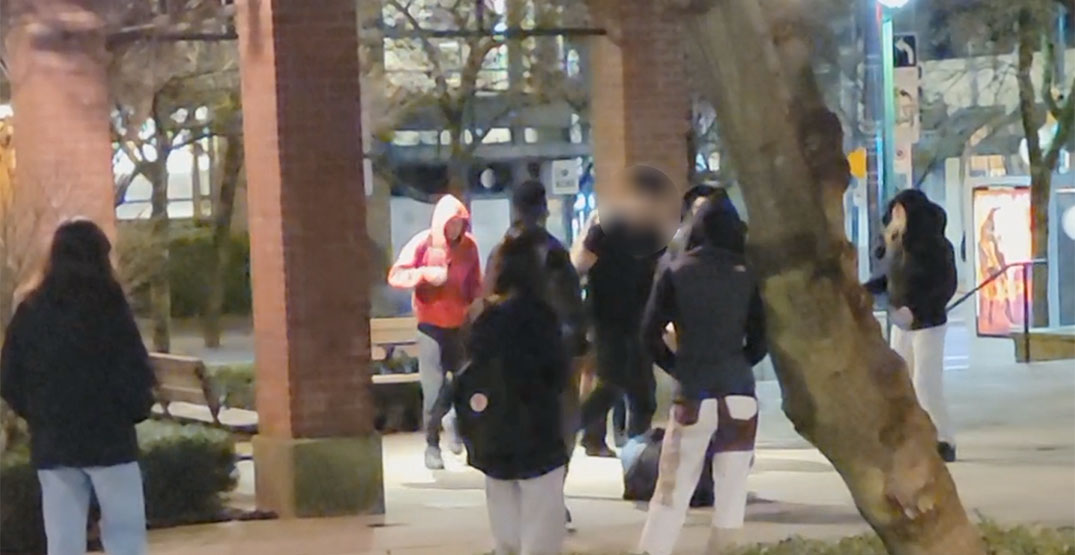 Vancouver police released a video today of a group of people beating up a man in Yaletown, and said they’re still searching for one suspect.

The incident occurred around 11:30 pm on February 20 at Emery Barnes Park and was filmed by a bystander who was several metres away.

The video shows a group of people standing over a man who is lying on the ground, and two members of the group punch and kick him while others film. At one point, the victim goes limp after being struck.

“While this video is troubling to watch, we have had considerable success in identifying suspects in stranger attacks, and we hope that by releasing this video someone will come forward with information that can help us identify the people responsible,” Const. Tania Visintin said in a news release.

The bystander who filmed the assault flagged down a nearby police officer, but by the time officers got to the scene the victim and the assailants had left.

They tracked down one 19-year-old suspect from Richmond nearby on Granville Street, but are still searching for the second suspect. The 19-year-old was released from custody while police continue to investigate.

The victim was a 44-year-old man from Vancouver, and someone called 911 on his behalf after he returned home. The man had severe facial injuries and needed hospital care.

Police are asking for the public’s assistance to identify the remaining suspect. Police describe him as a twenty-something about 5’9″ and weighing approximately 160 pounds. He was wearing a red hoodie, black pants, and was carrying a black satchel.

Do you recognize the man in the red sweatshirt? This is the best video we’ve got. #VPD officers want to identify him in connection with a violent swarming in Yaletown last weekend. Any info to 604-717-2541. https://t.co/s0V3epGonX pic.twitter.com/T4EjXmvZIa

“This park is surrounded by high-rise towers and it’s part of a heavily populated area,” Visintin said. “There must be people who either saw this swarming, were there when it happened, or recognize the people in the video. We’re asking those people to do the right thing and come forward.”