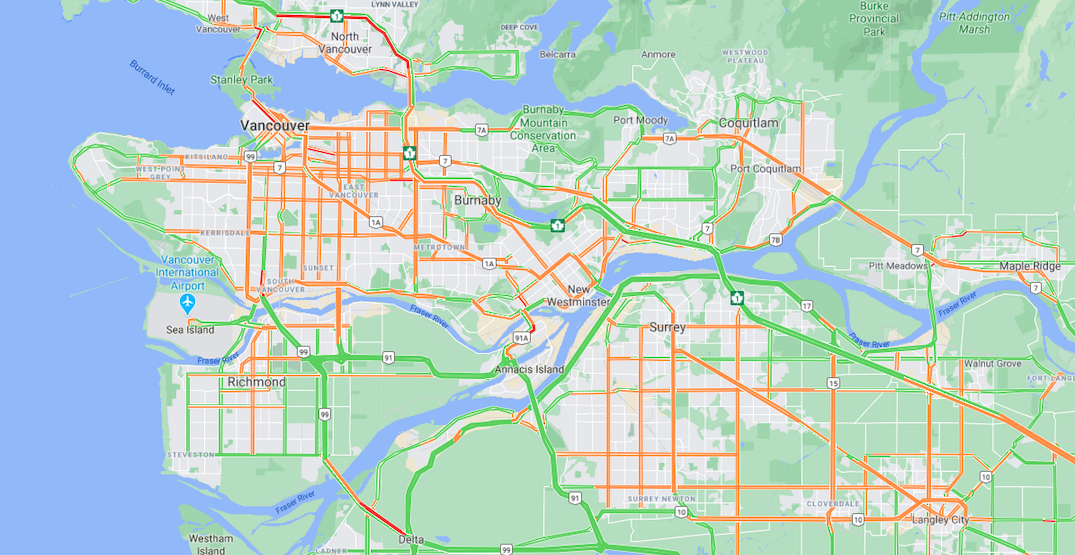 Vehicle volumes on major arterial roadways in Metro Vancouver are not only on the upswing, but they are now nearing pre-COVID-19 normal levels.

Statistics provided by TransLink to Daily Hive Urbanized shows vehicle volumes on three major regional bridges have largely rebounded from the pandemic low in March and April, when there were widespread business shutdowns and layoffs, and many residents stayed home.

The rebound first began in May when the provincial government initiated the multi-phase restart of BC’s economy.

TransLink says the lowest day for traffic volumes was March 27, and ever since weekday volumes on all three bridges has been growing at an average rate of 0.34% per weekday. The public transit authority operates and maintains these bridges, while other major regional bridges — not including the three False Creek crossings — are the responsibility of the provincial government.

While road traffic volumes have normalized, there is still a long way to go for public transit ridership to return to pre-pandemic levels. After experiencing strong growth in May, June, and July, the pace of ridership growth appears to have slowed down, with TransLink indicating systemwide boardings are now at 44% of normal levels — up from 40% at the end of July, and approximately 15% in early April.

Another visible bump in road traffic volumes and transit ridership could be experienced starting next week, when more employees return to work and the new school semester begins.

It remains to be seen whether the rising number of COVID-19 cases could have a dampening effect.