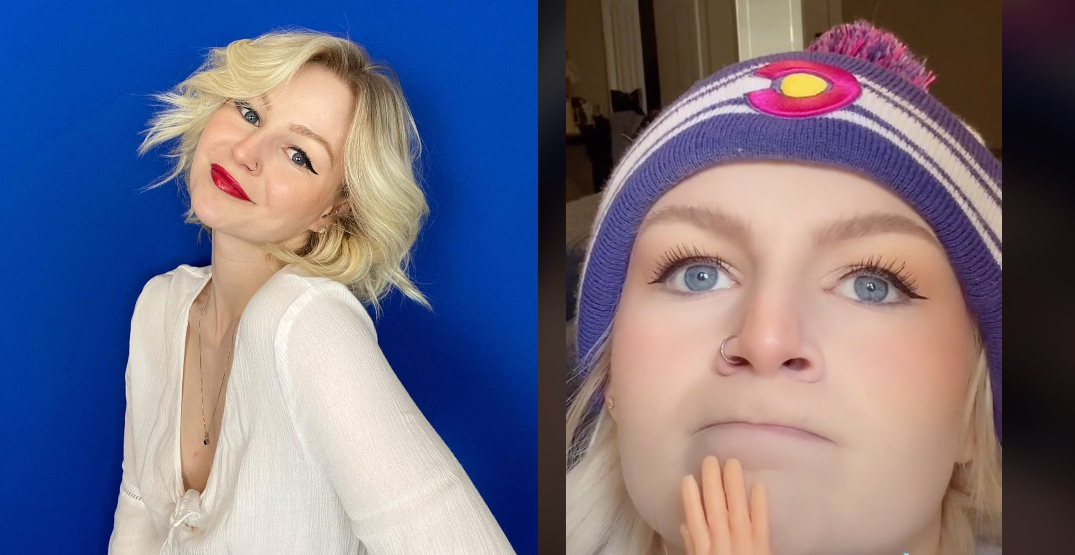 You’ve probably seen Kris while scrolling through your For You Page, but did you know she’s a local Metro Vancouver TikTok star?

According to HypeAuditor, Kris Collins, aka @kallmekris, is Canada’s second-biggest TikTok influencer. She posts comedic sketch TikToks and more for her 37 million followers every day, including riotously funny sibling and family dynamic sketches that are way too relatable.

Daily Hive sat down with Kris to chat about her journey from hairdresser to globally recognized TikTok talent.

Are you millennial or Gen Z?

I’m on the cusp. I think I fit in a little bit more with millennials than Gen Z.

Where do you go in Vancouver to feel like the main character?

Walking along the seawall in a cute outfit? That always makes me really feel like the main character.

What are you going to dress up as for Halloween?

I was going to go pick up a ridiculous amount of costumes and use them for TikTok and YouTube because a lot of people have been asking for certain costumes, whether it’s Cruella or Harley Quinn, so I’m just gonna play dress up like I do every day and have fun with that.

I keep when I post really consistent. I feel like my audience knows I post at a certain time, within a half hour, every single day. It’s almost like a showtime! I’ve stuck to 11 am PST for almost a year and it seems to work for me.

I’m from Abbotsford, BC, and before all this, I was a hairdresser. When COVID-19 hit, I had to close my doors. And then I just started making videos for fun and then it just escalated into all of this, which is so crazy.

My whole job revolves around me coming up with ideas constantly, but I like to keep it like a regular workday as much as I can. So usually, the night before, I’ll write a script or have at least some sort of plan for the video or TikTok the next day.

In the morning, I’ll spend a couple hours making and editing the video editing the video. And then it’s kind of like a rinse and repeat for TikTok and YouTube. I usually stream at night or I’ll be working on my show that I’m writing or on merch I’m designing.

It’s a million little things throughout the day, and it ends up being an 8- to 12-hour day, depending on the day.

Where do you see yourself going forward?

I always wanted to try to get into acting and writing, so [TikTok] kind of opened a lot of different doors for me. I’ve been approached by production companies and casting directors, so now I’m trying to break into the TV/movie space, possibly. And I’m trying to write my own show.

I feel like this is maybe a stepping stone for me into something else, but for right now, it’s wonderful. And I love doing TikTok and YouTube. It’s nice to just be able to do what I want to.

I think it’s a great platform because it’s one of the few platforms where you can actually have community and you can be so social and interact with videos, whether it’s dueting or stitching. You can respond to a comment with a video, so I really like that I can talk to my community so much.

With TikTok, anybody can blow up on it too, which is really cool because of the algorithm. Because it’s such a short format, and people’s attention spans, including my own, are so short, I think that’s why people gravitate to it so much.

Where do you think TikTok is headed?

I have built this weird TikTok show, and I know a lot of people in TikTok and they’re kind of talking about how it’s almost going to become maybe like the new TV. They’re actually going to start doing scripted show content because it’s like a three-minute video.

What’s your advice for people who love TikTok but have been too shy to post their own videos?

For me, I’ve always had the “I don’t care what people think” attitude. I just post what I like, and it’s a bonus that other people like it.

Don’t be too hard on yourself or anything at first. I posted I don’t know how many videos before I started to get one view.

And then if you have a passion to do something, I think it’s a great platform to start on and it shouldn’t be intimidating because who cares if you don’t get any views on your first video or whatever. It’s hard to tell people just not to care – but you really just don’t need to care. You’re your own worst enemy. I know, I am.

A lot of your posts are about your siblings and family. Are they a big inspiration for you?

They are a huge inspiration because I grew up with five siblings. So I grew up in a very hectic household with lots of memories, some good some, not so good, some entertaining.

And I found that when I started to make original skits, a lot of people related to that. I have lots and lots of material from my family. Let’s just say that! My sketches are all based off of stuff that’s actually happened.

Are you surprised at which videos go viral or do you feel like you know by now what’s going to work?

I somewhat know what’s going to work but the TikTik algorithm is so crazy sometimes.

It’s always the videos that I spend the most time on usually don’t do as good as the ones that I don’t even think about and I film it and edit it in an hour.

What’s been the recipe for your success?

I know that a certain character always gets at least a certain amount of attention because that’s the favourite.

I’ll still go between all of my other characters, or try new stuff. Just because I know I would just get burnt out doing the same thing over and over again. So I think that’s kind of helped with my growth and not getting burnt out. I’m just constantly adding new stuff in even though people like certain things.

I think that it’s really important for creators is to just keep doing new stuff even though it might not do good at first. You just make people get used to stuff. I just push stuff on people. I’m just stubborn.