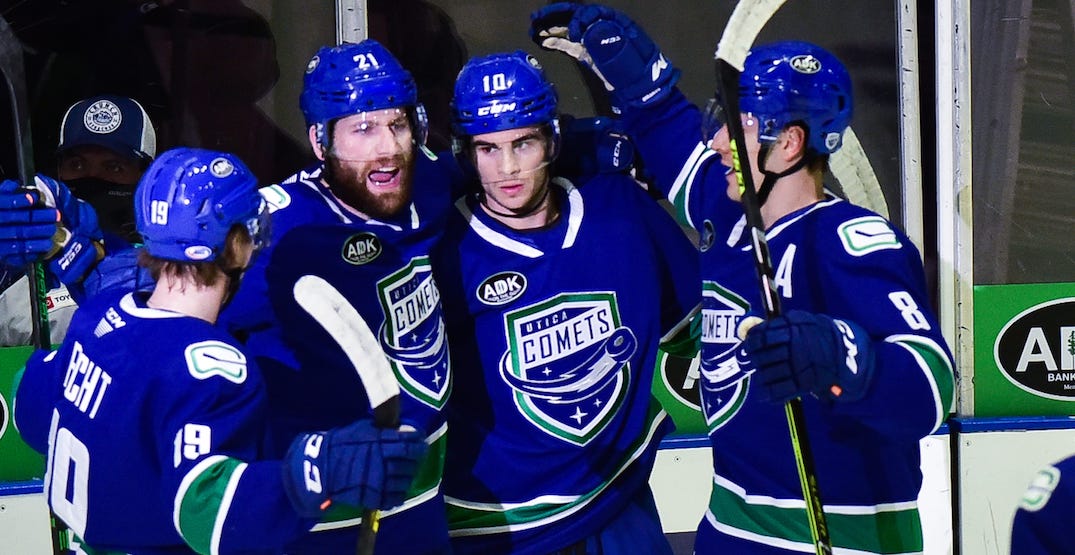 COVID-19 appears to have struck the Vancouver Canucks’ farm team in Utica.

The AHL has announced that the Utica Comets game scheduled for tomorrow against the Rochester Americans has been postponed, and a make-up date has not yet been determined.

This Friday's home game has been postponed, a makeup date has not yet been determined. See https://t.co/C8s5sbzT1I for more details pic.twitter.com/UXoYm8g89H

The reason for the postponement, according to an AHL media release, is “due to league COVID-19 protocols affecting the Utica Comets.”

Similar to NHL rules during the pandemic, AHL players, coaches, and staff can be put into protocol for multiple reasons, including if they have tested positive or if they are deemed a close contact to someone who has contracted COVID-19. That was the case earlier this season with the Canucks, when Jordie Benn tested positive for COVID-19 and J.T. Miller was deemed a “high-risk close contact.” Both players were forced to miss multiple games, and the Canucks cancelled practice for one day.

Just how many Comets players may have tested positive is unknown at this point.

The pandemic has thrown a wrench into operations for the Canucks this season in many ways, and that includes how they interact with their AHL affiliate. Any player called up from Utica this season is subject to a 14-day quarantine upon entry into Canada.

For that reason, the Canucks have loaned some players to Winnipeg and Montreal’s affiliates in Manitoba and Laval, in addition to keeping players like goaltender Michael DiPietro on the taxi squad. DiPietro hasn’t played a competitive game in more than a calendar year, while defenceman Brogan Rafferty has appeared in just one, before being loaned to Manitoba from the taxi squad yesterday.

The Comets, meanwhile, are being shared this season by the Canucks and St. Louis Blues. Still, a number of Canucks prospects are in Utica at the moment, including Jack Rathbone, Kole Lind, Jonah Gadjovich, Lukas Jasek, William Lockwood, Carson Focht, and Jett Woo. Veteran Sven Baertschi, is also spending the season with the Comets.