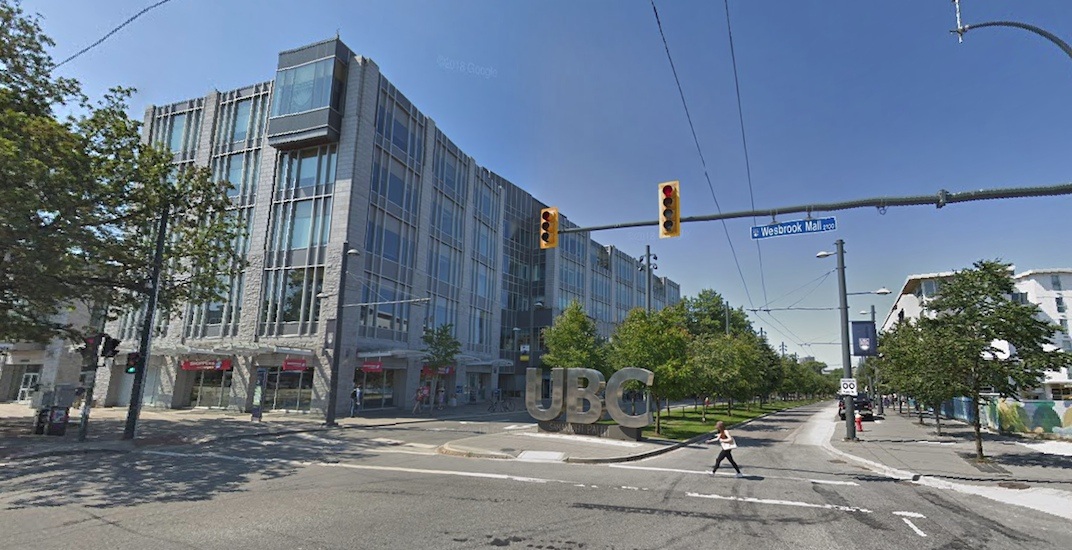 It’s a near certainty that if SkyTrain were to be extended all the way to the University of British Columbia, the section between Arbutus Street and Alma Street will be tunnelled under West Broadway.

There will be subway stations at Macdonald Street and Alma Street to serve the immediate areas and provide bus connections.

But west of Alma Street within Point Grey, the University Endowment Lands (UEL), and UBC, the route is far from certain and obvious at this early stage of planning.

According to the findings of the new detailed technical analysis released by TransLink earlier this week, rapid transit west of Arbutus Street to UBC needs to be SkyTrain to ensure the system is built with future-proof capacity. The final decision on rail technology lies with the Mayors’ Council.

However, if SkyTrain is chosen, the report reveals there are several route and built form options SkyTrain could take from Alma Street to the ultimate terminus at UBC’s Point Grey campus.

“The SkyTrain extension would be the one technology that would provide sufficient long-term capacity to meet the needs,” said Geoff Cross, the Vice-President of Planning and Policy for TransLink, during today’s Mayors’ Council meeting.

The main questions are now: “How much of it is elevated versus tunnelled and what key land uses do you need to hit? Where are the stations located? What would the exact corridor be?”

Here is a rundown of the options:

Future land use plans for the 90-acre Jericho Lands — the massive undeveloped property framed by West 4th Avenue to the north, Highbury Street to the east, West 8th Avenue to the south, and Trimble Park and Queen Mary School to the west — could steer the subway route to West 8th Avenue instead of the long-assumed path along West 10th Avenue beyond Alma Street, with a station at Sasamat Street.

The Jericho Lands’ property owners — a consortium comprised of First Nations and Canada Lands Company — intend to redevelop the former military base with significant density.

Between 2014 and 2016, the consortium paid a staggering $717 million for the property, so there is no question they will be pushing for a hefty return.

Amongst real estate circles, it is assumed that the residential developments in this large parcel could provide housing for tens of thousands of people, with a building form and scale that can be compared to the Olympic Village. There could also be a commercial village close to the site’s northeast corner.

The potential scale of the redevelopment could make a subway station that directly serves the Jericho Lands an attractive option to consider.

“If the future tunnel alignment follows 8th Avenue to capture the Jericho Lands property, then an alternate route along 8th Avenue to University Boulevard would be considered.”

Last summer, Vancouver city council approved the Jericho Lands Policy Planning Program, which will create the master plan to guide the site’s future rezoning. This master plan planning program is expected to reach the public consultation phase before the end of 2019, and the first draft of what the redevelopment could look like should be ready by early-2020.

But land use and transportation are symbiotic; the proximity to a subway station will have a great influence on the redevelopment’s permissible density.

During today’s Mayors’ Council meeting, Vancouver Mayor Kennedy Stewart stated the First Nations that own the property have shown excitement for the extension to UBC and SkyTrain technology, and they suggested offering the land required for a station on their site.

Most early concepts for the SkyTrain extension to UBC have assumed the continuation of tunnelling west of Blanca Street, within the University Endowment Lands, along University Boulevard.

But the report explores the potential feasibility of building an elevated guideway on the median of University Boulevard to cut down on construction costs. This concept would remain elevated to the terminus station at the campus.

A tunnel portal — the transition from underground to elevated — could be built 180 metres west of Blanca Street. From this point just east of the University Golf Course entrance, the rail line would run on ground level for 700 metres in order to transition to 1.9 km of elevated guideway for the remaining journey to the UBC terminus. 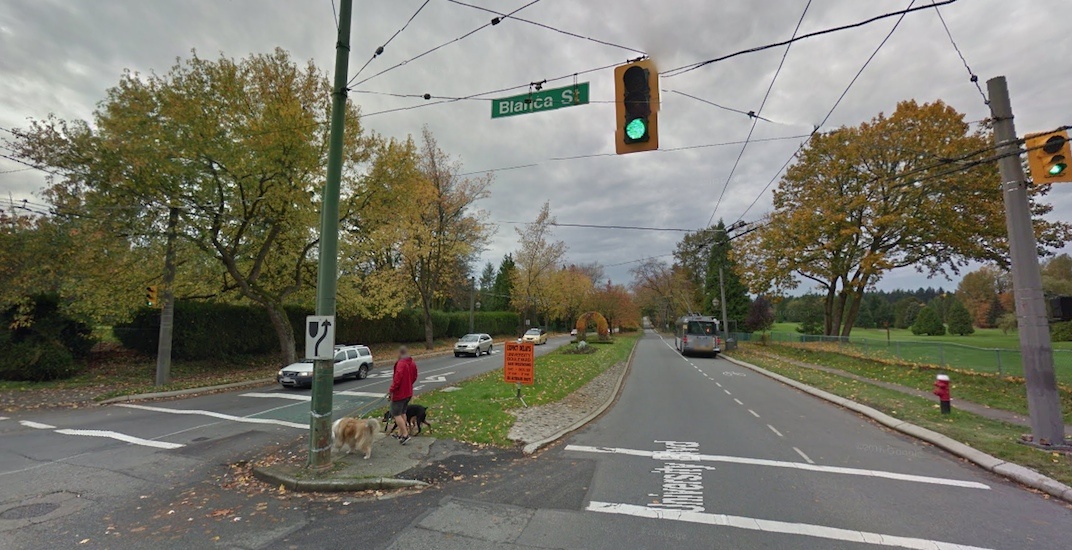 It is estimated that running SkyTrain elevated in this way would result in $190 million in cost reductions compared to tunnelled in 2018 dollars; a completely tunnelled extension from Arbutus Street to UBC is estimated at $2.36 billion, while the partially elevated option is pegged at $2.19 billion (not including the 40% to 60% project contingency fund).

This accounts for the difference in cost for an elevated or underground UBC station. Underground stations for the project are estimated at around $100 million each, while elevated stations are half the cost each.

“Considering the density of urban development and high property costs, having a tunnel portal east of Blanca Street would be very difficult to achieve primarily because of the physical requirements for the tunnel portal,” reads the report.

“Further, the significant grade along 10th Avenue between Alma Street and Blanca Street lends itself to a natural tunnel alignment with a portal just west of Blanca Street which allows the alignment to travel at-grade through a portion of Pacific Spirit Regional Park, saving additional costs.” 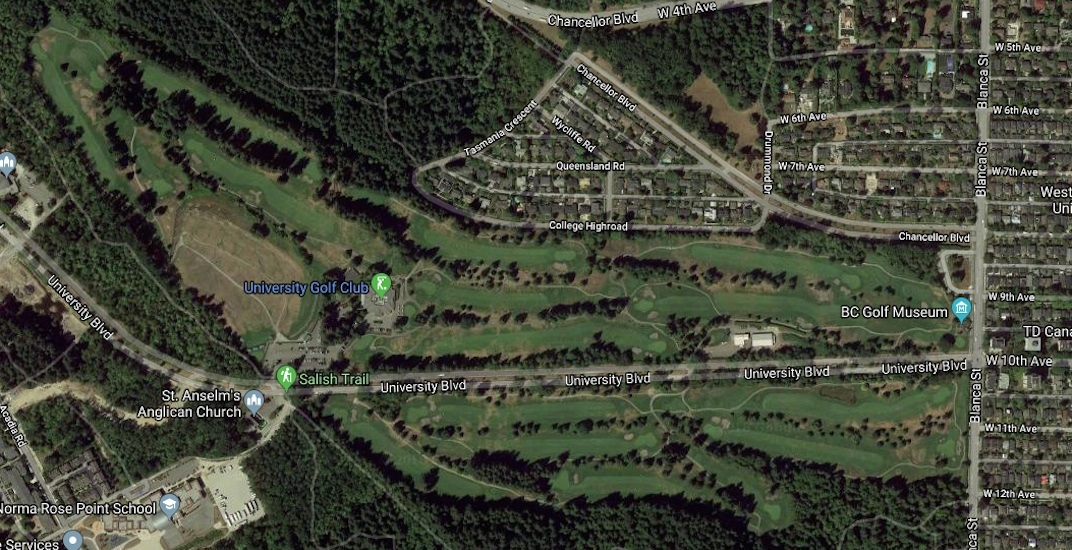 Aerial of University Golf Course at UBC, with University Boulevard cutting through the course. (Google Maps)

Although the analysis did not examine in detail, it identified two potential future station locations before reaching the academic campus along University Boulevard. Both future stations would serve future redevelopments adjacent to their location.

One future station on University Boulevard could serve the future University Golf Course Lands. Under the 2008 treaty, the Musqueam First Nation can redevelop its 146-acre golf course property after 2083, when a clause on the site’s required usage as a golf course ends.

“The proposed alignment identified in the 2012 study traverses the golf course,” the report notes. “However, much of the golf course is outside of the walk-up catchment for station locations proposed as part of that study. Provision for a future station within the golf course lands should be considered to enable longer-term redevelopment.”

A second future station was previously assumed adjacent to the site on University Boulevard east of Toronto Road, but it was not included in this analysis’ evaluation. Such a station location would serve the Musqueam’s Lelem ‘Block F’ development of 2,500 residents, a community centre, and 30,000-sq-ft of commercial space within a 21-acre site.

Furthermore, the provincial government recently launched a process of exploring additional density in the existing UEL neighbourhood framed by Westbrook Mall to the west, University Boulevard to the north and east, and Agronomy Road and Toronto Road to the south. This is just next to Lelem. 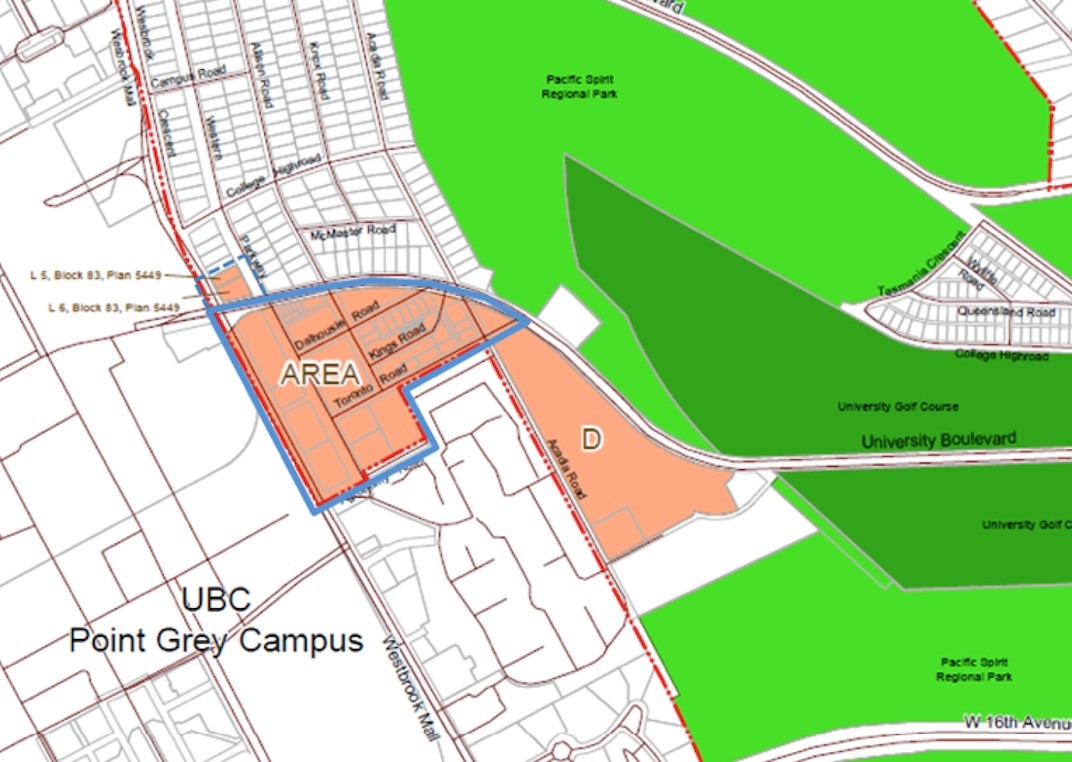 The location of Area D at the University Endowment Lands. (Government of BC)

UBC terminus station needs to be a juggernaut machine

By 2045, the UBC terminus station near the intersection of University Boulevard and East Mall is projected to be the busiest station in terms of alightings today, with this single station seeing about 10,000 passengers alighting in the morning peak hour. 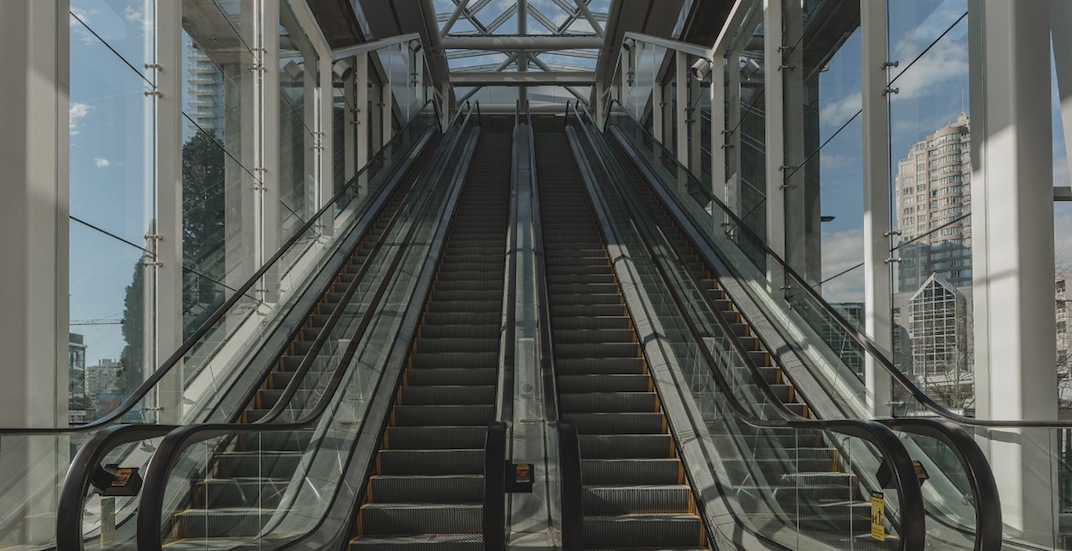 This translates to 24 trains arriving at the UBC station every hour, based on frequencies of every 2.5 minutes. Each arriving train in the 2045 morning peak hour will be filled to capacity, with about 410 passengers pouring out of the train. This provides passengers with 150 seconds to disembark the train and clear the station platform before the next train arrives with another 410 passengers to process.

A station can certainly be designed to handle these volumes, with capacity features such as at least seven fare gates, four escalators that are reversible for peak flows, and possibly all-door boarding and alighting with the usage of multiple platforms — just like the new platform recently completed for Commercial-Broadway Station’s inbound direction. 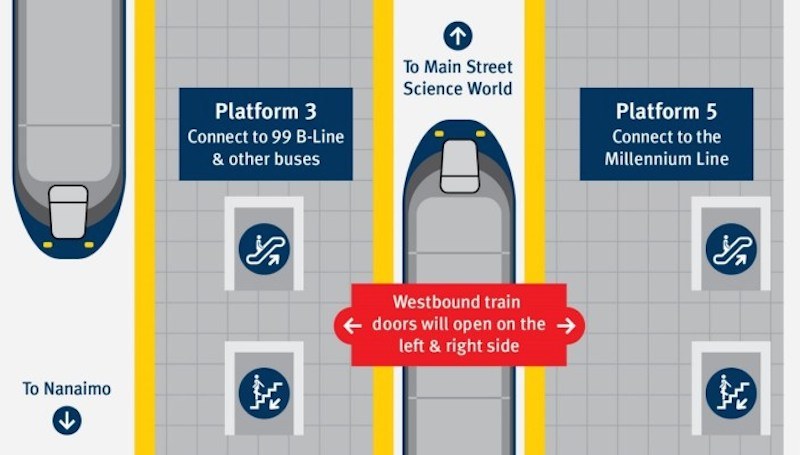 All-door boarding for the inbound direction on the Expo Line at Commercial-Broadway Station with the new additional fifth platform. (TransLink)

Reaching Wesbrook Village with an elevated guideway along East Mall

A second station — the possible ultimate western terminus for the Millennium Line — near UBC’s south campus’ Wesbrook Village could help lessen the volumes of the aforementioned central UBC station in the core of the academic campus. It would also serve the immense future growth planned for the south campus area.

UBC first revealed the idea of bringing the extension to Wesbrook Village in its advocacy last year.

The analysis briefly examines the routing of this concept by extending the more affordable elevated guideway option that begins just west of Blanca Street. From the UBC central station at University Boulevard just east of East Mall, the elevated guideway would turn south onto east mall by running through the existing Wesbrook Building, which is ageing and slated for future redevelopment.

UBC Wesbrook Building at the southeast corner of the intersection of East Mall and University Boulevard. (Google Maps)

The Wesbrook Building is at the southeast corner of the intersection of University Boulevard and East Mall. By using the building’s site, trains could run at “a higher speed through this segment and would also help to minimize noise and vibration effects,” reads the report.

Travelling south on the East Mall, the guideway would run on the east side of this local street, which is narrow with just two lanes and bordered by buildings for the first 600 metres between University Boulevard and Thunderbird Boulevard.

The second station would be located in the area just north of the intersection of East Mall and West 16th Avenue, just north of Wesbrook Village. 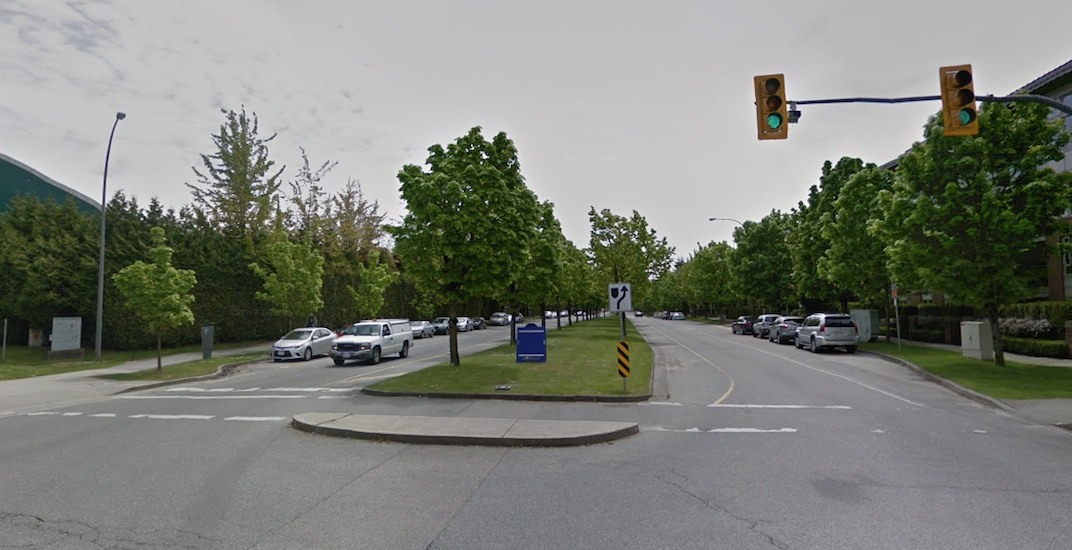 The median on East Mall that runs between Thunderbird Boulevard and 16th Avenue. (Google Maps)

“This [East Mall] corridor is constrained but with innovation, could be manageable to provide for a future potential second station,” the report adds.

There is significant population growth in the area of the south campus, which includes further development over the next five years within the 110-acre Wesbrook Village to push the newly-created district’s population to 12,000 residents.

Thousands of additional residents could be packed into the new 22-acre Stadium Neighbourhood planned northwest of the intersection of East Mall and West 16th Avenue, which includes redeveloping the site of Thunderbird Stadium and building a replacement 5,000-seat stadium with a smaller footprint.

A future station in this area could also see ridership from sports and events and concerts held at the new outdoor stadium and the nearby 7,500-seat Doug Mitchell Thunderbird Sports Centre, which has held Davis Cup matches, ISU Grand Prix of Figure Skating Final, and increasingly a venue for big-name acts.

UBC has maintained it is willing to provide a significant financial contribution towards helping cover TransLink’s share of the cost of the SkyTrain extension to the campus. 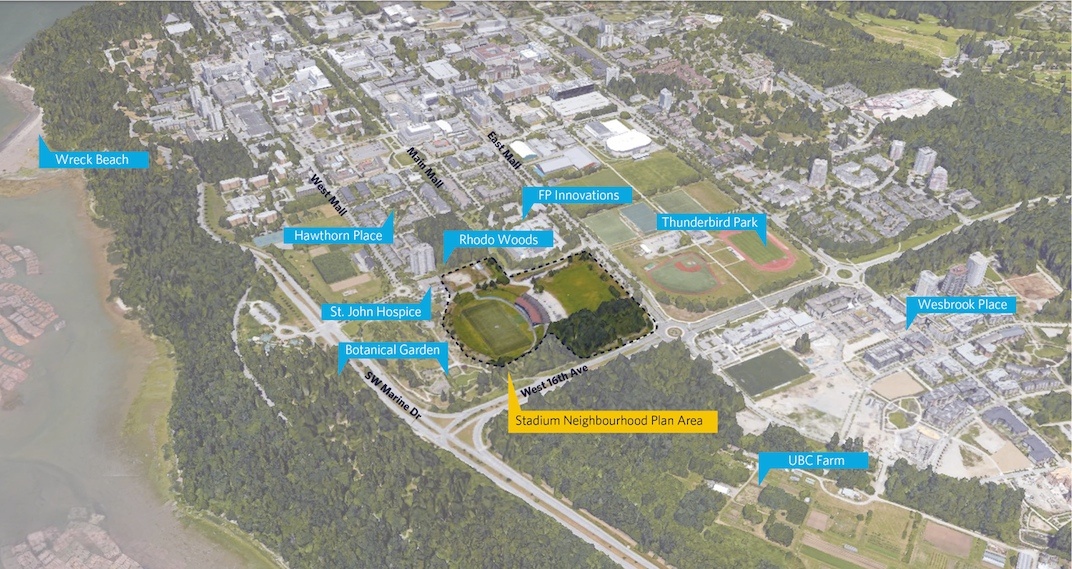