Only a complete SkyTrain extension of the Millennium Line from Arbutus Street to the University of British Columbia’s Point Grey campus will provide the long-term solution demanded for east-west transportation needs on the Broadway Corridor.

A new report by TransLink staff to be presented to the Mayors’ Council during a meeting this Thursday makes it abundantly clear that the underground SkyTrain Broadway Extension west of Arbutus Street needs to be built.

There is no scenario where a street-level light rail transit (LRT) option provides a long-term capacity solution superior to SkyTrain.

Over the coming months, the Mayors’ Council will be asked to make a decision on the rail technology for further study in order to advance planning work towards the creation of a business case.

SkyTrain extension from Arbutus to UBC

It carries a significant long-term capacity of up to 22,100 passengers per hour per direction (pphpd) — about 68% more than the Canada Line’s ultimate future capacity of 15,000 pphpd, in contrast.

Route for a SkyTrain extension from Arbutus Street to UBC. (TransLink)

Subway stations are envisioned for Macdonald Street, Alma Street, Sasamat Street, and UBC near the intersection of University Boulevard and Wesbrook Mall.

UBC also wants a second station at south campus’ Wesbrook Village, making it the western terminus of the Millennium Line, but this is not reflected in TransLink’s concept yet.

The cost of this extension west of Arbutus Street, roughly seven kms in length, is estimated between $3.3 billion and $3.8 billion in 2018 dollars. When adjusted to inflation for a 2030 completion, costs rise to between $4.1 billion and $4.8 billion.

However, it is important to note that all total cost estimates for every technology and route option includes a contingency ranging from 40% to 60% of actual project costs.

The public transit authority also examined a street-level LRT system starting next to Main Street-Science World Station — a line following the railway right-of-way through the Olympic Village and South False Creek, before utilizing a portion of the Arbutus Corridor and turning west onto West Broadway for the remaining journey to UBC. Passengers on SkyTrain can transfer to LRT at the future Arbutus Street subway station.

Route for a street-level LRT from Main Street-Science World Station to UBC, with a transfer connection to Arbutus Street subway station. (TransLink)

But this option will reach its maximum capacity of 6,120 pphpd by 2045 — just 15 years after the expected 2030 opening of the line, and only double the capacity of an optimized 99 B-Line. It provides about a quarter of the capacity of SkyTrain, but similarly high implementation costs with estimates between $2.8 billion and $3.2 billion in 2018.

A variant of this option would be street-level LRT from the SkyTrain terminus at Arbutus Street to UBC. Although it carries a smaller construction cost of $1.7 billion to $2 billion ($2.1 billion to $2.5 billion in 2030), it still faces the exact same capacity restraints as the LRT option from Main Street-Science World Station, with capacity also reached within 15 years.

“The work also provides confidence that other, potentially lower-cost, alternatives have been explored,” reads the report. 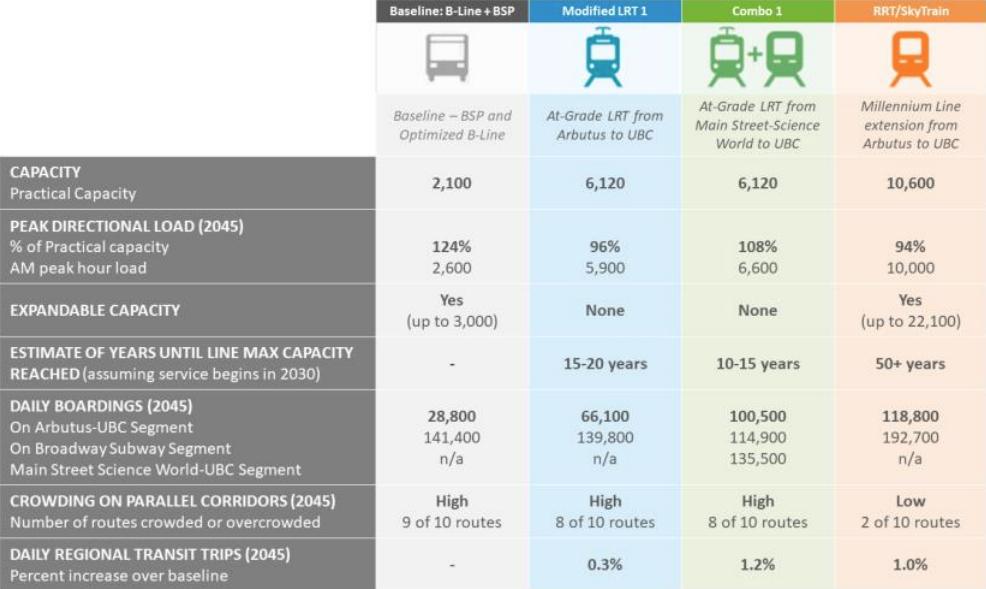 SkyTrain extension compared with street-level LRT and optimized 99 B-Line alternatives. Click on the image for an enlarged version. (TransLink)

But its ultimate capacity will only barely meet ridership demand; by 2045, just 15 years after completion, its projected peak load of 10,400 pphpd will be 85% of the available 12,240 pphpd cumulative capacity of the LRT corridors, leaving very little room to handle long-term ridership growth.

“Compared to the SkyTrain extension, the most extensive LRT network scenarios result in similar ridership to UBC but would likely generate higher ridership systemwide, roughly proportionate to the increase in capital cost,” reads the report.

“However, given that this would represent significantly more kilometers of rapid transit and given the need for a new operations and maintenance centre, two LRT lines would be considerably costlier than a single SkyTrain extension and require substantial supportive corridor and land use changes.”

All LRT options also carry the burden of identifying a suitable site near the transit route that is large enough for an operations and maintenance centre. This is particularly a challenge for a standalone LRT line from Arbutus Street to UBC, given the real estate realities of placing an industrial train yard in Kitsilano, Point Grey, or the University Endowment Lands. 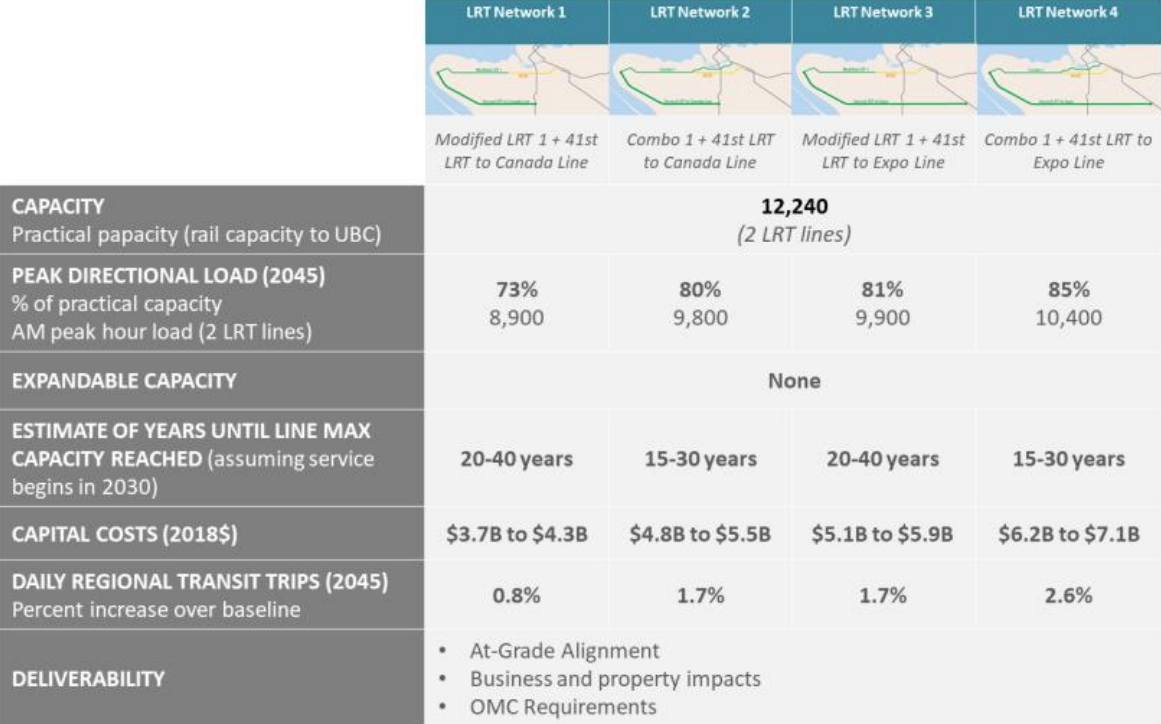 Four street-LRT options as alternatives to SkyTrain to UBC. Click on the image for an enlarged version. (TransLink)

LRT could be designed with more capacity if it were grade-separated, such as elevated or tunnelled, but this would bring it much closer to the costs of SkyTrain.

Under the weighted voting system, the Mayors’ Council is expected to approve the SkyTrain technology option for the UBC extension later this year.

Vancouver Mayor Kennedy Stewart has stated he is advocating for SkyTrain within the regional political body, and City of Vancouver senior planners have previously said SkyTrain is the only option that the municipal government will accept.

UBC’s administration leadership have also made it quite clear that the university wants SkyTrain, with President and Vice-Chancellor Santa Ono asserting that “LRT would be suboptimal.”

“The extreme high volume of users to UBC requires the speed and capacity of an underground or elevated SkyTrain,” said Ono last year.

UBC recently launched an advocacy campaign for a SkyTrain extension and renewed its promise to consider a potential “meaningful” financial contribution towards the project’s costs.

Moving forward, after approval, TransLink will have $3 million available from Phase Two transit expansion funds to conduct pre-business case development work. This work includes preparing detailed concept designs, public consultation, land use planning coordination at UBC and the Jericho Lands, and funding discussions with the levels of government and developers.

But as early as mid-2020, it will require a further $30 million to $40 million to dive into the development of a business case.

This project development is concurrent to planning work being performed on the Fraser Highway SkyTrain extension from King George Station to Langley Centre. In December 2018, the Mayors’ Council gave TransLink staff the green light to proceed with a $30-million, 15-month planning process for the Surrey-Langley Expo Line project that will lead to the creation of a business case sometime in early 2020.

A significant portion of the Expo Line’s extension could be completed by 2025, with the remaining journey to Langley Centre dependent on securing funding for Phase Three of the Mayors’ Council plan. Altogether, the entire 16-km-long, eight-station, elevated SkyTrain extension is expected to cost $2.9 billion, including a $700 million contingency fund.

The $2.8-billion, 5.7-km-long, six-station Broadway Extension up to Arbutus Street is also slated to open in 2025. Construction on this ‘halfway route’ to UBC will begin in 2020.