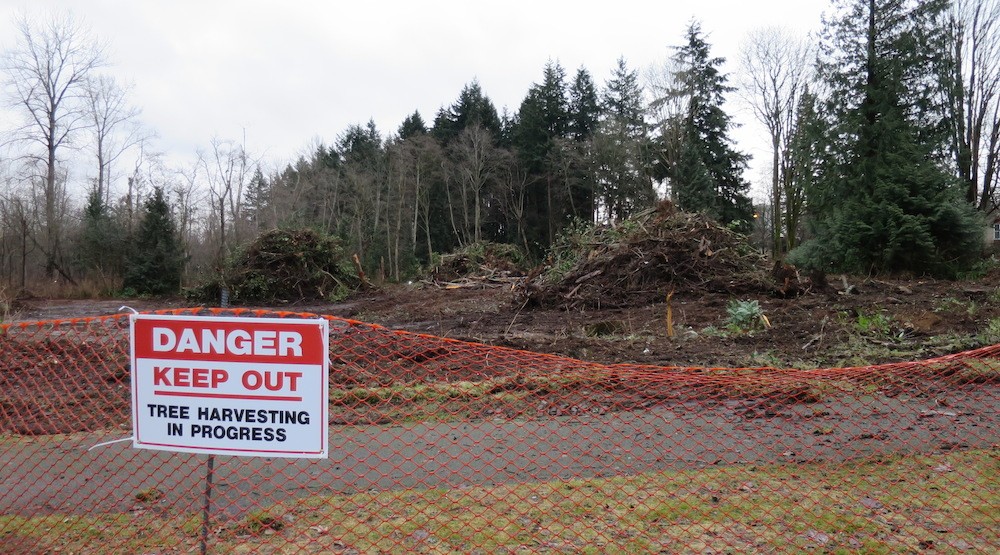 A swath of second and third growth forest in Pacific Spirit Park at the University of British Columbia is being cut down to make way for a new major residential neighbourhood.

Contractors for the Musqueam Indian Band began clearing Block F, a 21.4-acre treed area of the park, last week as part of the pre-construction process.

The site is framed by University Boulevard and Toronto Road to the north, Acadia Road to the west, and Ortona Avenue and Norma Rose Point Elementary School to the south.

For comparison’s sake, the site is larger than the footprint of PlayLand at Hastings Park and roughly 15% the size of Queen Elizabeth Park. 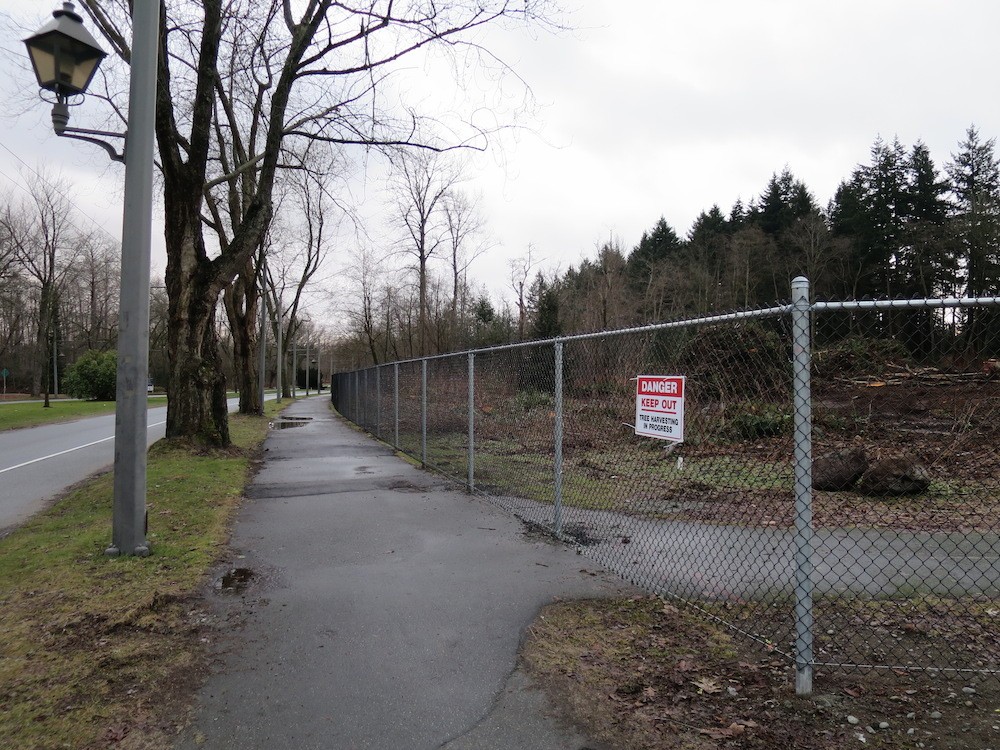 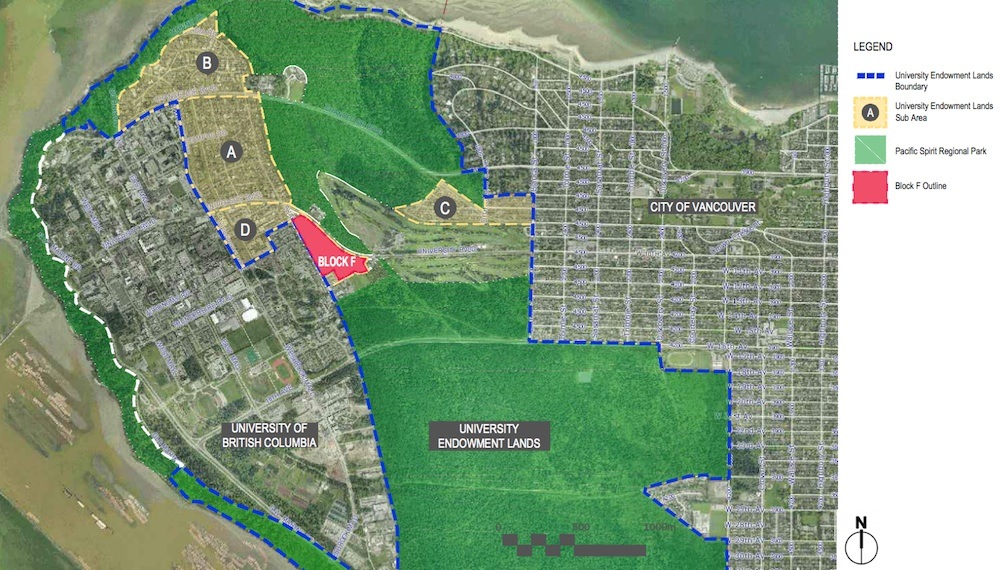 Block F, highlighted in red, will be mostly cut down to make way for the development. (Image: Musqueam Indian Band)

There will be dozens of buildings ranging between three and 18 storeys in height to include both townhouses and condominium units. When fully complete, the new neighbourhood will have 1,250 units – comprised of market rental, market residential, and below-market workforce residential units –  housing between 2,150 and 2,500 residents.

A 30,000-square-foot retail village with restaurants, coffee shops, small businesses, and a grocery store is planned for the northwest corner of the site at the intersection of University Boulevard and Toronto Road.

Altogether, the development will have a floor area of 1.25 million square feet, giving it a relatively low floor space ratio (FSR) density of 1.75 FSR.

Diagram showing the heights of the buildings in relation to the nearby tree line. (Image by: Musqueam Indian Band)

Proponents will also build a 15,000-square-foot community centre that “provides three times the warranted demand of the Block F project,” according to the approved rezoning plan. The community centre will provide a gym, fitness centre, and both indoor and outdoor court play for volleyball, badminton, and basketball. 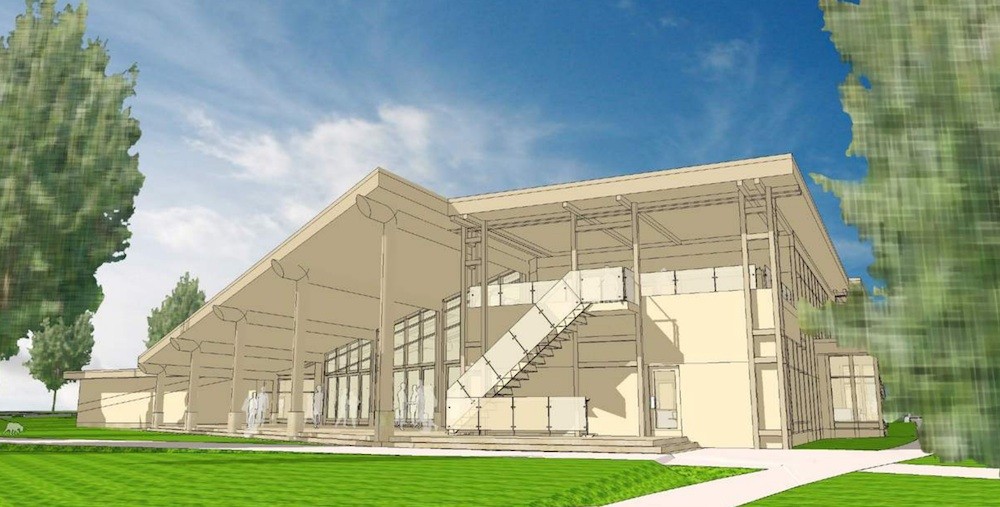 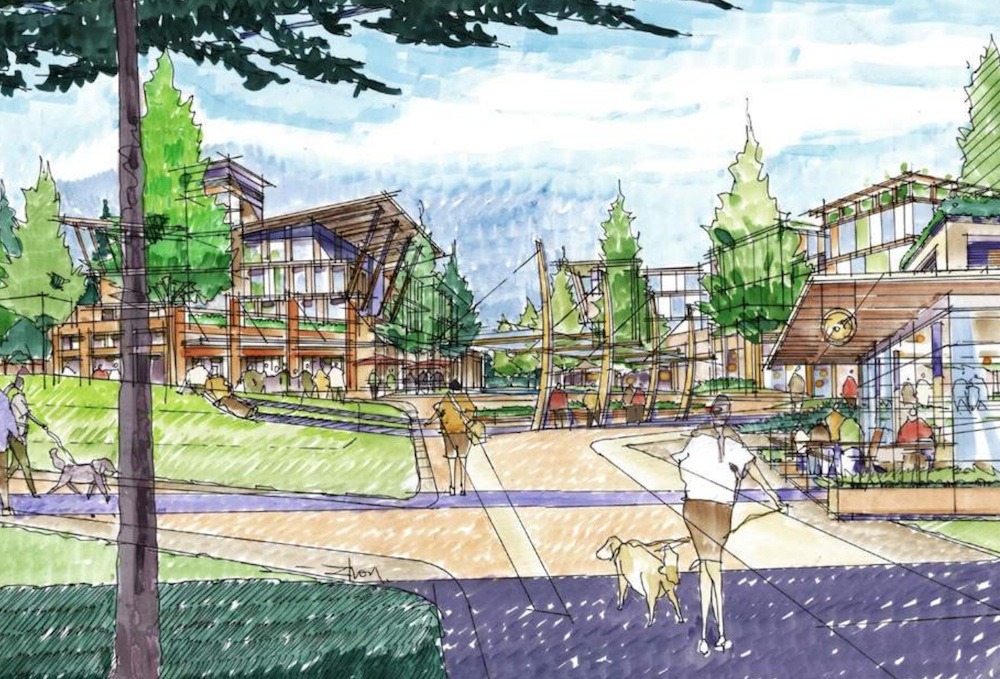 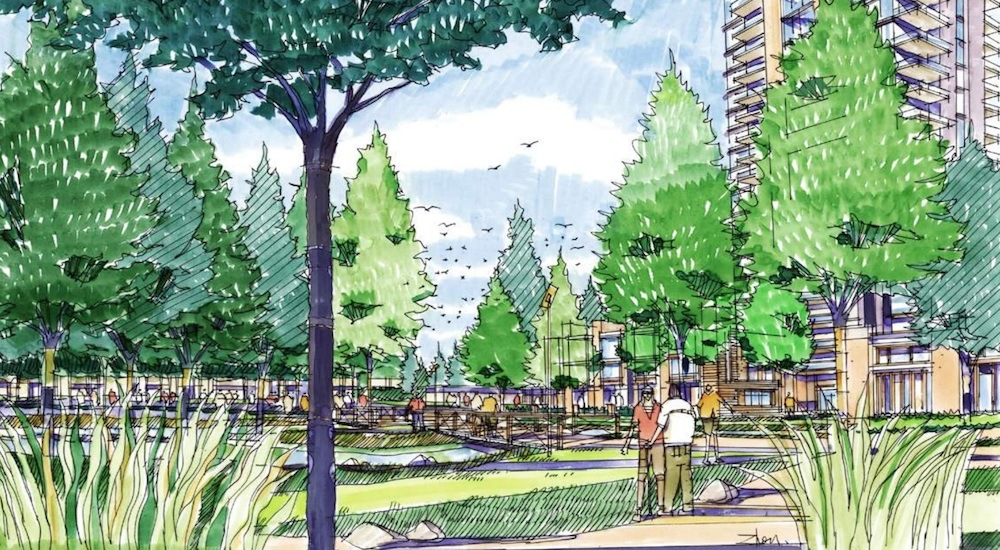 Artistic rendering of the wetlands as well as Forest Park and one of the tallest towers in the background. (Photo by: Kenneth Chan / Daily Hive)

Eight acres of the site will be utilized as publicly accessible open space, including the retention of 3.1 acres of Pacific Spirit Park’s forest in the middle of the neighbourhood as a ‘Forest Park’, with some open green spaces, and the creation of a 0.7-acre wetland with islands that runs from the ‘Forest Park’ to University Boulevard. This wetland area is the starting area of an existing creek and already naturally floods during heavy rainfall events.

Pacific Spirit Park’s Sword Fern and Fairview trails runs through the site, and both trails will be ‘recreated’ to an extent.

A 1.2-acre plaza suitable for hosting community events is planned for the retail village. 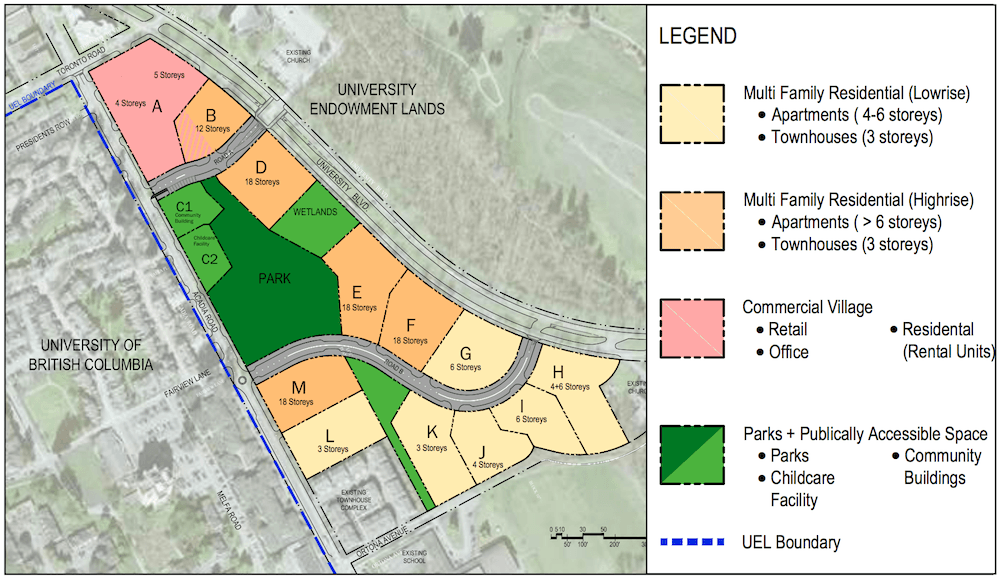 An initial rezoning application incorporated a 120-room hotel and buildings up to 22 storeys in height, but both were later axed and replaced with purpose-built rental units and buildings no higher than 18 storeys.

If all goes according to plan, the new neighbourhood will be fully complete by 2027. The project will be built in over four phases, beginning with an area that includes some of the development’s tallest residential towers, the retail village, community centre, ‘Forest Park’, and wetlands. 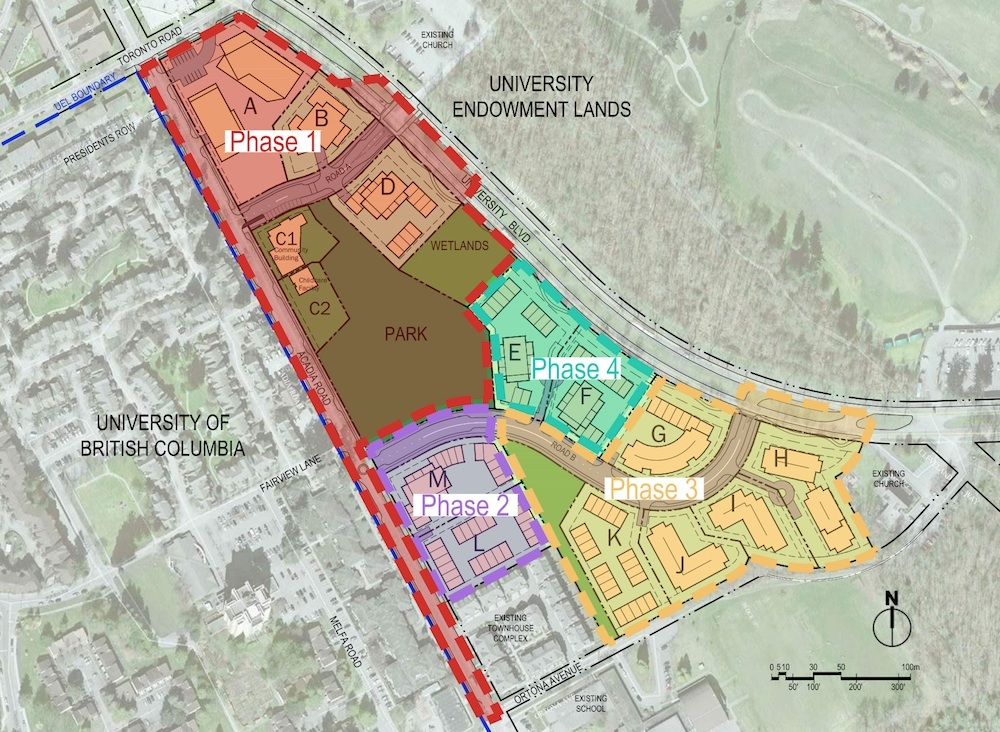 Pacific Spirit Park, which makes up most of the area of the University Endowment Lands, has shrunk over the past three decades from the University of British Columbia’s development activities. Close to 30 acres of the forest were cleared in the 1980s for the construction of Hampton Place, and in the late 2000s about 70 acres of forest were cut down in an area south of the campus to build the 110-acre Wesbrook Village neighbourhood.

First of several projects to come from Musqueam Indian Band

Block F is one of several sites across Metro Vancouver that were returned to the Musqueam Indian Band as part of the 2008 Reconciliation Agreement with the provincial government.

Other sites include the adjacent 120-acre University Golf Course, which must remain as a golf course until at least 2083 under the agreement, and the land in North Richmond that River Rock Casino sits on.

As well, they have a joint venture with the Squamish and Tsleil-Waututh First Nations and Canada Lands Company to develop the 90-acre Jericho Garrison Lands, recently acquired from the federal and provincial governments in a deal worth hundreds of millions, in West Point Grey.

Private school West Point Grey Academy, which has nearly 1,000 students, and the Vancouver Park Board’s Jericho Hill Centre and Jericho Hill Gym and Pool could be forced to relocate when their leases on the lands end in 2020.

Additionally, more than a decade ago, the First Nation made public its plans to develop its reserve lands on the south end of the Burrard Street Bridge with residential and office towers, but this project seems to have stalled.

Other First Nations in Metro Vancouver are developing their own development plans on lands they own.

The Squamish First Nation plans to develop its North Vancouver reserve lands on the north ends of the Ironworkers Memorial Bridge and the Lions Gate Bridge. The site near Ironworkers Memorial Bridge could be turned into a major shopping centre with nearly 500,000 square feet of retail while the envisioned scale of residential and commercial development on the significantly larger reserve lands to the east of the Lions Gate Bridge would become the new ‘downtown core’ of the North Shore.

Towards the southern areas of the region, the Tsawwassen First Nation have been busily developing a 1,100-acre parcel of land near the Tsawwassen ferry terminal into industrial, residential, and retail uses, including Tsawwassen Mills shopping centre which opened last fall.