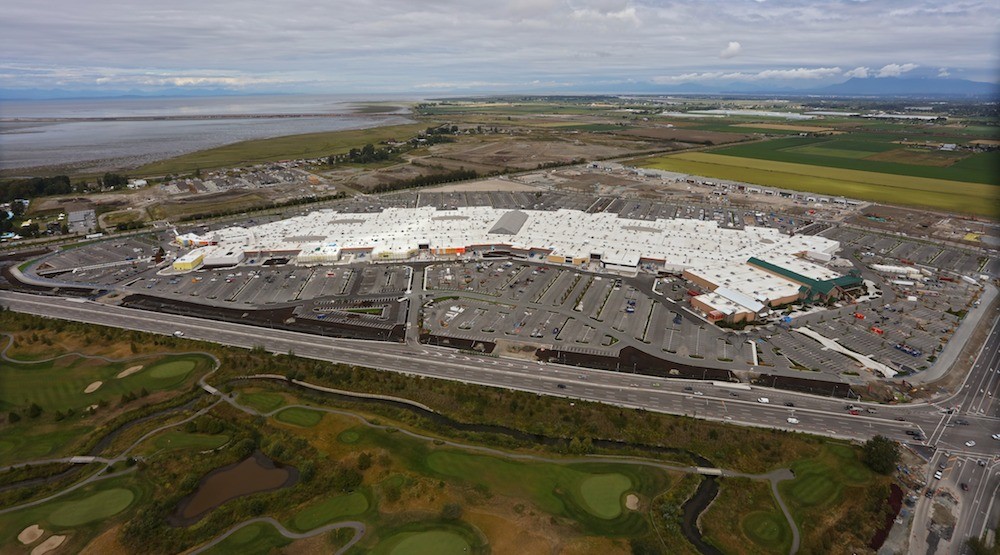 Upon pulling into the parking lot of Tsawwasssen Mills for the first time, you immediately get a sense of the absolute sheer size of this new shopping centre.

Unlike public transit-friendly McArthurGlen YVR Airport Outlet Centre, the 1.2-million ft2 mall – located near BC Ferries’ Tsawwassen terminal – is completely indoor and its 180 shops, eventually growing to 200, are a combination of outlet shops and premium brands. All of this is surrounded by a sea of asphalt for 6,000 parking stalls.

However, most of these stores can already be found at the airport outlet centre or in downtown and other shopping centres across the region. Two of the mall’s largest retailers, Saks Fifth Avenue OFF Fifth and Bass Pro Shops, are new to Metro Vancouver and both retailers plan on opening several other locations elsewhere in the area.

Not reinventing the wheel

Overall, Tsawwassen Mills is impressively designed, and it had to be – its designers fully understood the mall had to be a ‘destination’ on its own as it is a distance away from major population centres and not served well by public transit.

With all that said, the mall is not reinventing the wheel. Aside from the First Nation-themed interior finishings, Tsawwassen Mills essentially mirrors Vaughan Mills in Toronto and CrossIron Mills, built in 2004 and 2009, respectively.

What separates Tsawwassen Mills from the two other Ivanhoe Cambridge-developed properties however, is who is involved.

Future projects on this swathe of land will include the full build-out of 2,200 homes for 6,000 new residents in the area, a 600,000 ft2 strip mall opening early next year with Walmart, Rona, and Canadian Tire as the anchor tenants, and a 334-acre industrial park positioned next to Deltaport to support port activity. A proposed LNG plant and export terminal northeast of the ferry terminal was rejected by band members late last year.

There is no question that the returns from the continued agricultural use of the lands would be severely limited, whereas commercial and real estate development generates significantly more jobs and tax revenues for the First Nation, allowing its members to enjoy a higher quality of life and exercise their full aboriginal rights.

But on a whole for the Metro Vancouver region, the economic return from this type of economic development is limited when examined on a macro, long-term scale.

Putting the land to better use

TFN has used precious, soil-rich farmland to build commercial and residential developments, types of economic development that could also be built within the existing urban containment boundary – ideally near transit. And above all, it falls out of line with the regional district’s efforts to prevent the expansion of urban sprawl and instead focus growth in dense areas.

If the lands were to be exclusively used for industrial purposes, an economic case could be made for the use of these agricultural lands, albeit it would be a highly controversial one.

Metro Vancouver is quickly running out of suitable industrial lands for job-creating businesses that support the function of the region’s economy. Warehouse space is hard to come by, and many spaces are increasingly encroached or entirely developed by residential projects that generate more tax-revenue-hungry municipal governments.

For instance, it took years for Amazon to find a warehouse space suitable for its operations in Metro Vancouver. Companies that are not so lucky will look elsewhere, particularly Calgary and Seattle, for industrial land that fits their specifications.

A recent study commissioned by the Port of Vancouver found that approximately 1,000 acres of vacant lands remain in the region, but this will be depleted by the end of the decade given growing demand. Between 1,500 and 3,000 acres are needed over the next five to 10 years to support not only the large segment of the regional economy that is fuelled by port operations but also the Canadian economy.

After all, the Port of Vancouver is Canada’s largest port: About 20% of the value of all the goods traded by Canada pass through the port facilities in Metro Vancouver.

At the very least, such a site should have been used for a type of development found nowhere else in the region, perhaps even a large world-class amusement park given that Tsawwassen sees far more sunshine and less precipitation than anywhere else in Metro Vancouver.

Less than 20 years ago, the provincial government selected nearby Burns Bog as the site for a proposed job-creating, Disney-like theme park resort with a movie studio, and the area’s weather was one of the key reasons for the site’s selection. But that project never saw the light of day due to the environmental impact on the sensitive bog lands, and the bog was later turned into a protected area.

While the Tsawwassen First Nation’s lands are used in the most efficient way to achieve the band’s goals, the same cannot be said for the best interests of the region.

Metro Vancouver’s geographical area is tiny; when the protected mountain watersheds, parks, and agricultural reserves are taken out of the equation, just 840 km2 is either developed or available for urban development. Land use needs to be smart.

This is not an assertion that Tsawwassen Mills will be a flop, because there is every indication that it will be a huge success based on the proven business models in Toronto and Calgary and other similar suburban shopping centre developments elsewhere.

But if farmland is going to be destroyed, it better be used in the most efficient way possible.