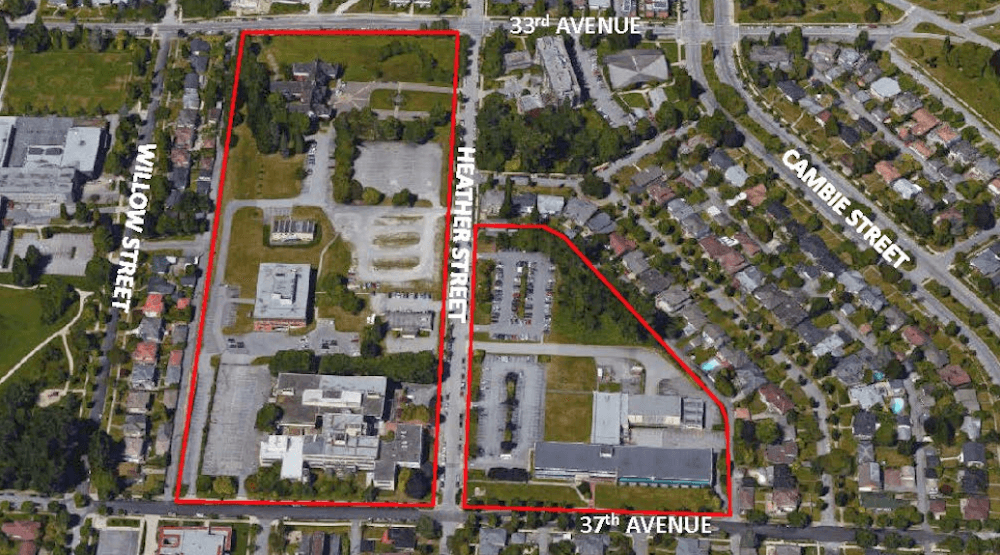 The planning process to redevelop a largely vacant 21-acre site in Vancouver’s South Cambie neighbourhood is set to begin after City Council approved the creation of a planning program last month for the land’s future use.

Located just one block west of Cambie Street and Queen Elizabeth Park, and framed by 33rd Avenue to the north, alleyways behind Willow and Ash streets to the west and east, and 37th Avenue to the south, the property was previously the headquarters and operations base of the RCMP’s E Division until 2012 when the police force moved to a new $1-billion campus in Surrey. 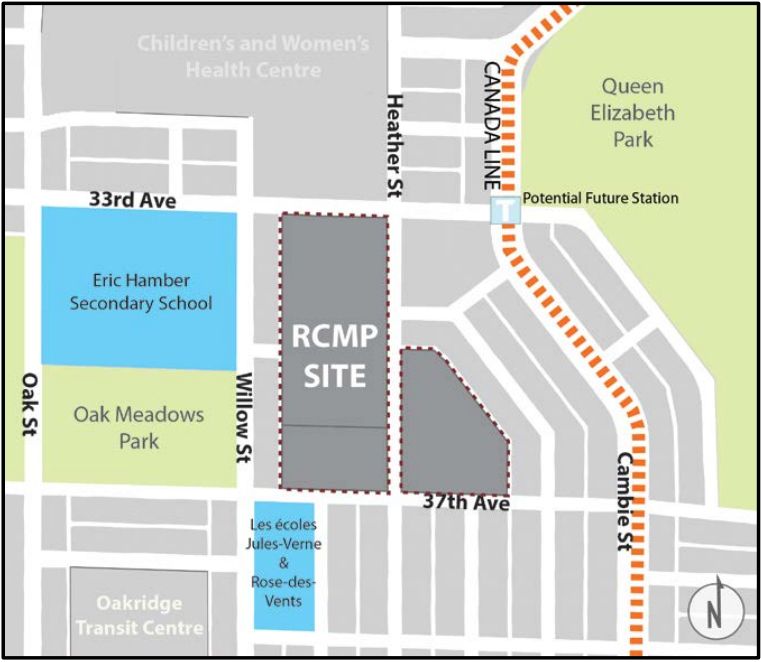 At its peak, approximately 1,500 people worked at the police headquarters, which consisted of office buildings, a gym, workshop and garage, lecture theatre, cafeteria and kitchen, mess hall, surface parking lots and grass fields.

There are two buildings of heritage significance, such as a 1920-built, Tudor-revival Fairmont Academy training building facing Heather Street, and a 1953-built administration building on 37th Avenue.

Two years after the RCMP’s departure, the site was purchased from the federal government by a joint venture between federal crown corporation Canada Lands and two First Nations bands, the Musqueam and Tsleil-Waututh, for $307.2-million in a deal that also included the 52-acre Jericho Garrison Lands in West Point Grey.

Current policies created in 2004 allow buildings of up to four storeys to be built on the site. But the property’s new owners are pursuing greater density and heights given that the site falls within the Cambie Corridor Plan created in 2011 that encourages growth and density along the area in advent of the Canada Line. Additionally, the site is just one block away from the future Canada Line train station at the intersection of Cambie Street and 33rd Avenue.

“The Cambie Corridor Plan and proximity to the Canada Line warrant exploration of increased heights and density on the RCMP Fairmont Lands,” reads a staff report.

With Oakridge Centre mall nearby, it is expected that any redevelopment will be more housing focused and less commercial oriented. Under the municipal government’s Rezoning Policy for Sustainable Large Developments and the Priority Action Plan, at least 20% of the residential units and floor area will need to be dedicated for affordable housing and at least half of this allocation must be suitable for larger families with children.

The old RCMP headquarters site is just one block north of TransLink’s 13.8-acre old bus depot, which will be redeveloped into a new dense residential area of 1,000 to 1,200 units with building heights ranging between three and 15 storeys. City Council approved the policy statement for the bus depot in December 2015.

A similar policy statement process will begin this fall and take between 12 months and 18 months to complete. The process to rezone the First Nation’s bands’ Jericho Garrison property, which now spans 90 acres following the $480-million acquisition of the provincial government’s parcel of the site this past spring, is expected to take several years.

Other major redevelopment sites along the Cambie Corridor include Vancouver Coastal Health’s (VCH) 25.4-acre Pearson Dogwood site, where over 2,000 residential units are planned. To support the density, VCH and developer Onni have committed to funding the construction of a future Canada Line station at the intersection of 57th Avenue and Cambie Street.

A major $1.5-billion redevelopment was approved for Oakridge Centre mall, but proponents with the project announced earlier this year they will be scaling back the project considerably after discovering a shallow aquifer below the mall.