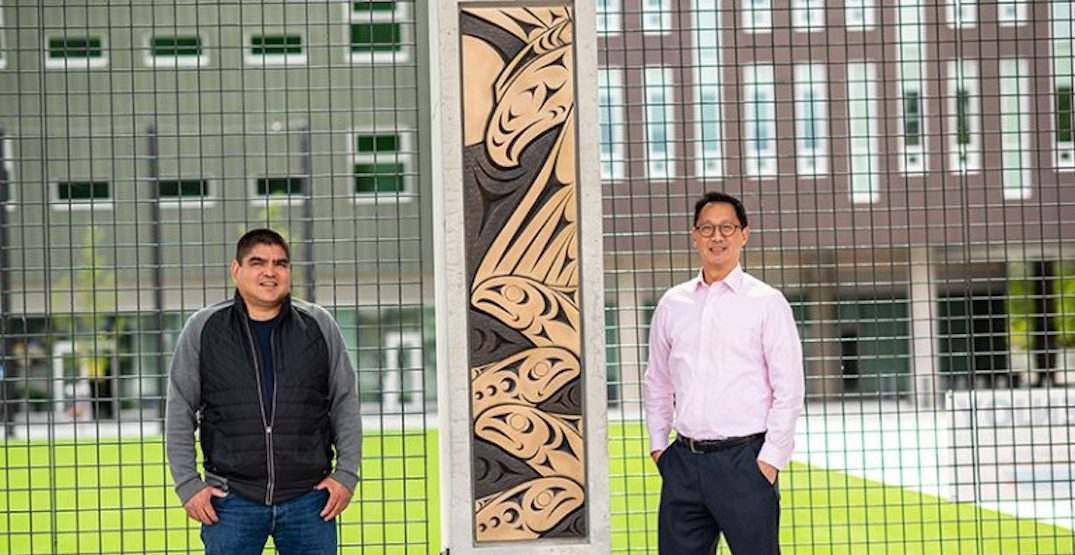 The public art was recently installed on the concrete pillars lining the covered walkway separating the eastern perimeter of the field and the UBC Bus Exchange.

The designs were created by Musqueam artist Brent Sparrow, who spent two months on different wood carvings featuring eagles, thunderbirds, and salmon. This was the first time his carvings were cast in bronze. 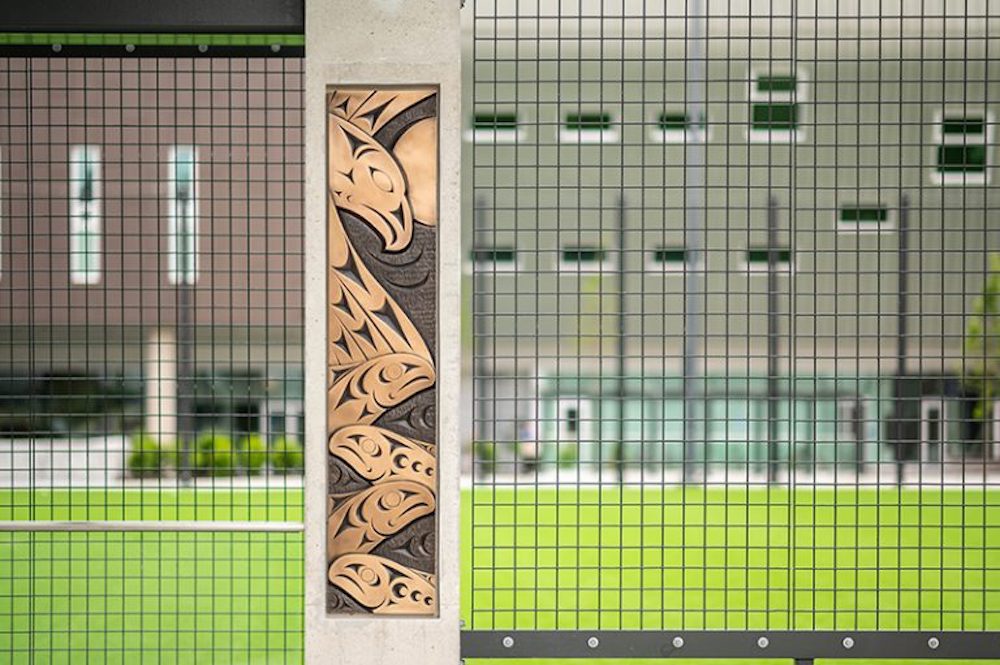 “These vertical and linear pieces symbolize many paths, many directions, many journeys. Paths used for thousands of years by Musqueam peoples, are still in use today by many thousands of people. This place is a way of life,” reads his statement on the designs.

“As a Musqueam fisherman, I have seen many salmon transformations in the rivers since my childhood. In this piece, salmon are messengers carrying their own stories. They are being carried by the wings of these birds – both protected by the thunderbird and used by the eagle. This piece is a metaphor for the need for balance. Eagles, salmon, and thunderbirds, together, are uplifting and inspiring: symbols of protection and enlightenment.” 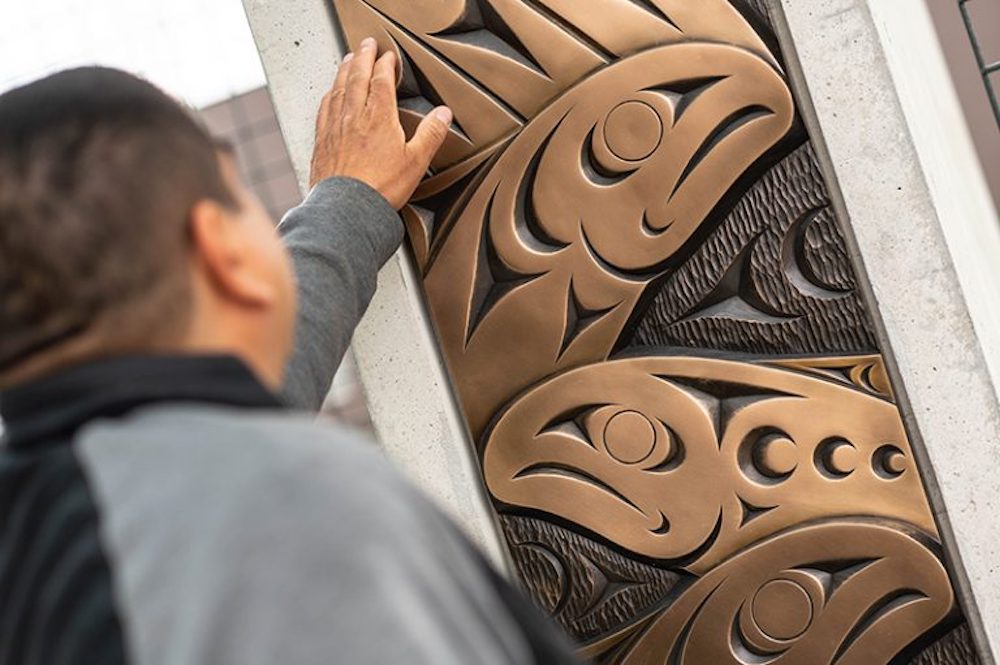 Sparrow also designed the 2016-installed Musqueam Post at the west side of the intersection of University Boulevard and East Mall, and the 2012-installed House Post in front of the Peter A. Allard School of Law.

He comes from a traditional carving household; his mother, Susan A. Point, is known for creating major public artworks for the Seattle Art Museum, City of Vancouver, City of Richmond, Seattle Children’s Hospital, and SkyTrain’s YVR Airport Station. 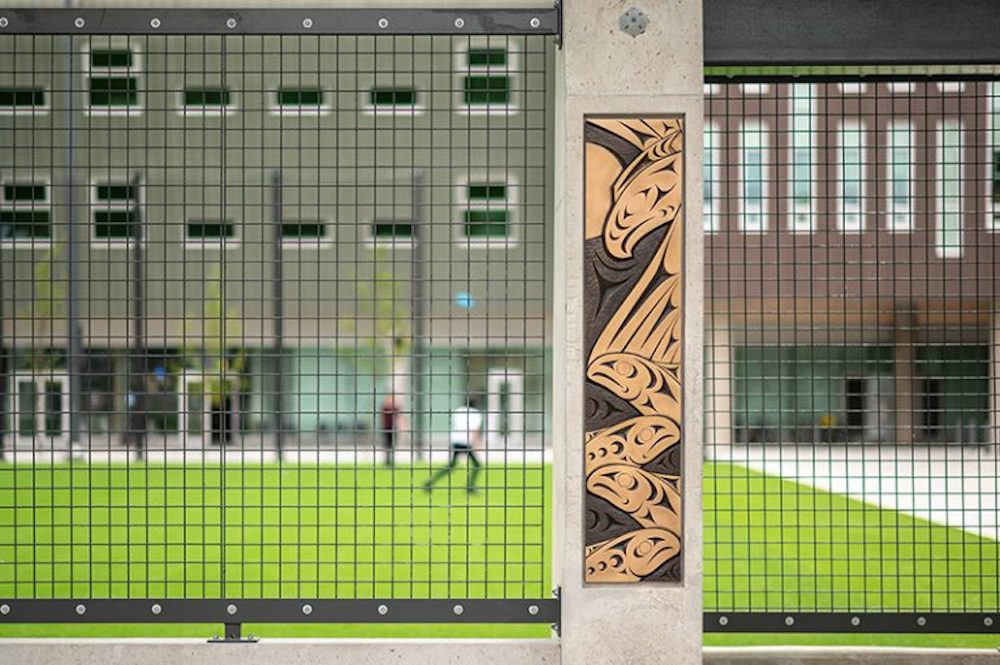 The new 57,000-sq-ft turf field, sitting on the footprint of the demolished old aquatic centre, can be divided into three separate playing surfaces.

Due to the site’s constraints, the new field is smaller than the original natural grass field in the area.

Special events such as the AMS Block Party previously held on the grass field are now located on the large hard plaza on the west side of the Nest Student Union Building.

The field doubles as the rooftop of the new MacInnes Field Parkade — an underground single-level parkade with 216 short-term vehicle parking stalls. The combined cost of both the parkade and field is $12.4 million.