A UBC fraternity has removed one of its members after he allegedly shared an image mocking George Floyd’s death.

In a statement posted to Instagram over the weekend, UBC’s Delta Kappa Epsilon chapter shared its new anti-racism strategy and addressed criticism over how it handled the situation with the ex-member.

“We want to make it clear that this individual’s actions do not reflect the values, perspectives, and qualities that we strive to uphold,” it said.

Advocacy organization Black Vancouver shared the racist image in question on Instagram over the weekend, where it asked followers to tag Delta Kappa Epsilon and its international headquarters to take action.

In the racist image, the ex-fraternity member appears in a Snapchat photo with the message “Out here looking for a [racial expletive] to put my knee on his neck.”

Another student who was a member of Delta Kappa Epsilon told Daily Hive the ex-member initially shared the photo on June 2 in a group chat with other students who joined the fraternity at the same time as him. 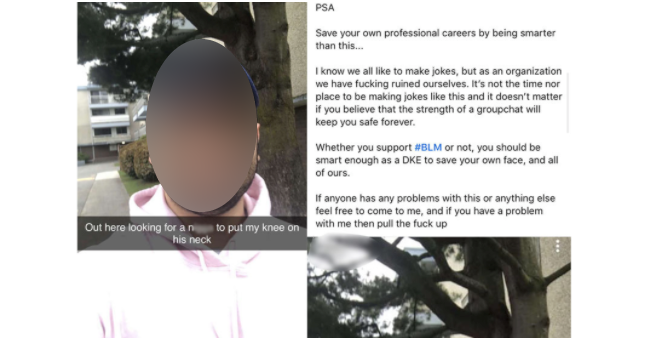 The student Daily Hive interviewed requested to stay anonymous to avoid retaliation from other members of the fraternity.

He said a second-year fraternity member posted a screenshot of the racist image in the fraternity’s Facebook group for all members to see and called on fellow members to do better.

But he said fraternity executives allegedly deleted the post and told the second-year student they didn’t want to create a divide within the chapter.

The second-year student ended up dropping out of the fraternity because he was discouraged with how complicit it was with racism.

“There are guys who don’t think this is a problem,” the student Daily Hive spoke with said.

He also criticized the chapter for addressing the issue publicly nearly two months later instead of right away. He said Delta Kappa Epsilon began the process of removing the student behind the image on June 12, 10 days after he allegedly first shared it in the group chat.

Another student also shared their frustrations with Delta Kappa Epsilon anonymously on the Untold UBC Greek Instagram page over the weekend.

“Being part of the Greek system means complying with institutional racism, and the frats, execs, or the members just don’t care,” the anonymous student said. “The whole system perpetuates racism no matter how much they deny it.”

Daily Hive reached out to Untold UBC Greek to hear more, but since their form submissions are anonymous it’s not known whether that student is a member of Delta Kappa Epsilon or another Greek organization.

“IFC would like to reiterate that bigotry of any form has no place in Greek Life. We are cognizant of the fact that for every incident that is reported, there are many others that [are] not,” it said.

UBC spokesperson Matthew Ramsey said the university is aware of the image and is investigating.

“We are treating the allegations very seriously, as we would with any allegation of racism,” he said.

He encouraged students to reach out to the school’s counselling program if they need mental health support as a result of what happened, and also suggested anyone who sees an incident of racism to make a formal complaint through university channels.

(2/2) Privacy law prevents us from discussing the specifics of the incident you are referencing; we want to assure you that UBC treats allegations of racism very seriously.

“Actions are being taken and University processes are being followed,” said the school.

“Privacy law prevents us from discussing the specifics of the incident you are referencing; we want to assure you that UBC treats allegations of racism very seriously.”