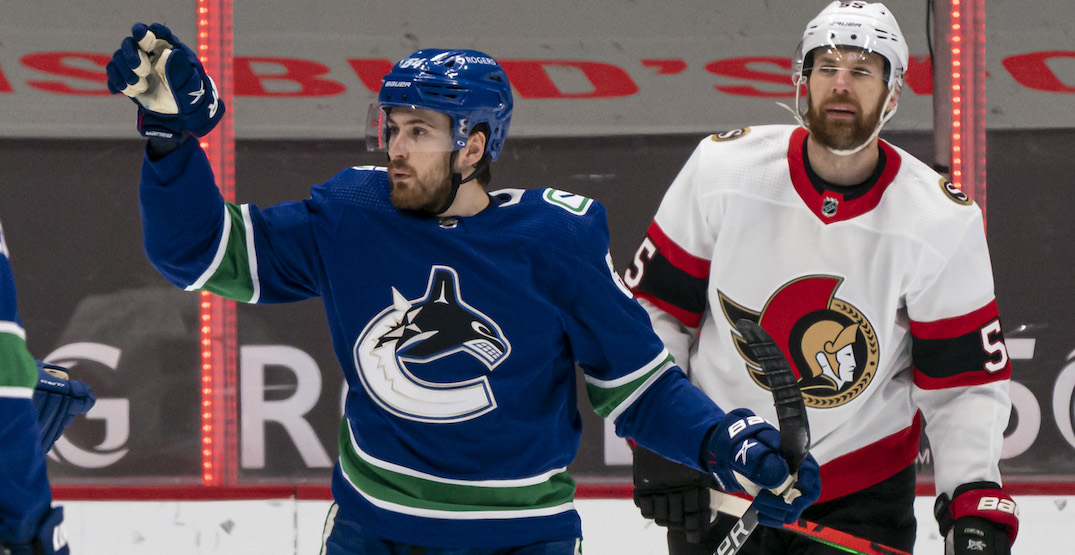 The day that Tyler Motte was traded to the Canucks was a disappointing day for many fans in Vancouver.

That’s probably being too kind.

Fans were pissed, and the local media was holding Jim Benning’s feet to the fire. And the reaction was perfectly reasonable.

It’s been nearly three years since the Canucks acquired Motte, along with Jussi Jokinen, from the Columbus Blue Jackets in exchange for Thomas Vanek.

The hope at the time was that Vancouver, still in the darkness of a fumbled rebuild, would cash in on Vanek — a player they signed for cheap in free agency, but who scored 17 goals and 41 points in just 61 games with the Canucks.

But instead of a draft pick — a third-rounder would have sufficed — the Canucks got Motte, a 22-year-old now on his third team with only 64 games of NHL experience.

Not even Benning sounded overly happy with the deal he got, defending the trade by saying: “You can’t do something that is not available to you. I would have preferred to get picks. It wasn’t available to us.”

Jim Benning says no teams were giving up draft picks for Thomas Vanek.

"You can't do something that is not available to you. I would have preferred to get picks. It wasn't available to us…" #Canucks #NHLTrade

Given the apparent lack of interest in Vanek at the time — let’s assume a third-round pick wasn’t on the table at the time — the deal doesn’t look so regrettable now.

Motte was a player many had pencilled in for Utica at his first Canucks training camp in 2018, but instead, he forced his way onto the team with an unmatched work ethic, which has been his calling card since arriving on the west coast.

Three years later, the 25-year-old from St. Clair, Michigan has proven to be a very serviceable player for the Canucks. Still a bottom-six forward, he plays on the Canucks’ top penalty killing unit, and has chipped in offensively from time to time.

This season, Motte is on a tear, already with five goals in his first nine games — tied for team lead and second in the NHL. If you include his surprising offensive contribution in last year’s playoffs, he now has nine goals in his last 18 games.

Motte has been part of a surprising development this season from the Canucks’ fourth liners, who have largely had trouble scoring goals and performed poorly by shot metric stats in recent years.

Shot goes off Motte's leg then off the Sens' Mike Reilly and into the net for Motte's 2nd goal of the game! #Canucks are up 5-1 pic.twitter.com/cGM2L9Yk5a

Sure, Motte scored a lucky goal on Wednesday when the puck bounced off a defenceman and in, but good things happen when you go to the net. His first goal was a better example of that, as he drove hard to the net to pick up a juicy rebound.

By expected goals this season, Motte ranks second (52.80 xGF%) among Canucks forwards — so this may not be all luck.

“I don’t think a whole lot’s changed, maybe a little bit more chemistry, talking a bit more out there, but I think our mentality stayed the same,” Motte said of his line after scoring a pair of goals in Wednesday’s win against Ottawa.

“We wanted to get in on the forecheck, get on some pucks, come out with possession, and get pucks and bodies to the net. I think we get a little bit more credit now that a few have gone in, but I don’t think our mentality or our job description has changed at all.”

Motte isn’t likely to be elevated in the lineup or receive power play time, nor is he likely to be among the team leaders in goals at the end of the season. But there’s a lot to like about him, as an energy guy playing in a bottom-six role.

Given the disappointment in Canucks Nation on the day he was acquired, he’s been a pleasant surprise.