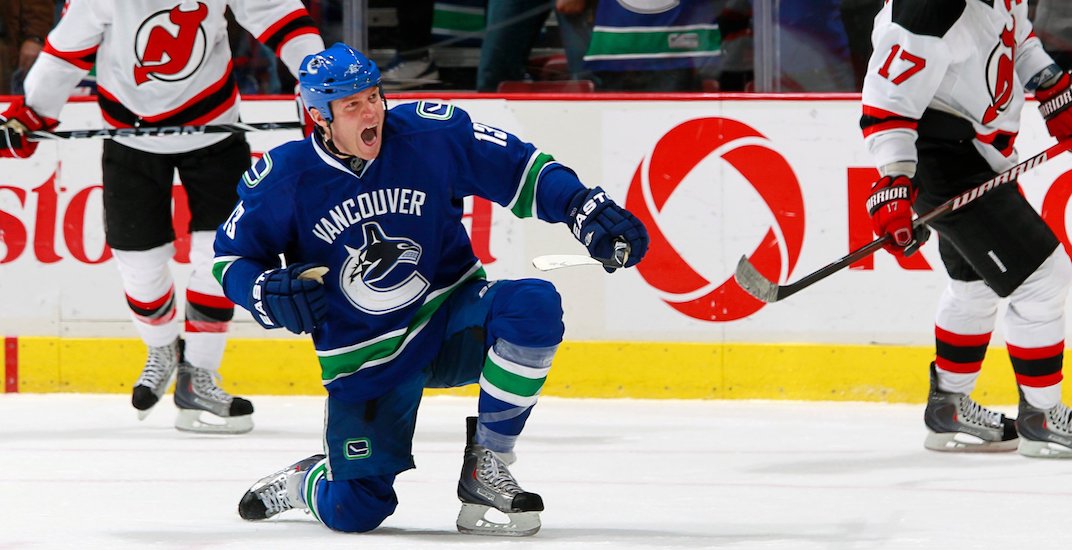 Who needs Elias Pettersson when you have… Brandon Sutter?

By doing so, he became the fourth member is his esteemed hockey family to score three goals in one game in the NHL. He’ll also go down as one of the more unlikely hat trick scorers in Canucks history.

Through his 13 seasons, Sutter has only scored more than 20 goals twice in a season. He also registered more than 40 points once — back in 2009-10 as a sophomore with the Carolina Hurricanes.

Sutter’s unlikely three-goal outburst was the inspiration for this list, which includes all of the most random hat tricks in Canucks history.

Early in Dave Babych’s career with the Winnipeg Jets and Hartford Whalers, the rugged defenceman was an offensive threat. Babych registered at least 40 points in each of his first 11 NHL seasons.

By the time he came to the Vancouver Canucks in 1991, that offensive side of his game wasn’t as pronounced.

However, he did post a hat trick on November 22, 1991 against the Calgary Flames. It was a surprising outburst, considering that he had only 23 goals in 409 games with Vancouver, and he never registered more than five in a season.

The pride of St John’s, Newfoundland wasn’t in the NHL for long, spending only the 2000-01 campaign as a full-time NHLer with the Vancouver Canucks.

15 of his 27 career goals came with the Canucks that year, and three of them came in one night against the San Jose Sharks.

Despite only playing 10:57 on December 8, 2000, Harold Druken made the most of it by scoring three goals to register his first and only career hat trick. What made it even more random is that two of those goals came in the final five minutes of the game — with Donald Brashear registering both primary assists.

Although Jannik Hansen spent most of his career as a pesky bottom-six forward, he did have some offensive touch in his game.

The Danish forward registered two hat tricks with the Canucks — becoming the only “random” player on this list to do so twice. Once was against the Chicago Blackhawks in 2014-15. He registered another hat trick in the following season as well against the Pittsburgh Penguins.

As the forgotten player in the famed Roberto Luongo trade in 2014, Shawn Matthias spent one full season with the Canucks back in 2014-15.

His best moment as a Canuck came against the Boston Bruins on February 13, 2015. It was the first and only hat trick of his career, and the 18 goals he scored with Vancouver that season was a career-high.

The Kitchener, Ontario native wasn’t an offensive machine in the NHL, despite being drafted fourth overall by the Canucks in 1985.

Similarly to Hansen, however, Jim Sandlak was a bottom-six forward who had the capability of chipping in offence. He hit double-digits in goals during six of his nine seasons in Vancouver.

The only time he hit 20 goals, however, was in the 1988-89 season. That was in part thanks to his only career hat trick, which he registered against the Winnipeg Jets on March 26, 1989.

Do you know what’s even more bizarre than Brandon Sutter scoring a hat trick?

He wasn’t even the first Sutter to do so in a Canucks uniform.

Brandon’s uncle, Rich Sutter, has some of his best offensive success during his four years with the Canucks. Similarly to Sandlak, he was a rugged bottom-six winger who hit the 20-goal mark once, back in 1986-87.

Oddly enough, he registered his only hat trick with the Canucks during one of his worst offensive seasons, a nine-goal, 18-point campaign back in 1989-90. Sutter netted three goals against the New Jersey Devils — the Canucks’ only three goals of the game — in a 3-2 win on October 20, 1989.

Raffi Torres did have some offensive pop despite largely playing in a bottom-six role throughout his career. He had two 20-goal seasons during his first two NHL campaigns with the Edmonton Oilers, but he failed to hit that mark again in his career.

However, he was able to register his only career hat trick against his former team on November 2nd, 2010. This is a great way to end this list of random hat trick scorers in Canucks history, because this is one of the most bizarre hat trick goals you will ever see.