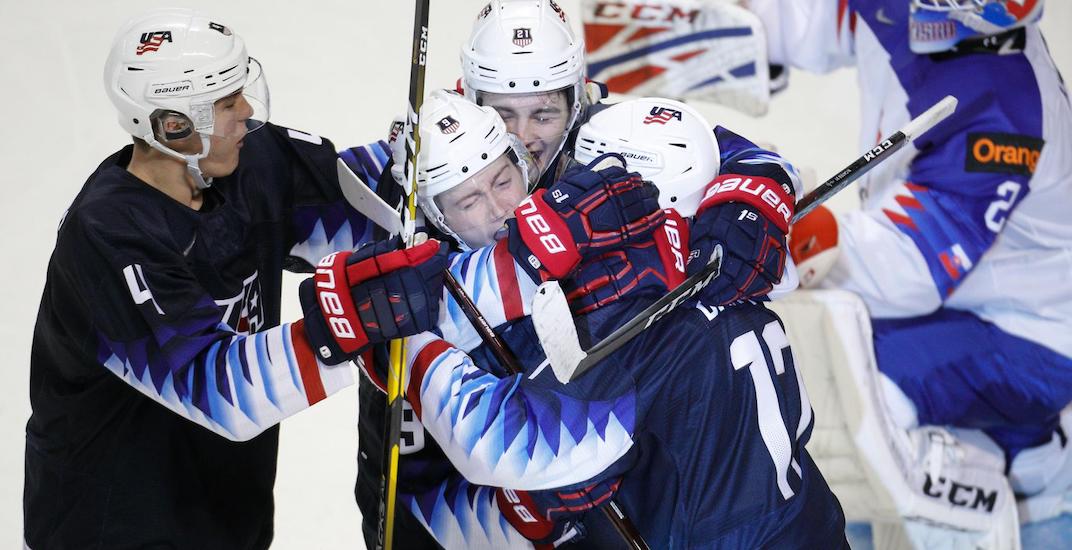 While Canucks fans tuned into Team USA’s opener against Slovakia to catch the player on whom the future of their team’s defence rests, another Canucks prospect may have stolen their attention.

To be fair, defenceman Quinn Hughes – Vancouver’s first round draft pick in the 2018 NHL Draft – was mesmerizing. Here, Hughes shows what he will do if a forward chases him out from behind the net.

No idea what the Slovakian player was thinking when he did this. If you’re the coach of a team facing Team USA and you’re only allowed to tell your team one thing, it has to be Don’t chase Hughes!!, doesn’t it?

The Canucks defensive prospect had at least five shifts or moments over the course of the game where he left those watching shaking their heads. Spin-o-ramas, dekes, speed, he showed them all, and like another young player Canucks fans have fallen in love with, he’s not afraid to pull out the moves.

Even if the curse on Vancouver never ends, and they don’t win the Cup with this new core of players, the team is going to be electric to watch with both Hughes and Pettersson in the lineup.

Back to that other Canuck prospect who turned heads – it was 2018 third round pick Tyler Madden. Madden played alongside Evan Barratt and Noah Cates in the game, and that line turned out to be Team USA’s most potent against the Slovaks, scoring the deciding goal in the 2-1 win.

Madden, who stands at a not so imposing 5-foot-11 and 150 pounds (the lightest player on Team USA by 18 pounds), had one assist and was in position to pile up some more points.

Here is his assist – a pass which Barratt finishes off on his backhand.

Another look at @BarrattEvan's go-ahead goal here in the 3rd 🚨

Later, Madden (No. 9 for USA) showed he has a knack of finding openings too.

Speaking with Madden after the game, I asked if he’s excited to play in front of fans who will cheer for him in the future. Spoiler alert: he is.

“It’s awesome – seeing all the guys with the Canucks jerseys on,” he said.

“Even some kids gave me high fives when I was coming out and were yelling my name. It’s really special to be known and it’s nice to play here because you get to play in front of your future fans.”

I then asked what type of game he wants to show the local fans.

“I want to show them that even though I’m 150 pounds I play gritty and I play tough. I don’t get knocked off pucks too much and I’m very offensive but can shut down on D if I need to.”

Next, I wondered which NHL player he tries to emulate or model his game after.

“Anze Kopitar is one of the guys I watched – obviously a bigger guy but I like the way he plays. I like to think I’m a big guy out there. I like to play like him – good 200-foot game but creative in the offensive zone.”

Watching him, the players who came to mind were Brendan Gallagher and Max Domi – small, relentless forwards who get their points through pure hard work. But hey, if he wants to be Kopitar, let’s not stand in his way.

“I thought he was a bit more aggressive tonight offensively,” said Hastings.

“Everyday he’s with us he’s gaining more confidence. Hopefully that line’s going to feel great about the way they played for us tonight because they made a difference for us.”

🎥 | Catch the highlights from tonight's 2-1 win over Slovakia! #USAWJC 🇺🇸