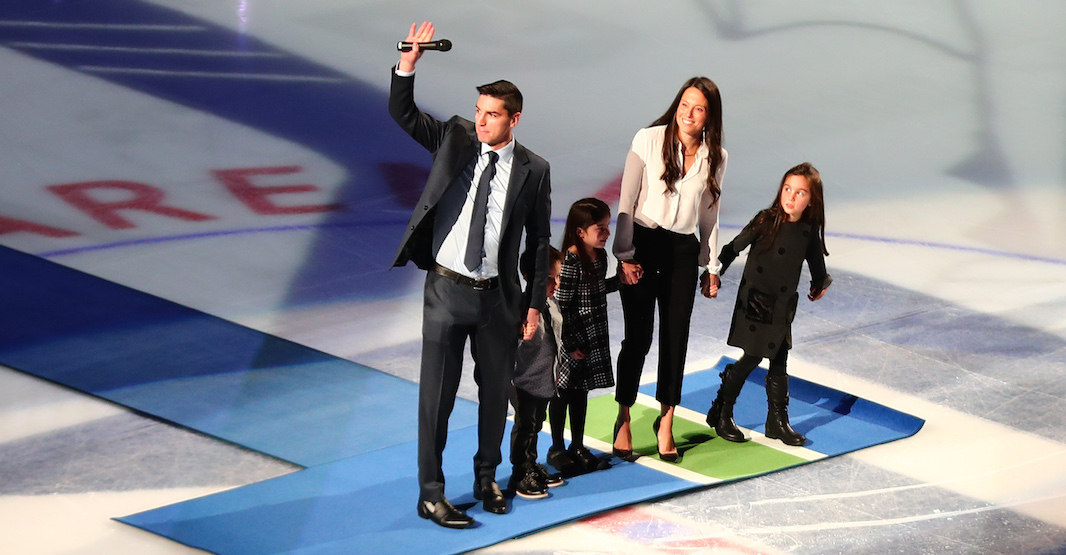 Those were the words of Vancouver Canucks play-by-play announcer John Shorthouse after Alex Burrows scored the most iconic goal in franchise history. A goal every Canucks fan remembers; April 26, 2011, the Game 7 overtime winner against the Chicago Blackhawks.

From that moment onward, Burrows was the “Dragon Slayer.”

The Canucks beat the Ottawa Senators 5-2 on Tuesday, but the most important events of the night happened before the puck dropped.

Burrows was inducted into the Canucks’ Ring of Honour during a touching pre-game ceremony that seemed to bring out feelings of nostalgia for everyone in the building, including the Dragon Slayer himself.

The ceremony began with a touching video tribute from Burrows’ old linemates, Henrik and Daniel Sedin. With his wife and three kids at his side, Burrows delivered a heartwarming speech at centre ice to everyone in attendance.

“It feels good to be back here at Rogers Arena, that’s for sure,” Burrows began.

Watch the ceremony in full here:

“Hockey’s always been my number one passion,” Burrows said. “Ever since I was a kid I always dreamed of playing in the NHL. But passion is not the only thing you need to get to the NHL. For me, hard work, never being satisfied, [having a] never-quit attitude, always wanting to get better, and a great supporting cast around me made it possible.”

Burrows thanked all of his former teammates, including the Sedins, Ryan Kesler, Kevin Bieksa, Roberto Luongo, and Mason Raymond.

“Special thanks to Hank and Danny, you guys are the best… Obviously I want to thank you guys for all the back-door tap ins you guys gave me. But more importantly, you guys always believed in [me] and you guys have no idea what it meant to me. So thank you very much,

“You guys are living legends, future Hall of Famers, and obviously the best role models I could have ever asked for.”

Burrows’ story is an inspirational one because of his unconventional path to the NHL. Clawing his way up through the minor leagues, he worked for every opportunity he got.

His relentless work ethic is something anybody should marvel at, and for young players it’s a reminder of how far hard work can take you.

“I was undrafted, he was undrafted, and he had a long illustrious career,” Zack MacEwan said of Burrows post-game. “It’s definitely something that I have my eye on and being able to play in front of him and represent that way is great.”

Prior to the ceremony, the players also honoured Burrows by wearing his jersey as they took the ice for the pre-game skate.

Gonna tell my kids this is Alex Burrows.

Once the game began, fans didn’t have much time to settle before the roof blew off the place again.

Antoine Roussel – a long-time friend of Burrows – was skating in his first NHL shift since March 13 when he scored the game’s opening goal, capped off with a nice tribute for the Dragon Slayer.

Two minutes into his first game back and @Rous_ant is on the scoreboard! 🐔 pic.twitter.com/13ZbxeFE0x

Roussel admitted he had thought about pointing to Burrows’ Ring of Honour suite if he scored as a way of honouring his friend.

“He’s like a big brother that I never had,” Roussel said post-game. “He took care of me big-time when I was younger. Even if I was on the other team, we trained together every summer for ten years and he taught me all the ropes.”

It was a memorable night for another reason for MacEwen, who scored his first career NHL goal on a nice deflection that beat Anders Nilsson.

Same goes for Oscar Fantenberg, who scored his first goal as a Canuck in just his second game.

Thatcher Demko made his first start since allowing eight goals in Pittsburgh and responded brilliantly. He made 40 saves, including several eye-popping stops in the second period to keep the big lead.

The Canucks have a few days to rest now before they host the Buffalo Sabres at 1 pm on Saturday.

We Are All Burrows! pic.twitter.com/2DqgLc6G9C

Burrows is now officially the seventh member of the #Canucks Ring of Honour! 🙌 pic.twitter.com/Si7DAdpCk6