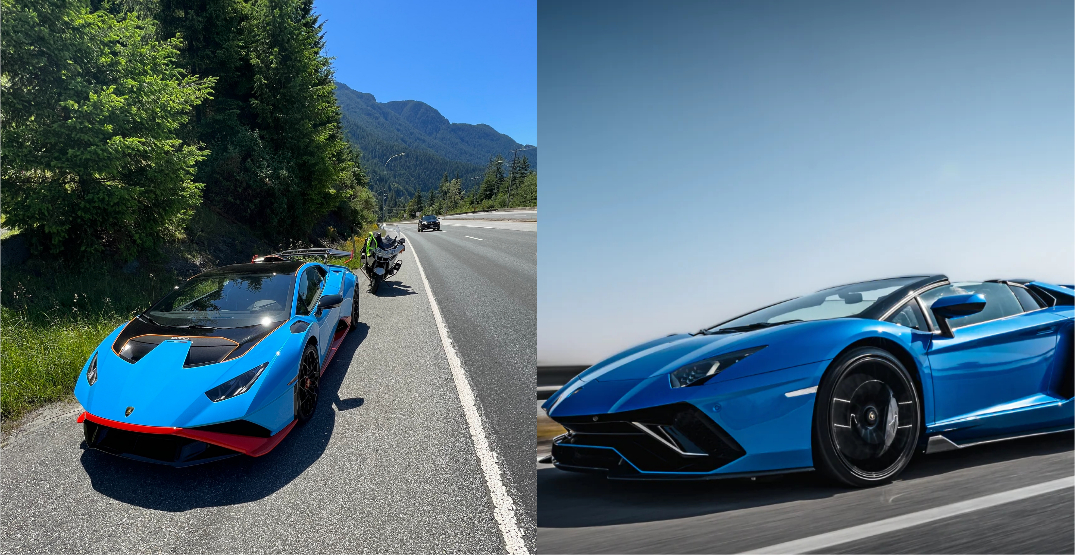 The Huracán STO and the Aventador (West Vancouver Police | Lamborghini.com)

The West Vancouver Police Department (WVPD) impounded two Lamborghinis after they were allegedly clocked on radar going 156 km/h in an 80 km/h zone on a BC highway.

The incident took place on June 24 on Highway 99 just north of Ansell Place. A WVPD Traffic Section officer caught the two Lamborghini’s in action as the drivers were travelling in tandem going Northbound at high speeds.

According to a statement from WVPD, “the officer determined that the two Lamborghinis were allegedly travelling at a speed of 156 km/h by using a radar device.”

Police stopped the vehicles and the drivers were issued violation tickets for excessive speed under the Motor Vehicle Act. Both vehicles were impounded for seven days under provincial legislation.

With the impounding of the high-performance vehicles comes a fine of $368.

One of the vehicles that the WVPD provided a picture of is the 2022 edition of the Lamborghini Huracán STO. Motor Trend says it’s street legal, but also calls it “an extreme vehicle.”

The other vehicle impounded was a 2022 Lamborghini Aventador. The base price for an Aventador is roughly US$800,000.

WVPD is putting out a disclaimer to drivers as we progress into summer: simply slow down.

“According to ICBC, on average, 26 people are killed every year in the Lower Mainland from speed-related crashes,” reads the statement from WVPD.

With the nicer weather comes more opportunity for thrill-seekers to take out their fancy rides and WVPD Constable Nicole Braithwaite says it puts everyone at risk.

“As we continue to see nicer weather, we see an increase in vehicles as well as motorcycles driving at high rates of speed. Our officers will be stepping up enforcement during these next couple of months in an effort to help change this dangerous behaviour.”

If you catch anyone driving dangerously in West Vancouver, you can contact WVPD at 604-925-7300. WVPD asks that if possible, people provide as many details as possible including license plates and vehicle descriptions.