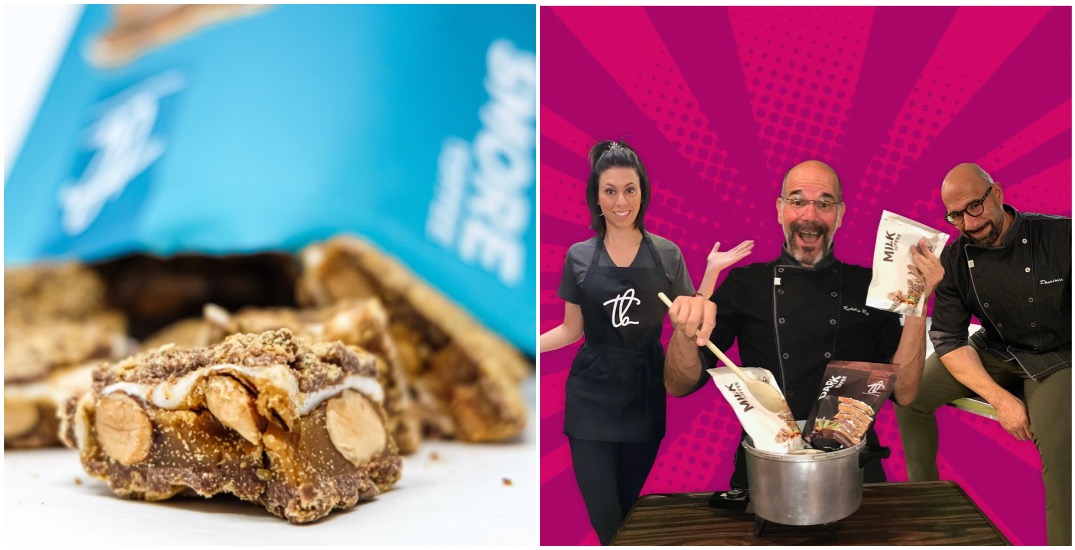 It makes perfect sense that a great idea might come to you during hard times, especially if your product was there for you when you needed it the most.

Business is hard for so many right now, and opening one is even harder. But being called crazy and taking risks are what make the most successful entrepreneurs. They are daring even in the face of adversity.

For two brothers, toffee was always there for them when times got tough. After 15 years of tweaking, making, and perfecting their toffee recipe, Dominick and Nicholas Genova were ready to share it with the world.

In the middle of chemotherapy and a global pandemic, the locally made Two Brothers Toffee was created, and it ended up being their greatest accomplishment.

Vancity has been supporting people in our communities since 1946, like local food creators. As part of our Made in Vancouver series spotlighting local businesses, we talked to Dominic Genova about creating a successful business during tragic times.

“It’s easy to ‘follow the leader’ and copy what others do, especially when it’s proven to work,” Genova told Daily Hive, speaking about developing the concept for Two Brothers Toffee.

“When we developed the concept for our brand, we made one commitment to ourselves and that was to be authentic.  Emulating other brands did not feel ‘right’ to us, because it wasn’t us.”

They didn’t want to copy other brands in the space, so they felt inspired by a company one might not think of when thinking about toffee.

“Our vision was to ‘be the Tesla of toffee’ – luxurious but hip, all at the same time,” Genova told us. “We want to set the trend, not follow the trend, and so our brand aims to do just that!” he added.

Drawing inspiration from elsewhere is important, but ultimately it’s what you hope to create that inspires you the most. Where your passions lie should drive you, and it certainly does for the team at Two Brothers Toffee.

“We were first very inspired by our product,” said Genova. “After perfecting the recipe for over 15 years, we knew we had something very special and very unique.  As we began to envision the possibilities, we began to innovate and think outside of the box, making our product even more distinct.  We knew we had something to offer and we wanted to share it with the world!” he added.

The product inspired them to think of finding success with it, and then that belief in themselves fuelled their vision even more.

“Secondly, we were inspired to chase our dream of owning our own business,” Genova continued. “We have goals to create jobs, employ people in a healthy, fun work environment, and have no limitations on creation.  Ultimately, we feel empowered to make a difference and this is our way of doing it!” Genova added.

One thing every entrepreneur has in common is that they took the leap to give their idea a try. These brothers had absolutely no experience in this industry, but they believed in their product, themselves, and the process.

It was this belief in themselves that got their new business through the challenges of a global pandemic, and got themselves through one of the most difficult times in their own lives. As their business was beginning, Nastasia Genova began the battle of her life.

“I was diagnosed with breast cancer right after my 37th birthday and underwent a double mastectomy and chemotherapy over the span of 6 months,” she told us. While Nastasia battled cancer, the rest of the team perfected the recipe for the toffee. It gave Nastasia an exciting hope, and thankfully she is now in recovery.

It makes it easier to believe in your product when you’ve spent over a decade on perfecting the recipe and method. Now, they’re able to create new toffees, and experiment with delicious flavours based upon their learned process.

We recently also created two vegan toffees to serve the Canadian vegan community which we felt was very underserved in great confectionary creations,” he added.

These flavours sound delicious, and they are, but are made even better by the ingredients they use, and the scientific approach to making authentic toffee.

“The “toffee” on the market usually not toffee, because toffee is very difficult to make,” said Genova. “It’s usually a thin butter crunch, which is a very different product. Two Brothers Toffee is a traditional hard-crack English-style toffee. It snaps when you bite into it, yet it’s soft on your teeth. The science of finding the right ingredient ratios and cooking temperatures to achieve this texture requires great skill,” he added.

What makes the Two Brothers Toffee brand even more special, is how much they’ve given back to the community of Vancouver. Every dollar matters to a young business, and this family was able to create The Amore Organization — an impact focused philanthropic non-profit organization.

“Since we started TB Toffee last August, we have supported BC Cancer Foundation, Vancouver Covid Relief, Vancouver Police Department, local Fire Departments & families that lost their homes in the fires of the areas they serve, all in the form of financial donations or toffee donations,” Genova told us.

Finding success makes it easier to continue to love what you do, but you have to start there. It will show in the product and the experience, and seeing the faces of their loyal customers when the world returns to normal is something the Two Brothers Toffee team are really looking forward to.

“We are very proud to be locally made, and with that, we are eager to meet our customers and have people from all around the city try our products!” said Genova. “The most challenging obstacle Covid has presented is the lack of availability to have face to face, human interaction with our community.  We look forward to spreading our toffee all around the city and mingling with our community once restrictions are lifted!” he added.