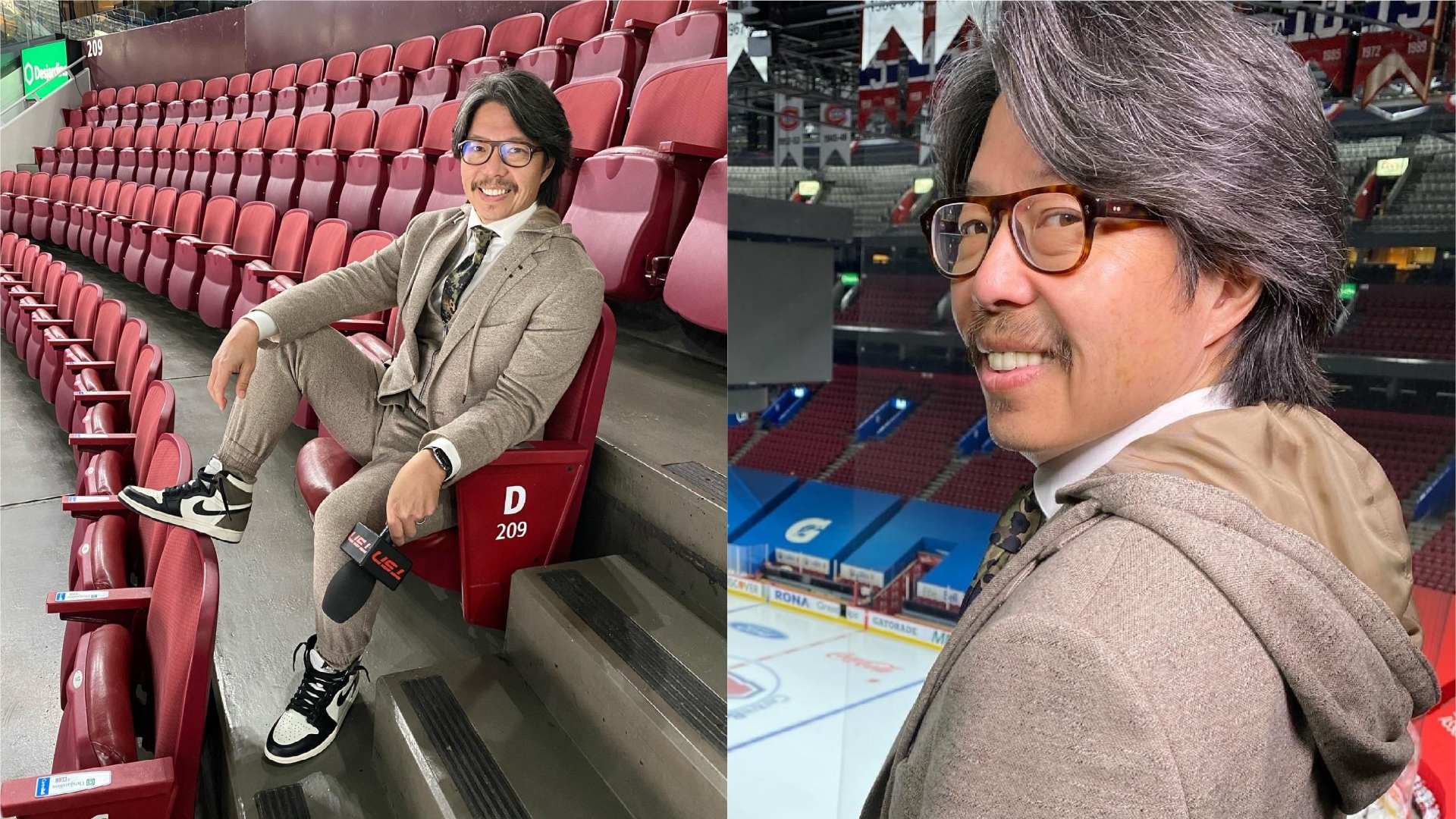 TSN’s John Lu wore a hoodie and sweatpants to work at the Bell Centre on Wednesday night.

But nobody was making fun of this look: a hand-crafted four-month project created by Pellegrino “Pelle” Castronovo, a Montreal-based bespoke tailor who has been working with Lu for the past 13 years and created a hybrid outfit of three-piece suit mixed with more traditional loungewear.

The suit consists of a jacket, a pair of jogger-style elastic pants, and a vest with a hoodie that attaches onto it. The suit also opts for a zipper over a traditional buttoned look.

Of course, Lu completed the look with a pair of sneakers.

“Every single virtual interview that I’ve been doing, if I didn’t have to appear on camera, I’d be wearing like shorts, a t-shirt, a hoodie, sweatpants, or even pyjama bottoms,” Lu said. “We’ve gotten so used to being comfortable in our home work environments.”

The look was unquestionably sharp, receiving over 5,000 likes on his tweet showcasing the outfit.

My tailor/stylist @PellegrinoCastr and I designed what I call my zoom suit a.k.a. The Post-Pandemic. After wearing t-shirts, hoodies, sweats, shorts or PJs during virtual interviews for the last 15 months, this suit was crafted with comfort in mind. pic.twitter.com/EsHRW7EHUz

“I was floored by the response to this,” Lu said. “Maybe this is just one of those little positive signs. It’s something that we did create for the express purpose of marking the end of the pandemic. It’s something that’s fun… because it flies in the face of conventional men’s business attire.”

The outfit, outside of the obvious comfort, comes with an added bonus: no chance of wrinkles.

“You can actually wrap it up in a ball, throw it in the back of your seat of your car and kick it out two weeks later, shake it up and wear it and it will look perfect,” Castronovo said.

While he’s going to be mostly be wearing it around the rink, there is an inherent swagger that Lu carries alongside with the sleek modern look.

“It looks like he’s ready for Mortal Kombat,” Castronovo said with a laugh.

Lu’s past year has been one of personal challenges, which was part of the inspiration for doing something unique with his suit.

Following a hospitalization with a severe bout of COVID-19 that produced a pulmonary embolism in his lung, Lu’s younger sister passed away suddenly in October.

Lu said he’s recovered from the virus and after regaining his physical strength back he was “running” to book a vaccine appointment when eligible, receiving his second dosage last week.

“It really forced me to live in the moment and not think any further than the next day. I appreciate it that much more because of what I’ve gone through over the last eight months,” Lu said.

Additional challenges came while crafting the suit due to various COVID-19 shutdowns in both Quebec and Ontario, where Castronovo sources some of his material from. Lu received the suit last Saturday and was able to debut it the night of the Canadiens’ series-clinching win over the Winnipeg Jets.

“One of the things that I really appreciate about Pelle is that he is so detail oriented,” Lu said. “I really get caught up in the minutiae of that as well. He had to source and locate probably about half a dozen zippers because none of them were exactly correct. We were in constant communication about this, because it was the last piece of the puzzle that held up the final completion of the suit.”

Castronovo’s client list includes the cream of the crop when it comes to the Montreal hockey market: Canadiens owner Geoff Molson, general manager Marc Bergevin, and former team captain Max Pacioretty are just a few of the clients featured on his website’s testimonials page.

Castronovo has a tried-and-true method that Lu attested for. Before even beginning to crafti an outfit, Castronovo will make the trek out to his clients’ residence and get a sense of what it really is that makes an individual tick — everything from home décor, to where they grew up, to their day-to-day personality.

Lu made it clear though that being a Castronovo client isn’t just about meeting a tailor and taking your measurements.

“The way he builds wardrobes for his clients is unlike anything I’ve ever seen or encountered,” Lu said.

“What happened in the past year has propelled fashion 10 years ahead of us,” he added. “[When returning to work settings, people’s] shoes won’t feel as comfortable since their foot might have widened out. Women have, have lost their balance of high heels. Men don’t want to be restricted as much. They’re going to be asking more questions. Is there something better out there?”

Castronovo also described Montreal as the perfect city to experiment with new fashion ideas like Lu’s.

“They’re passionate people,” Castronovo said. “But never have I ever felt judged — in anything — to try anything new. I think that it’s important to be in a city where, at the end of the day… they’ll embrace it. They won’t come down on you for trying.”