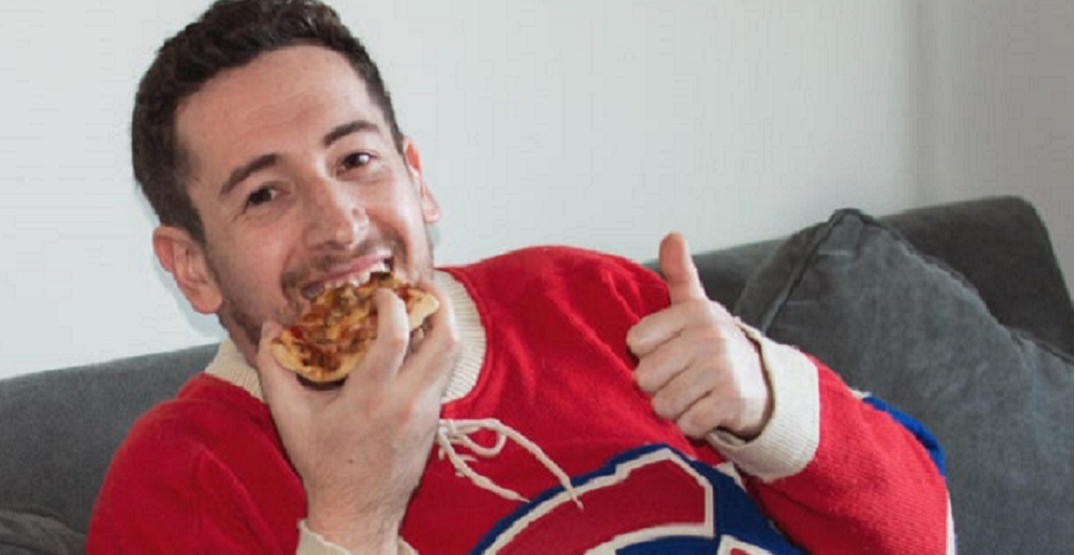 The Montreal Canadiens needed a good-luck charm when down 3-2 in their series to the Toronto Maple Leafs.

They’d pulled off a gutsy overtime win in Game 5 against the Leafs, but they needed to win both of the next two games to advance to the second round of the playoffs against the Winnipeg Jets.

Enter Josh Wahler, a 29-year-old Canadiens fan from Toronto who decided to simply order a pizza to calm his nerves for Game 6.

“I was pretty dejected [after Toronto went up 3-1 after Game 4], obviously,” he said. “It was going to be pretty tricky to take three games in a row off of the Leafs.”

After Montreal forced a Game 7, Wahler met up with a longtime friend — and fan of the rival Leafs — to watch the winner-take-all game together.

They’d watched Game 1 (a Montreal win) while sharing pizza together, but Wahler was hesitant about catching the final game of the series with someone cheering for the opponent.

“I was kind of like, I don’t know if I can stomach watching that with a Leafs fan,” Wahler said. “But he was like, c’mon, it’s a once-in-a-lifetime game.”

Wahler’s friend suggested pizza again, and he figured he’d keep quiet about his 2-0 record with the meal at the time.

Cue a 3-1 Game 7 victory for the Canadiens, and Wahler was suddenly all-in on his fortunate food choice.

So he decided it was time to share his story with a community of Habs fans, and see what they thought about it.

“I got pizza for games 1, 6 and 7, but did not get pizza for games two through five when we went 1-3,” Wahler’s first post about pizza on the Montreal Canadiens subreddit read prior to Game 1 against the Winnipeg Jets. “Should I keep this going?”

The post received upwards of 900 upvotes, with 214 comments as of right now.

You’ve probably figured out the rest of the story. Wahler has now ordered pizza six times in the playoffs, equaling six wins for the Canadiens.

It’s a simple nickname, but “Pizza Guy” has become a new rally mascot for the Reddit community, with both of the top two posts of the past 24 hours being Wahler’s pre-game and post-game pizza pictures.

Amongst a fanbase enjoying an unexpected postseason run after finishing fourth in the division, Wahler’s trying not to think too hard about anything beyond the next game at any given moment.

“I’m just trying to just live in the moment and enjoy it for what it is,” Wahler said. 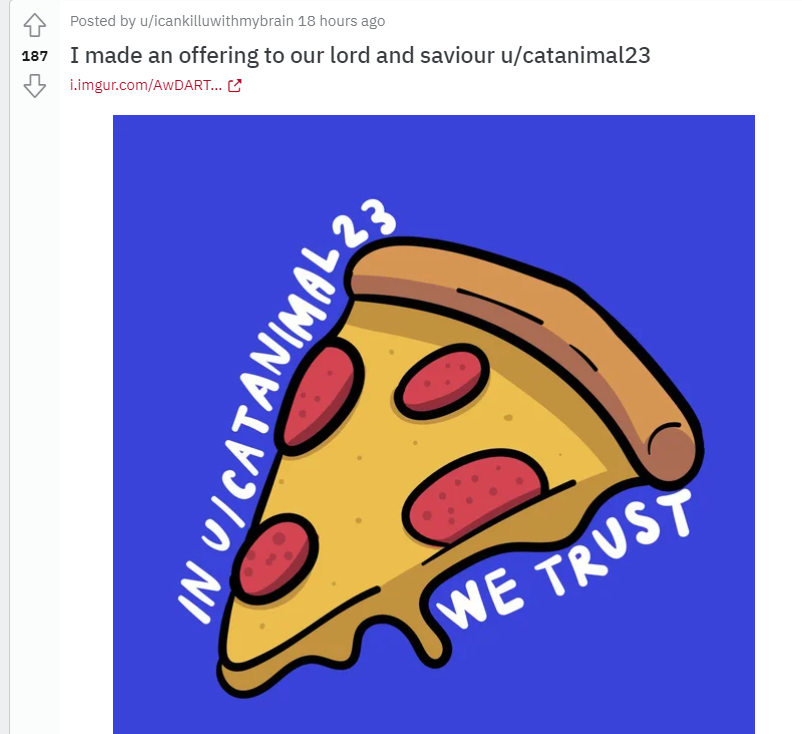 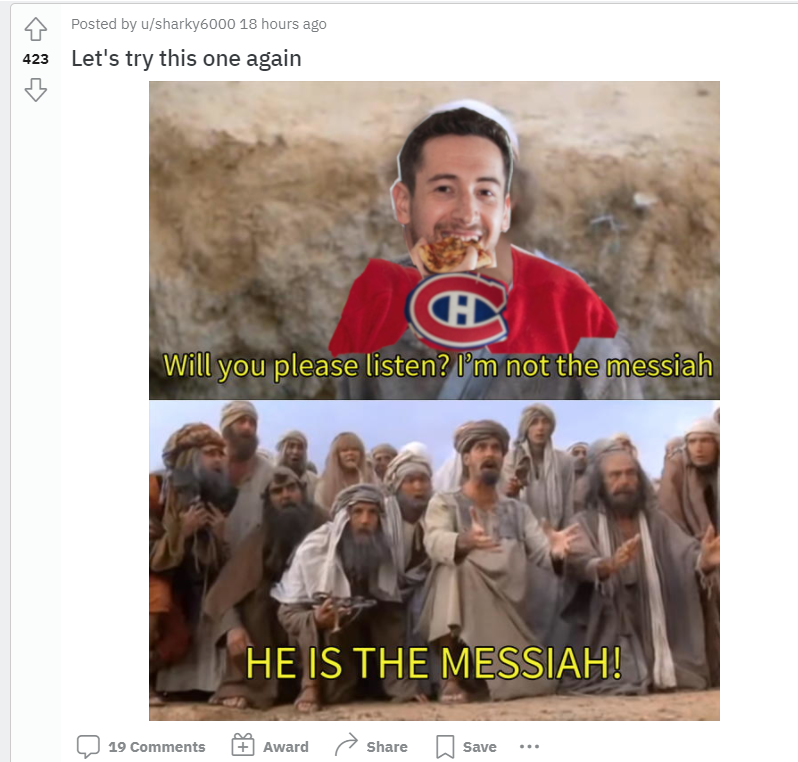 Montreal currently holds a 3-0 lead over Winnipeg in their second-round series, with a chance to sweep the Jets tonight.

Soaking it all in

Memes, messages thanking Wahler, and different threads about what toppings to get have quickly become a hot topic of conversation amongst Habs fans.

“Le gars qui mange de la pizza c’est le cœur de l’équipe, on est rien sans lui,” one comment read, translating to “The guy who eats pizza is the heart of the team, we are nothing without him.” 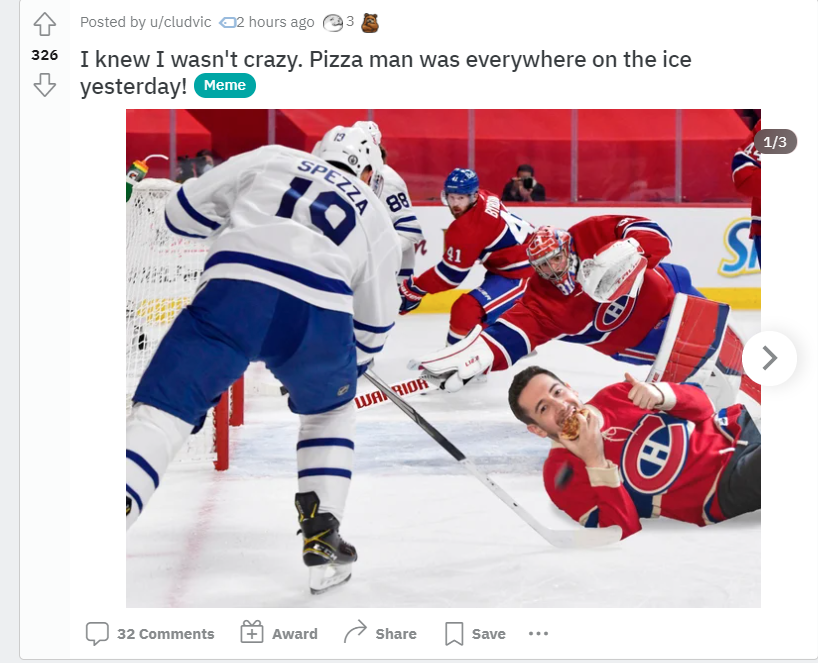 While his loyalties lie with the Habs and with pizza, Wahler’s mixed up where he’s ordered his meals from, including favourites in Maker Pizza and Descendant Pizza.

“We’ve figured out it’s just about the pizza, not about the toppings,” Wahler said. “It can be anything, as long as it’s pizza.”

Each subsequent post by Wahler (or others talking about him) has garnered hundreds of likes and comments, and the response has blown Wahler away.

“I’ve been a pretty heavy Reddit user for almost 10 years now,” Wahler said. “I’ve posted all the time, but I’ve never had anything blow up like this.”

Keeping it in the family

Born in Toronto, Wahler gets his Canadiens fandom from his parents, both of whom are originally from Montreal.

“It’s always been pretty, pretty tame and good natured,” Wahler said about having the majority of his friends be Leafs fans.”

He’ll be sharing a Maker Pizza pepperoni with his parents tonight as Montreal looks to sweep Winnipeg and earn their first semi-final trip since 2014.

If Montreal doesn’t win tonight, Wahler said he’ll leave it up to the Reddit hivemind to decide what to do with his dinner superstition.

“I’ll throw it to the subreddit and kind of let everybody chime in,” Wahler said. “I think it’s kind of become a collective thing in that community. We’re all part of it and we’re all having fun with it. I’ll see if we save it for something like when we’re in an elimination game and need it. I think the boys can close it out tonight, but we’ll see what happens.”