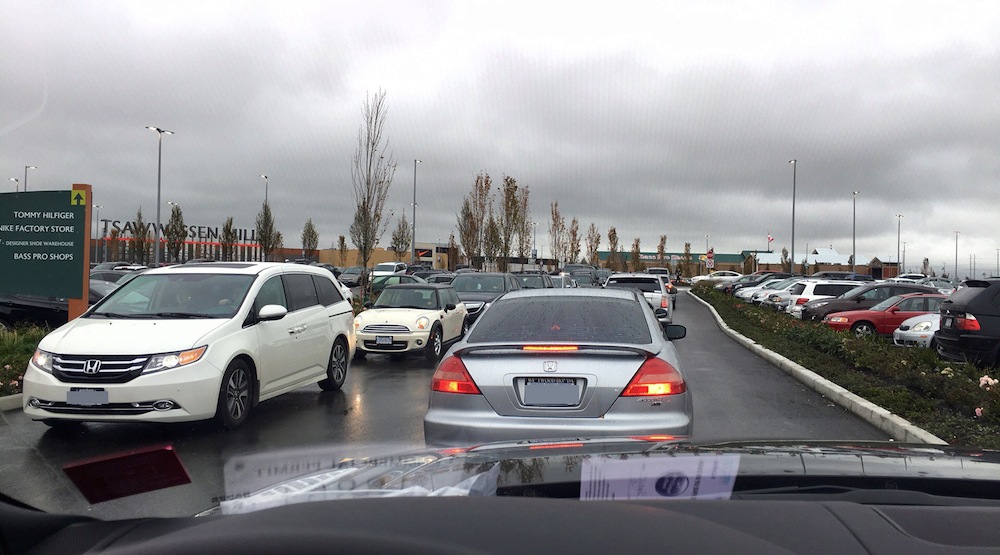 The parking lot traffic at Tsawwassen Mills was at a complete standstill for much of Saturday, to the extent that drivers were stuck in their cars for up to four hours trying to get out of the shopping centre’s exits.

Angry shoppers waited for so long that some gave up on following traffic and made their own make-shift exits by driving on the grass and flower beds to get out of the mall. Among the many comments posted on social media, some even claimed that they were running out of gas waiting in the gridlock.

“Fed up mall patrons who were making even less progress than those in my surrounding area began driving over grass medians to travel their desired distance,” Vanessa Obeng, who visited the mall today, told Daily Hive. “The rules of the road meant nothing as frustrated drivers became aggressive with one another.”

“[They were] making dangerous turns and even leaving their vehicles to have verbal altercations. I even witnessed a man illegally park along Highway 17 and run to switch places with a loved one who was trapped in the line  just ahead of us.”

The traffic mayhem continued despite the assistance of Delta Police, RCMP, extra traffic controllers at the exits, and parking aids roaming through the parking lot area.

“I will never be back”

Kelly Kerr told Daily Hive that she drove into the parking lot just after noon after about 20 minutes of waiting, but when she realized it was too busy she decided to stay in her car and leave without stepping through the mall’s doors.

The 6,000-car capacity parking lot was so congested that there was a one-hour period when her vehicle only moved about 10 feet.

By the time she escaped the parking lot, it was approximately 4 pm and there was still a two-kilometre-long line of vehicles on Highway 17 trying to get through one of the shopping centre’s two entrances.

“There were ‘parking aids’ walking around but not doing anything,” said Kerr. “We asked one of them how to get out and they just kind of shrugged and said there are only two exits and that we were pretty much in the middle.”

“There were hundreds of cars from every row trying to merge into the one outgoing lane so no one was moving,” she said.

She said she posted a message on Tsawwassen Mills’ Facebook page alerting others to avoid the mall today, but their social media team allegedly deleted her post.

“I guess they preferred to have people wasting their whole Saturday afternoon stuck in their parking lot,” continued Kerr. “I will never be back.”

“This can’t be legal”

Daily Hive Food Editor Lindsay William-Ross said she got into her car shortly before 3 pm and was able to leave mall property at approximately 5 pm.

“People were getting out of their cars to either see what was wrong, smoke, or just plain yell at drivers who they felt should move,” said William-Ross.

“It felt quite dangerous, because clearly no emergency vehicle could get through. It took me 2 hours to exit, and as I neared the exit I couldn’t figure out why we were stuck because it was moving in that area rapidly. This was a planning and execution fail.”

As SkyTrain is nowhere near Tsawwassen Mills and transit bus services are poor, most visitors will likely be driving their own car to get to and from the 1.2-million-square-foot, 200-store destination shopping centre.

However, there is a mall-operated 42-passenger shuttle, using a school bus, that enables foot traffic ferry passengers at Tsawwassen Ferry Terminal to visit the mall. The free shuttle operates hourly during mall operating hours and is timed with Nanaimo and Swartz Bay ferry sailing times.

Mall operators are also operating an employee-only shuttle to and from SkyTrain’s Scott Road Station after the shopping centre experienced some difficulty with attracting employees due to its far-flung location.

Traffic conditions at Tsawwassen Mills should improve after the mall’s Thanksgiving long weekend opening period. BC Ferries has warned passengers to expect extra traffic as Highway 17 is the only way in and out of Tsawwassen Ferry Terminal and the new mall.

Prior to the mall’s scheduled opening on Wednesday, a span of the highway route leading to Highway 99 was already widened from four to six lanes to accommodate the increase in traffic volumes. Improvements were also made to traffic signals earlier this year.

All upgrades to local road infrastructure were paid for by the mall developer.

@AM730Traffic #tsawwassenMills even the shuttle bus can’t get through! pic.twitter.com/c9vpJ4Mt8w

@tsawwassenmills Major fail. Coming up on 3 hours to get out of your parking lot. Never again.

@TsawwassenMills Stuck for 2 hours. The mall needs more exits and the traffic control people need to learn how to control traffic! 😵

@TsawwassenMills Now at 2.5 hours. Will run out of gas and faint soon. #sendfood

Avoid @TsawwassenMills if you have little patience or high blood pressure

@TsawwassenMills entering and exiting this place is a nightmare. Seems like poor planning.

This is how long it took to exit the parking lot @TsawwassenMills. Not loving everything about it. #hangry pic.twitter.com/SkwJf7SqZz

@TsawwassenMills I’m no engineer, but I’m sure entrances should equal exits not only for convenience but safety

People are getting so frustrated @TsawwassenMills they’re driving over grass medians to get away from the traffic. Bad news, it’s everywhere

Experiencing Tsawwassen Mills for the first time. I have an overwhelming feeling of the Target Canada scenario reproducing. #vancouver

@NEWS1130Traffic been stuck in the Tsawwassen Mills parking lot for over 39 mins and haven’t moved… this place is a traffic nightmare!!

@TsawwassenMills do you have a plan for traffic craziness in parking lot right now?! We’re here in car with kids for last 1 hour!!!

Traffic chaos between Ladner and Tsawassen … Thanks @TsawwassenMills and @TsawwassenFN …much appreciated! Great planning…

@TsawwassenMills HELP trapped in grid lock in parking lot for over an hour, nobody is moving. Please have someone, anyone direct. Send h2o

@TsawwassenMills Why do you have no one directing traffic in the lots? No one can leave. Been trying to exit for an hour.

@TsawwassenMills Took me 2hrs to exit. Police/RCMP at perimeters/hwy a non issue. In your actual lot we were gridlocked for hours.

At least I won’t have to deal the @TsawwassenMills parking lot. Anyone abandon their car in an effort to leave?

@TsawwassenMills terrible traffic design for your exits. Been stuck trying to get out of your lot for 15 min and counting and going nowhere

Who ever designed parking lot should be hung from street light. Go to Richmond u will be quicker even from delta #TsawwassenMills

45 mins to get out of #Tsawwassen Mills parking lot!!! Parking lot design failure!

Parked in the tunnel. Thanks #tsawwassenmills