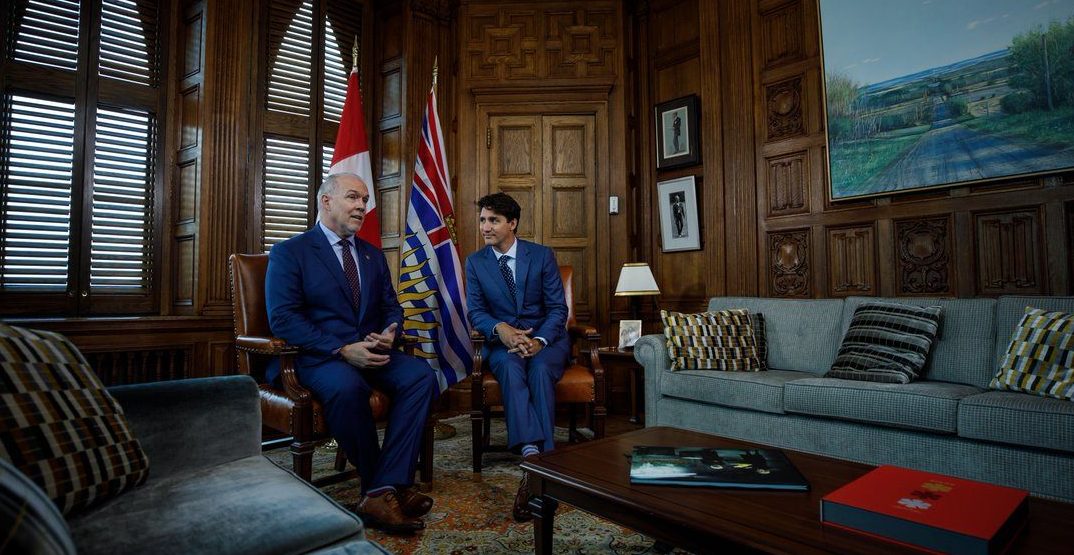 A power-hungry political leader plunges voters into an early election in hopes of turning his minority government into a super majority while the public is distracted with the pandemic and before a rising new wave of COVID-19 cases crashes down and ruins his window of opportunity.

For BC voters, this is a familiar story.

The similarities between the two elections are striking. And it’s clear Trudeau has taken the lessons Horgan learned to heart, using them to help gauge the risk and reward of calling an election more than two years before the next scheduled date.

For Horgan, it worked masterfully.

The BC NDP picked up 16 seats in October, securing one the strongest majorities in its history and decimating its chief rival, the BC Liberals.

Trudeau is looking to do the same with his minority government.

Here’s some of the strategies the federal Liberals learned from the provincial NDP.

The top lesson Trudeau took from BC’s experience is that voters might get mad at an early election call – but they get over it. Quite quickly too.

Horgan faced a surge of anger when he called the election Sept. 21, 2020. BC was just starting its second wave, with cases rising in schools, hospitalizations increasing and medical experts pleading for personal vigilance to keep things from spiralling out of control. Plus, he was breaking a deal made with the BC Greens in which he’d explicitly promised not to call an early vote.

Critics, including some former allies, lined up to pepper Horgan with a thesaurus worth of adjectives on his decision: Selfish. Reckless. Dangerous. Foolish. Untrustworthy.

Horgan took it squarely in the face for the entire first week of the campaign, from a Monday launch through to the weekend.

And then it all just kind of dissipated.

Turns out, being angry for a long time is hard work.

Voters vented, and then shrugged and went on with their lives. Media could only file so many stories about anger over an early election call, and moved on to issues like the novelty of running virtual campaigns, party platforms, local candidates and other emerging controversies.

In short: The anger over an early election was short-lived. It impacted fewer than one third of BC’s campaign.

Senior federal Liberal strategists I’ve talked to expect the same thing: A few days of outrage that by and large don’t translate into any sort of lasting punishment at the polls.

COVID is the ballot box question

You’d be hard-pressed to name a single promise made in BC’s 2020 election campaign that moved the dial amongst voters. Because it turns out that when you run an election during the most frightening health crisis of our time, the main issue that voters actually cast their ballot on is: Should we keep doing what we’re doing to fight this frightening crisis?

BC New Democrat strategists correctly calculated that no other issues could penetrate the fog of public anxiety and preoccupation about COVID-19. Trudeau Liberals expect the same.

That means the election could be more like a referendum on the government’s handling of COVID so far. By and large, people in BC thought it was reasonable. Or, they weren’t upset enough to justify making a dramatic change in leadership during a crisis.

He’s already singing from Horgan’s playbook in this area – offering voters an early “choice” for the future, while secretly hoping the ballot box issue boils down to a paralyzing fear over the present.

Horgan in October 2020: “I believe, as we’re going in to the recovery phase and making sure that everyone’s safe, we should ask British Columbians what they think and where they want to go.”

Trudeau in August 2021: “We will be taking decisions that will last not just for the coming months but for the coming decades. Canadians deserve their say. That’s exactly what we’re going to give them.”

Apathy is good for the incumbent

When the dust settled in BC’s pandemic election, only 53.9 per cent of registered voters bothered to cast ballots – the lowest voter turnout since Elections BC started keeping records in 1928.

People appeared largely preoccupied with more important things – making sure their families were safe during the crisis and navigating rising unemployment as businesses closed, to name a few.

Here too the federal Liberals see an opportunity.

Low voter participation most often benefits incumbent governments, allowing them to maintain or increase their hold on power in the absence of any upswell movement for change.

It used to be that politicians were roasted for making expensive promises during election campaigns that they couldn’t explain how they’d pay for.

But COVID-19 threw fiscal prudence out the window for the last 18 months and into the conceivable future, as the public leaned on provincial and federal governments for financial assistance.

Horgan blew through the 2020 campaign without having to answer for how long he’d table deficit budgets, and Trudeau is doing the same. Even the federal Conservatives, which try to portray themselves as more responsible stewards of the public purse, had admitted he’d take 10 years to balance the books.

While voters might not care about deficit and debt management (for now), they do still care about their own pocketbooks.

Affordability promises for $10-a-day child care and housing remained key to the B.C. NDP’s electoral success in 2017 in Metro Vancouver, and were largely repeated by Horgan during his 2020 campaign.

Trudeau saw the orange wave that rolled through Metro Vancouver under Horgan’s leadership and showed up just last month to promise his own version of $10-a-day childcare in Vancouver, as well as push forward SkyTrain through Surrey to Langley and repeat promises to tackle housing affordability — all popular items borrowed from the plate of the provincial NDP premier.

BC’s experience likely gives Trudeau more confidence he can turn his risky gamble into an electoral windfall. But it’s not ironclad, by any means.

That result shatters the idea that pandemic elections are a shoe-in for the incumbent party, and might indicate a change in voter sentiment since B.C.’s election in October. It’s hard to tell with Nova Scotia though, given it’s far fewer number of seats than in B.C. or federally.

Nonetheless, all the federal parties will be sifting through that campaign for clues, just as they sifted through Horgan’s victory in BC for strategies as well.