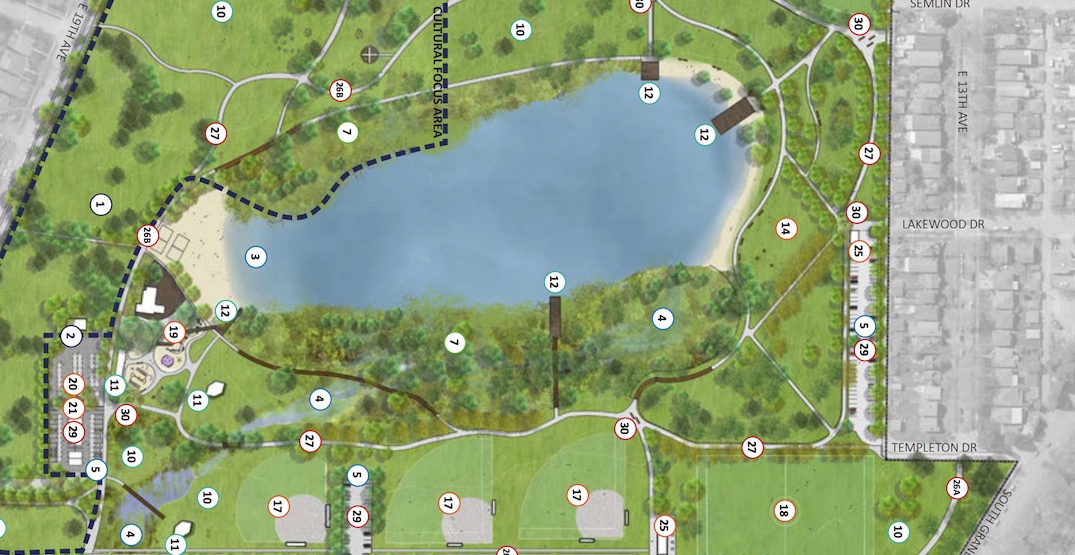 After a public consultation and planning process that spanned nearly a decade, the Vancouver Park Board has green lighted a finalized master plan to renew and improve Trout Lake Park, formally known as John Hendry Park.

Park board commissioners unanimously approved the master plan approach and design in a public meeting on Monday evening.

According to park board staff, Trout Lake Park sees about 750,000 visitors each year for recreational activities and cultural events. The park spans an area of 67 acres, with the 10-acre freshwater lake as its centrepiece.

Significant attention was given to addressing the lake’s poor water quality in the master plan and during the deliberations.

Commissioners passed an amendment calling on park board staff to implement a plan to prioritize water quality improvements to ensure safe swimming, with a goal to eliminate public swimming closures as a result of unsafe e-coli bacteria levels, which typically occurs during warm weather.

Trout Lake was previously continuously replenished with new fresh water from creeks entering the water body, which enhanced water circulation, and kept water conditions clean and healthy. But over time, from East Vancouver’s urbanization, the creek connections were buried and lost, and the water and ecological conditions deteriorated.

Park board staff have noted that the lake has been regularly closed to swimming during summer months since the 1960s.

The existing practice of pumping millions of litres of chlorinated drinking water into the lake each year has also been ineffective in improving water quality, and has impacted the water body’s ecology. 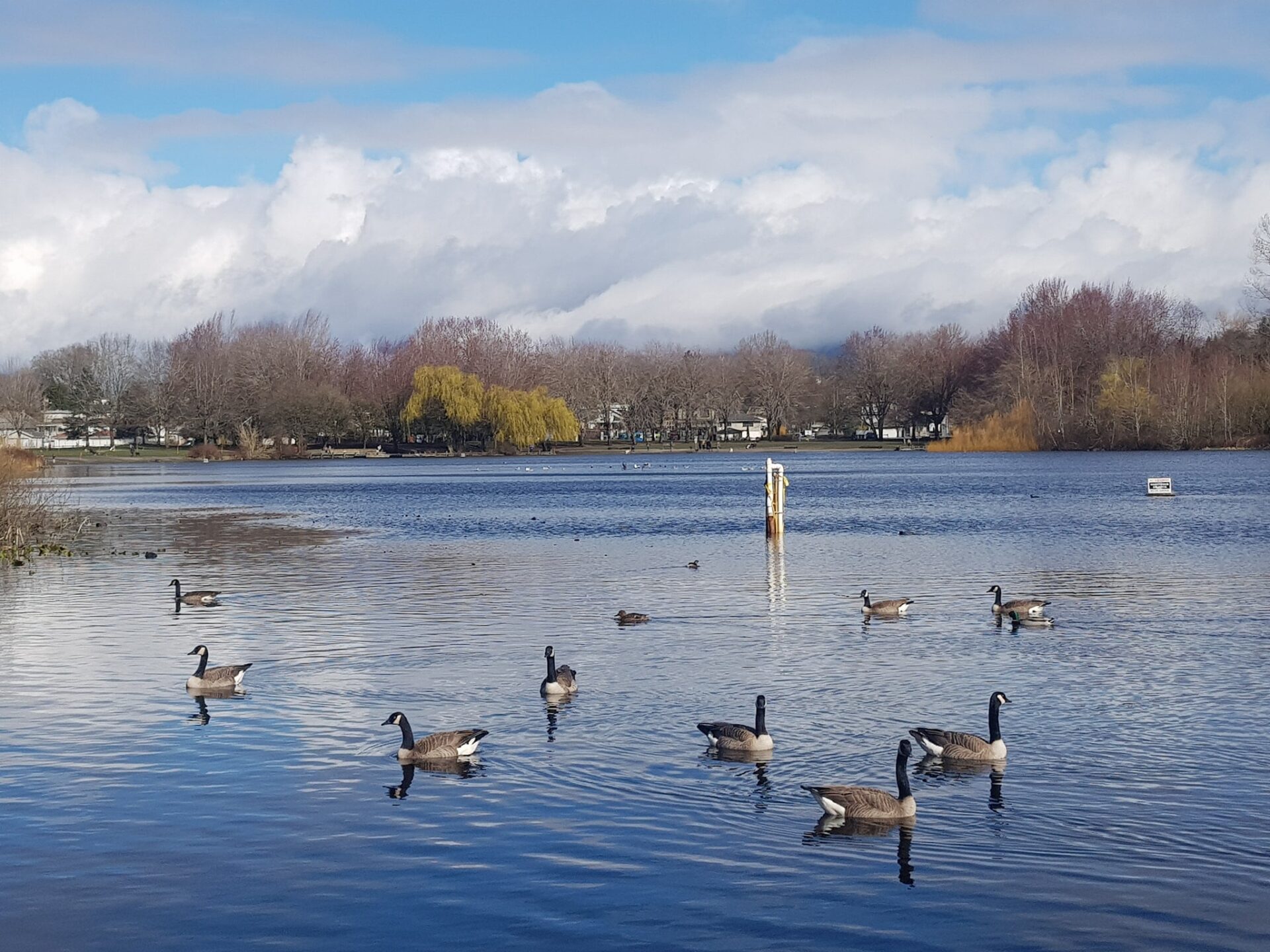 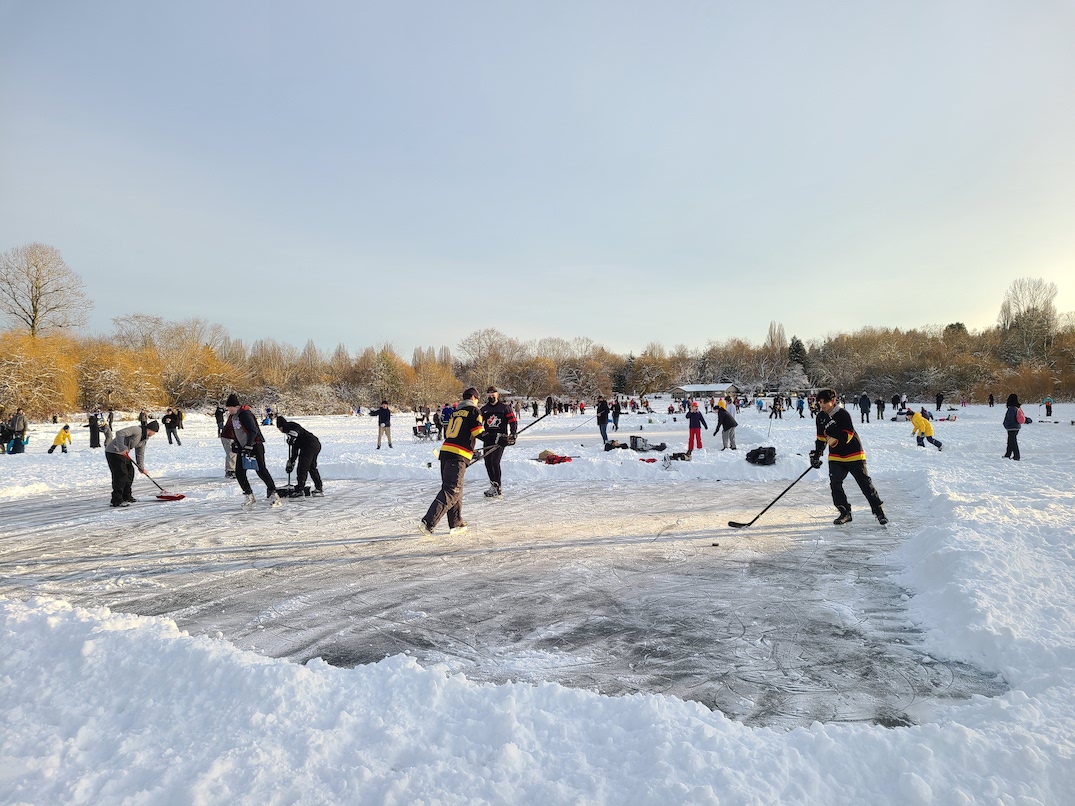 Moving forward, the park board will look to using natural ecologically-based solutions to improve water quality and enhance aquatic habitat. This includes redirecting rainwater runoff from the park to the lake instead of into the sewers, restoring bog and wetlands at the lake’s edges, reducing and eventually eliminating the practice of pumping drinking water to replenish water levels, and reducing the volume of goose droppings on the lakeside.

Previous studies and assessments determined that birds are the greatest source of water pollution.

Other measures to return the tradition of swimming in the lake include installing a water curtain or barrier to focus water treatment efforts, as well as dredging or placing a liner on the lake bottom of the swimming area. As an additional measure, filtration or even UV treatment of water in the separated swimming area could be considered.

New boardwalks and lake lookout areas will be added, along with an overall improved south beach area with a new playground, water play feature, a plaza for food trucks, and beach volleyball courts.

Existing primary pedestrian pathways will see pavement, lighting, drainage, wayfinding signage, and seating upgrades, and secondary pathways will be further enhanced. Cycling connections will also be improved, including a realignment of the BC Parkway Trail on the park’s eastern edge to reduce conflicts with other park users, a new multi-use pathway between the BC Parkway and the East 14th Avenue bike route, and potentially new bike lanes on East 19th Avenue and Victoria Drive. 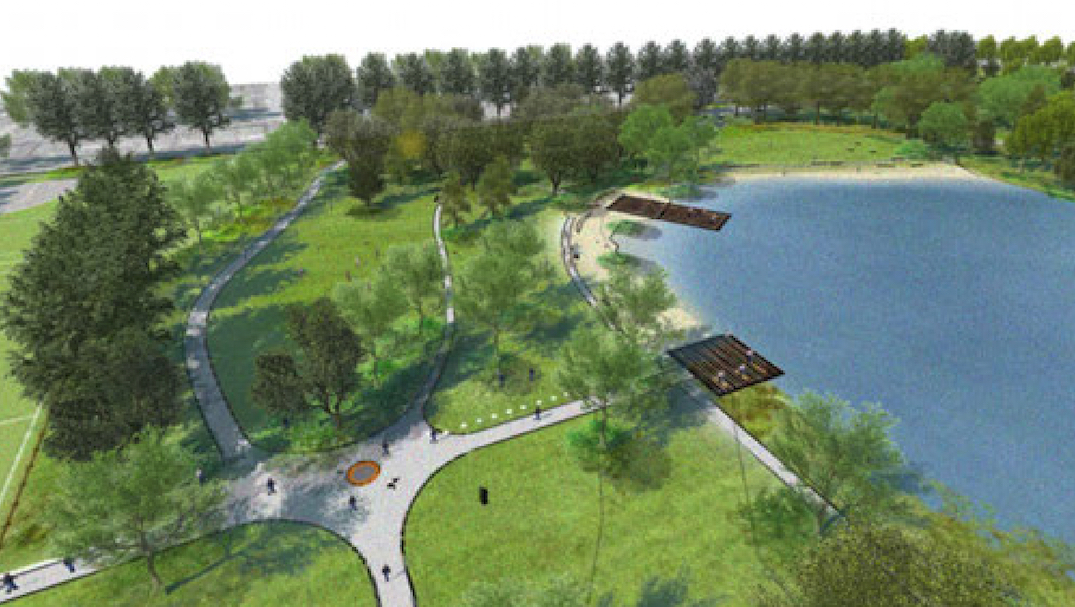 Next to the existing Trout Lake Community Centre, a community plaza will be added next to the building, and the existing outdoor sports courts cluster will be improved and expanded, including two additional multi-courts and one additional basketball court. Various playing fields in the park will also see reconfigurations, expansions, and upgrades for improved and durable use.

Next to the north side of the lake, the existing dog off-leash area — the largest in Vancouver — will have its boundaries defined, along with potential dedicated areas for smaller and shyer dogs, and new amenities such as a dog wash station.

At the south side of the park, a 10-acre area will be turned into a “Cultural Focus Area” that showcases Indigenous cultures and provides functional event-friendly spaces.

This includes an Indigenous celebration facility featuring a covered open or semi-enclosed structure, power and lighting infrastructure for events and cultural displays, Indigenous public art, equipment storage space, and benches and other amenities. The existing south beach building in this area will see upgraded public washroom and concession facilities.

A new additional public washroom building is being eyed for the north parking lot.

Cost of over $20 million

The master plan’s various components and features carry an estimated combined total construction and installation cost of over $20 million, spanning over several capital budget cycles. The aim is to implement the vast majority of the master plan within the first 10 years following approval, but this will require further approvals by both park board commissioners and Vancouver City Council.

There is currently $1.4 million available in the current capital budget to take on the short-term components in the master plan. 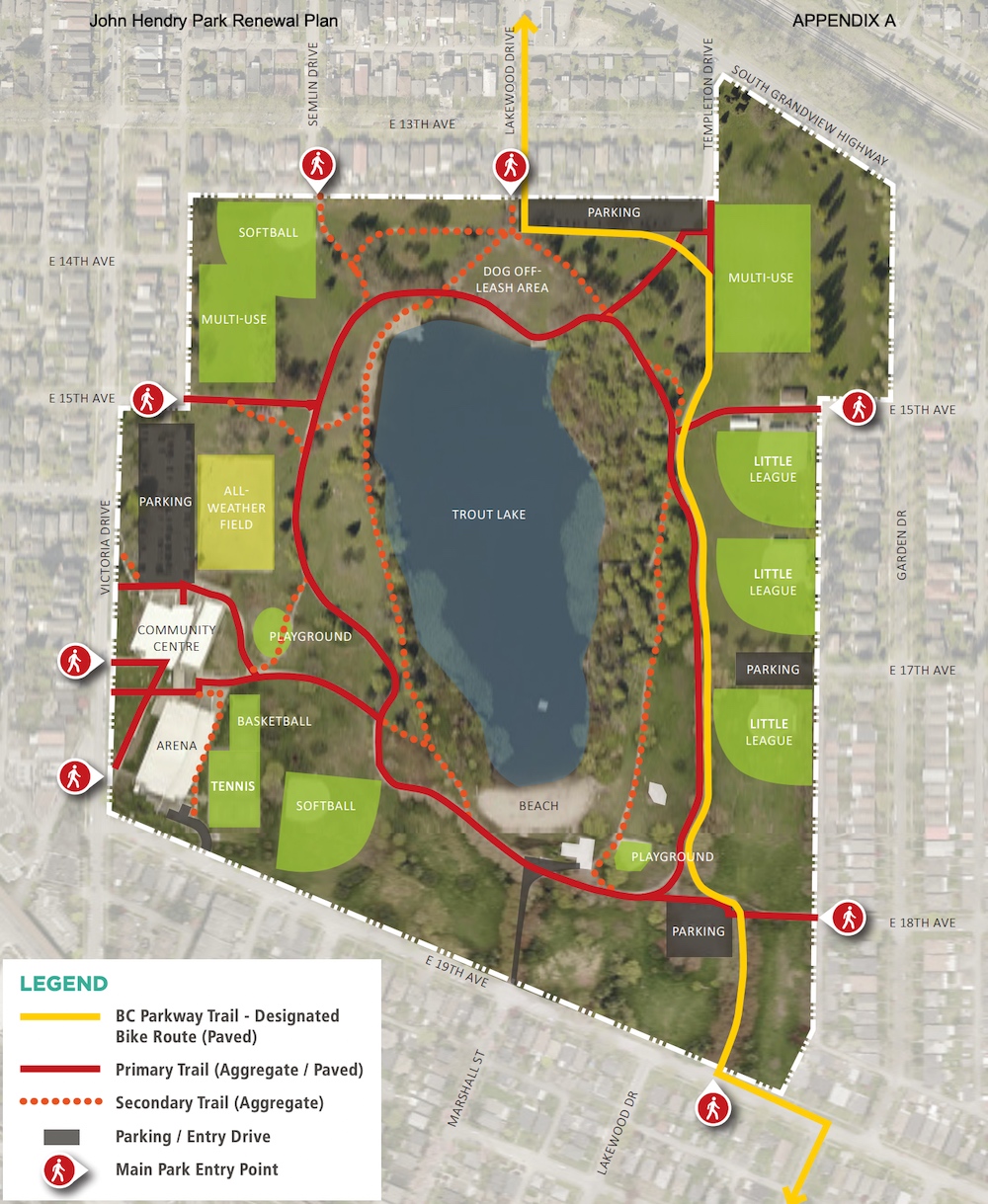 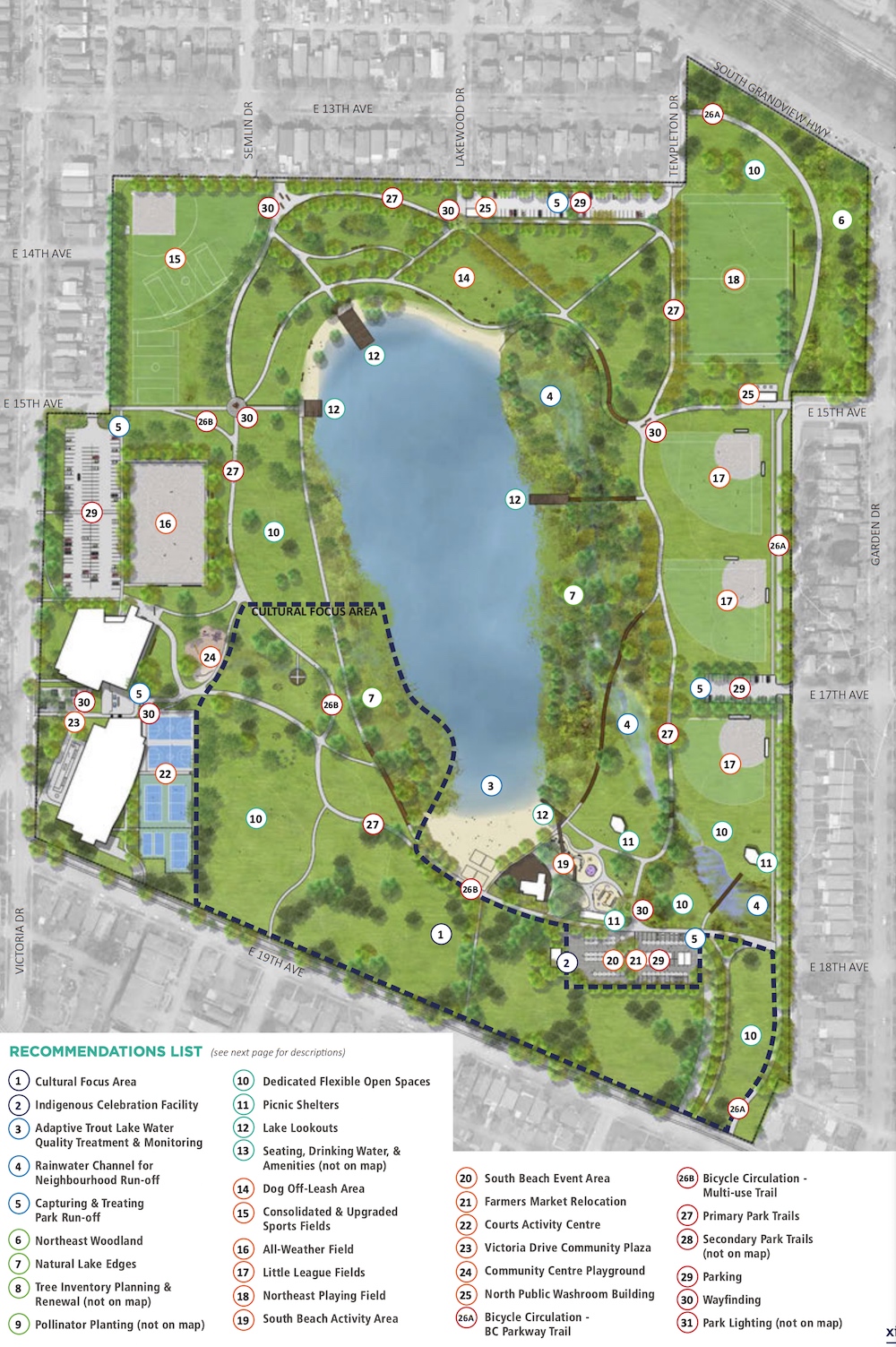 Future configuration of John Hendry Park (Trout Lake Park). Click on the map for an expanded version. (Vancouver Park Board)