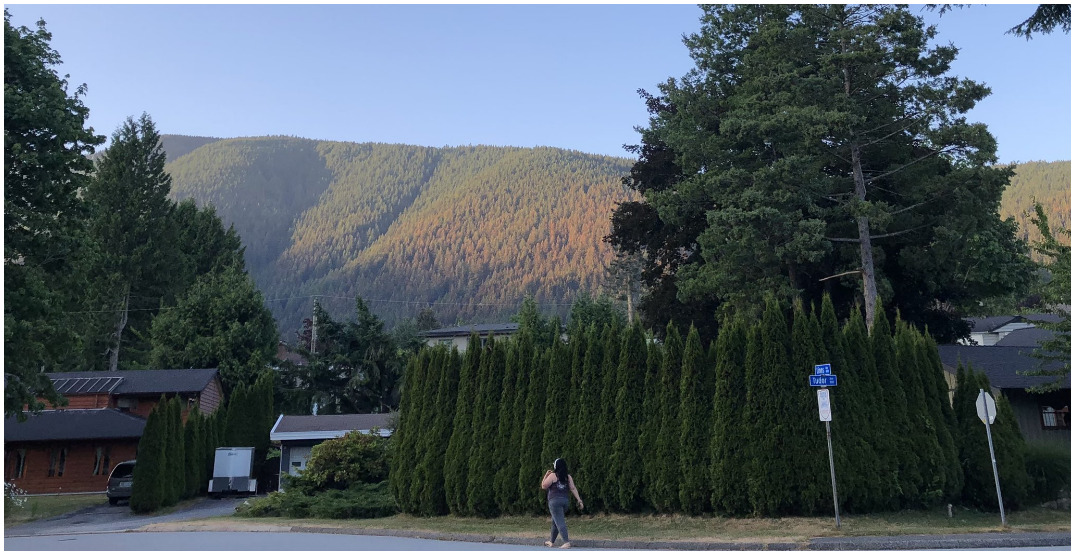 If you’ve got a view of the trees on Grouse Mountain, odds are they might look a little different from usual. The typically vibrant pine green colours have faded for a large patch of the trees, instead presenting more brown or red.

This has caused alarm for some residents in the area, who are reporting that they’ve never seen the trees in this condition before.

There are a number of factors that are believed to be contributing to this discolouration.

Looper Moths have been known to have a negative impact on forests. In the fall of 2020, a Looper Moth outbreak essentially took over BC. Outbreaks of this species of moth can run anywhere from three to four years long, with 2021 being the third year of the outbreak.

These moths feed on various trees, including Douglas Fir, Western Hemlock, and Spruce.

Speaking to Daily Hive last year, the District of North Vancouver (DNV) suggested that this was an important process in the overall health of forests, which allows younger trees to flourish, and is also crucial for the recycling of nutrients.

However, there is something else that is adversely impacting the trees on Grouse Mountain and in the province and country at large.

Heat stress has compounded the impact of the Looper Moths, further degrading the state of the forest.

DNV councillor Mathew Bond confirmed this to be true on Twitter.

It is not yet known what the long-term impact may be, or what actions the DNV plans to take to protect the trees.

According to a study from the National Institute for Climate Change Research (NICCR), extreme heat can take a toll on plant life, including trees.

The study suggests that drought and excessive heat led to widespread heat mortality in the United States.

“Although tree mortality is hard to project, it is expected to continue to increase with continued climate change, particularly in areas where extreme weather events, such as severe drought, become more frequent,” says the study. “Increased tree mortality has impacts on forest ecosystem functioning, timber supply and carbon balance.”

The DNV provided a statement to Daily Hive.

“Like many jurisdictions in the region we are dealing with the impact of the hemlock looper moth. This outbreak, which began two years ago, resulted in damage to some trees in our forested areas. We believe the heat dome that we experienced last week further affected some trees already in decline due to the looper moth. Though there are no immediate measures we can take to control the outbreak, we are working with Metro Vancouver and the Province to assess the damage to our forests and determine potential next steps. ”