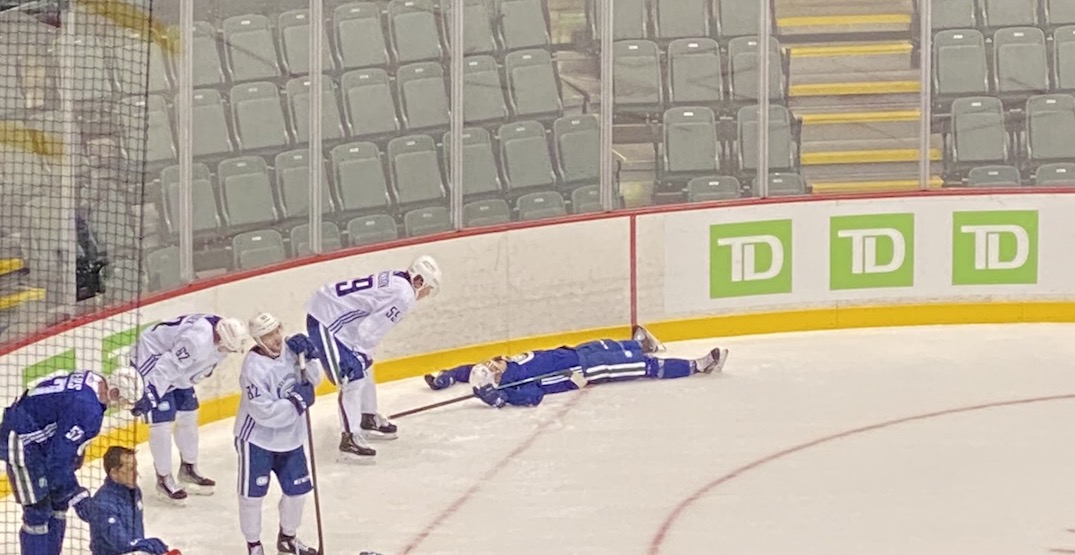 Oliver Ekman-Larsson struggled to keep up. Olli Juolevi lay motionless on the ice, and it wasn’t clear that he was going to get back up.

Travis Green’s famed bag skate really did live up to the hype, as the Vancouver Canucks hit the ice for the first time this season in Abbotsford.

“There’s a skating test at the end,” Green explained, in what was certainly a huge understatement.

For the uninformed, a bag skate is an endurance drill, involving skating back and forth across the ice. A lot of coaches employ it, but Green’s bag skate is extra notorious.

“It was a classic Travis Green training camp,” said Canucks captain Bo Horvat, who has been through this plenty of times before. “It’s never going to be easy and I think it’s great for us right off the bat to get going right away.”

Juolevi was in such rough shape, that J.T. Miller skated by and asked him if he was alright, or just tired.

We’ll assume that the Arizona Coyotes don’t have the same “skating test,” because Ekman-Larsson and Garland struggled mightily.

Ekman-Larsson consistently lagged behind in his group, but he had a smile on his face by the time he met the media.

“It was a tough one. We knew that coming in, right?” said Ekman-Larsson. “But it was a good practice, it was a good pace, and the guys were working really hard. That’s all we were looking for. Good start.”

On the flip side, players like Nils Hoglander, Will Lockwood, and Phil Di Giuseppe excelled in the skate, leading their respective groups by wide margins.

“We do [the bag skate] for a reason,” Green explained. “It’s a tough skate… I think new players struggle with it a little bit more just because they haven’t done it. Guys that have been here, they know what’s coming. I’ve seen the skate done a lot of times, so you learn a lot about what a guy’s done over the summer to get ready, especially if they know that it’s coming.”

Another newcomer, Jason Dickinson, explained that part of the difficulty of Green’s bag skate is that it comes at the end of an already high-tempo practice. Indeed, each group that hit the ice today practiced for about an hour and a half, before getting some rest while the ice got resurfaced. Then it’s 15 minutes of hard skating, back and forth.

Fans on hand quietly observed practice for the most part, but gave a nice cheer for both groups at the tail end of the gruelling skates.

“Day 1 is always going to be tough,” said Zack MacEwen. “That’s why you put in the work in the offseason, so you come in and you’re ready to go. A lot of guys will be happy to have that one done with.”