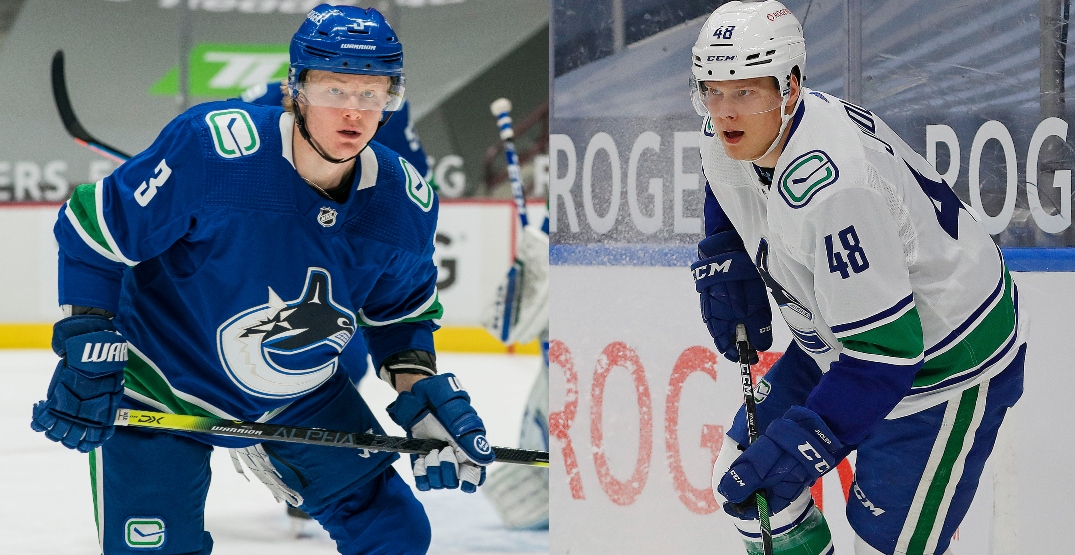 As the Vancouver Canucks enter a pivotal fifth season under Travis Green and the eighth season under Jim Benning, there are many unanswered questions.

The fact that Elias Pettersson and Quinn Hughes remain unsigned looms large over training camp, although signing high-profile restricted free agents at the last minute is nothing new for Benning. Bo Horvat got his extension just days before training camp in 2017, and Brock Boeser signed on the day of the Canucks first preseason game in 2019.

For the purpose of this article, let’s assume that Pettersson and Hughes are in the line-up for opening night.

With the Canucks two superstars penciled in, here are six training camp battles to watch for, as on-ice sessions begin in Abbotsford on Thursday.

While there might be a temptation to try Conor Garland alongside Pettersson, the fact that Boeser and Pettersson have shown great chemistry over the last couple of seasons should firmly put the Canucks newcomer to the second line.

The easy choice here is to put JT Miller back on the top unit to reunite “The Lotto Line.” However, Hoglander was one of the Canucks best forwards last year, leading the team in even-strength points over the latter half of the season. He also had a +7 even-strength goal differential while playing with Boeser, whereas Boeser and Miller were -9 together last year.

Prediction: Hoglander surprises once again at camp, and begins the season on the top-line with Pettersson and Boeser.

For the first time in his NHL career, Horvat could begin the season with two bonafide top-six wingers.

Heck, he could even end up with two top-line calibre forwards.

While not a lock, Garland will likely get an immediate chance to line up beside Horvat as the second-line right-winger. That leaves Miller, Hoglander, Tanner Pearson, and Vasily Podkolzin to battle for a spot.

If we’re handicapping this battle, it’s likely between Miller and Hoglander, with Pearson and Podkolzin having an outside chance of playing on the second-line.

While Pearson’s the incumbent, his production suggest that he’s better suited for a bottom-six role. Podkolzin is a wild-card, but he projects to have more defensive poise than your average rookie. He’s also played right wing the past couple seasons over in Russia, so there’s a good chance that the coaching staff decides to keep him where he’s comfortable.

Prediction: Putting Hoglander on the top line and Miller on the second line would really help spread out the offence, while giving Horvat two quality top-line forwards to play with for the first time in his career.

With Tyler Motte doubtful to begin the regular season, there are now two open spots on the Canucks bottom line alongside fourth-line centre Brandon Sutter.

Matthew Highmore should be considered the front-runner for a spot after averaging more than 15 minutes per game last season, including 2:01 per game shorthanded. Phillip Di Guiseppe is a strong candidate to play on the fourth line, with over 200 NHL games on his resume.

Zack MacEwen has proved doubters wrong his whole career, but he’s on the outside looking in after struggling last season.

While there’s intrigue among every player listed above, the forward to watch is Will Lockwood. The Canucks’ 2016 third-rounder improved drastically late last season in the AHL. He brings speed, a high motor, and he was one of Utica’s top penalty killers. One thing working against Lockwood is that he makes nearly $100,000 more at the NHL level compared to most of the Canucks’ other depth options. He’d have to blow the doors off at camp to make the team.

Prediction: Highmore keeps his job and Lockwood has another impressive training camp, earning a spot on the fourth line. Since he’s waiver exempt, he can easily be sent down to the AHL once Tyler Motte is healthy.

Unfortunately for the Canucks, neither Tyler Myers nor Tucker Poolman look like a seamless fit beside Oliver Ekman-Larsson on a shutdown pair. Myers was brutal defensively last season, and Poolman wasn’t much better in a similar role alongside Josh Morrissey.

Prediction: Myers will be playing top-four minutes for the Canucks. While Poolman might be a better fit statistically, the best guess is that Myers gets the first chance to play with OEL.

Simply put, Jack Rathbone is the best player among these three choices. That doesn’t mean he’ll begin the season in the NHL .

It’s easy to envision a scenario where Olli Juolevi might have a leg up due to his league-minimum salary, penalty killing ability (neither Hughes nor Rathbone project as penalty killers on the left side) and waiver status. Hunt, meanwhile, hasn’t been in the AHL since 2016, so you can’t count him out either.

Prediction: Benning likely doesn’t want to risk losing the 2016 fifth overall pick on waivers. Chances are that Juolevi begins the season in a third-pair, secondary penalty killing role, while Rathbone gets top-pairing minutes in Abbotsford.

If Juolevi makes the Canucks’ opening night line-up and Rathbone goes to the minors, then the spare defencemen projections are simple: Hunt and Luke Schenn will sit in the press box as spare defencemen on the left and right side respectively.

At forward, if Highmore and Lockwood make the team, Di Guiseppe is the best bet to stick around as the 13th forward based on his successful experience at the NHL level.

Here’s what the Canucks opening night roster would look like based on these projections.