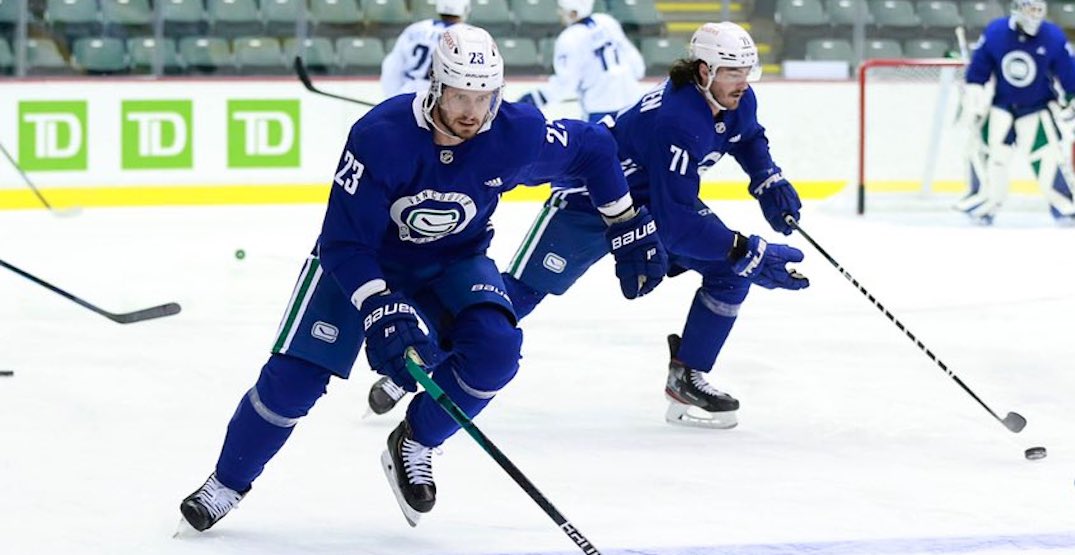 There are a few traditions that come with training camp.

1. Optimism is plentiful from Vancouver Canucks players, coaches, and fans.

3. The media read way too much into the first-day line combinations.

I’m not one to break tradition, so let’s dive into some of the line combos and defence pairs that Green rolled out at the first day of on-ice sessions at the Abbotsford Centre.

Training camp line combinations don’t always mean much, but there are nuggets to be found. Take last season, for example, when Nils Hoglander started on a line with Bo Horvat and Tanner Pearson. That’s a line that started the regular season together.

The main thing that stuck out about the way Group A lined up on Thursday was the top defence pairing featuring newcomers Oliver Ekman-Larsson and Tucker Poolman. It’s a duo that could conceivably start the season as Vancouver’s shutdown pair.

That would be a huge assignment for Poolman, who played top-four minutes on Winnipeg’s blue line last season.

“I just try to play a steady game,” Poolman said. “I’ve just found that if you can try to be predictable and have your game the same every day, [your partners] can excel better because they know what to expect out of you, and they don’t have to think and worry about what you’re doing.”

The other thing to note was Tanner Pearson started on Bo Horvat’s line, instead of players like Conor Garland, Vasily Podkolzin, or Hoglander.

Nic Petan and Zack MacEwen were put in some cushy spots, though they seem more like placeholders to begin with, so let’s not read into that.

Olli Juolevi got the nod to play with Tyler Myers, instead of Jack Rathbone, who played with Luke Schenn. That would seem to give Juolevi a slight advantage — though that’s probably overthinking things at this point. There is a battle on defence though, and there might not be room for both young blueliners on the opening night roster.

Podkolzin looked impressive in his first NHL training camp, showing off a heavy shot on a few occasions, lined up next to J.T. Miller and Garland. Miller began at centre, which is where the winger ended last season. That’s probably more to do with Elias Pettersson and Brandon Sutter being absent though, of course.

Travis Hamonic is dealing with a personal matter and will not participate in today’s training camp activities.

Also missing were Tyler Motte (injured), Justin Bailey (tested positive for COVID-19), and Quinn Hughes (unsigned). After missing yesterday as a precaution because he was feeling under the weather, Horvat was on the ice with his teammates.