Supporters of light rail transit (LRT) previously argued a cancellation of the Surrey Newton-Guildford (SNG) LRT would delay any rail rapid transit extension in the South of Fraser by decades, but that no longer seems to be the case.

A series of work plan recommendations in a new report to be considered by TransLink’s Mayors’ Council this week highlights that the public transit authority is aiming for a 2025 opening of the 16-km-long Fraser Highway extension of SkyTrain’s Expo Line from King George Station to Langley Centre.

This possible completion date — the same year the Broadway Extension is slated to open — is only one year later than the scheduled 2024 opening of the now-cancelled SNG LRT and about four years earlier than the previous completion timeline for rail rapid transit on the Fraser Highway.

TransLink anticipates it will be able to move fairly quickly on planning work for the project given its immense knowledge and expertise on building and operating SkyTrain. It will particularly leverage the region’s recent experience with the Evergreen Extension and the ongoing Broadway Extension.

The public transit authority has laid out a potential 15-month timeline to develop a preliminary plan and business case that will allow for a Request For Qualifications to be issued to private contractors by mid-2020. Afterwards, procurement will take another 15 months, and construction will take at least four years.

Throughout the first eight months of 2019, TransLink’s South of Fraser Transit Strategy will be concurrently ‘refreshed’ to reflect the cancellation of the SNG LRT and the acceleration of the Fraser Highway SkyTrain extension.

The report notes that TransLink has $30 million available in its 2019 budget to conduct preliminary planning for the new SkyTrain project. Staff also provided a revised figure on TransLink’s total spending on the cancelled SNG LRT: the public transit authority spent $57 million, not the previously stated $77 million, on LRT planning and pre-construction work.

There is no updated figure on the projected total project cost, however, a previous analysis pegged the SkyTrain extension at $2.9 billion, including a $730 million (25%) contingency. It is anticipated the project can be achieved within the existing funding envelope of $3.5 billion for all South of Fraser rail rapid transit projects.

This entails combining the second and third phases of funding together, but the third phase is currently unfunded. Moreover, the full extension and its stations could be constructed in phases.

A full 2025 completion depends on TransLink’s ability to secure the required funding beyond the scope of the second phase of the Mayors’ Council’s vision, without any delay. 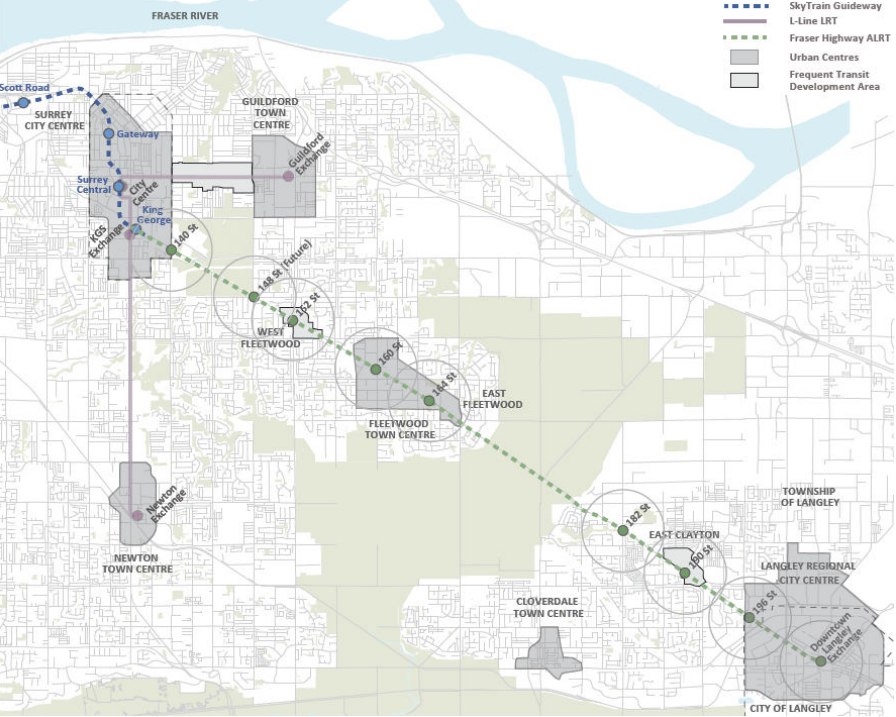 There will be eight new stations along the SkyTrain extension, plus a possible future ninth station at 148 Street. Other project components include the acquirement of 55 additional train cars, new bus exchanges, and the allowance for a new or expanded operations and maintenance facility.

Travel times on the extension are estimated to be about 22 minutes — up to 13 minutes faster than the LRT option with nine stations. 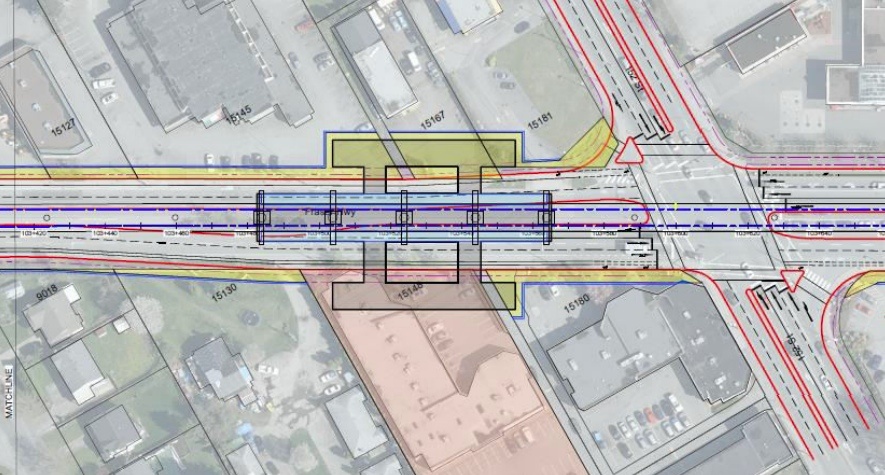 This new rapid bus route is one of four new regional B-Line bus routes that will be launched by the end of 2019.

However, TransLink no longer believes the B-Line investments planned for the Fraser Highway corridor will be cost-effective.

The enhanced bus infrastructure will be demolished within just a few years to allow for the construction of SkyTrain. These investments include new B-Line shelters, real-time next bus countdown signs, traffic signal priority, and bus-only lanes and queue jumpers.

Instead, the public transit authority wants to implement the interim measures of improving the No. 502 and No. 503 routes serving the Fraser Highway corridor. B-Line infrastructure funding for the Fraser Highway will be redirected to the Newton-Guildford corridor to upgrade the existing 96 B-Line to a level that is consistent with the new B-Line rapid bus program.

Up until this point, there were no plans to upgrade the 96 B-Line, as the SNG LRT was previously slated to replace the express bus service in 2024.