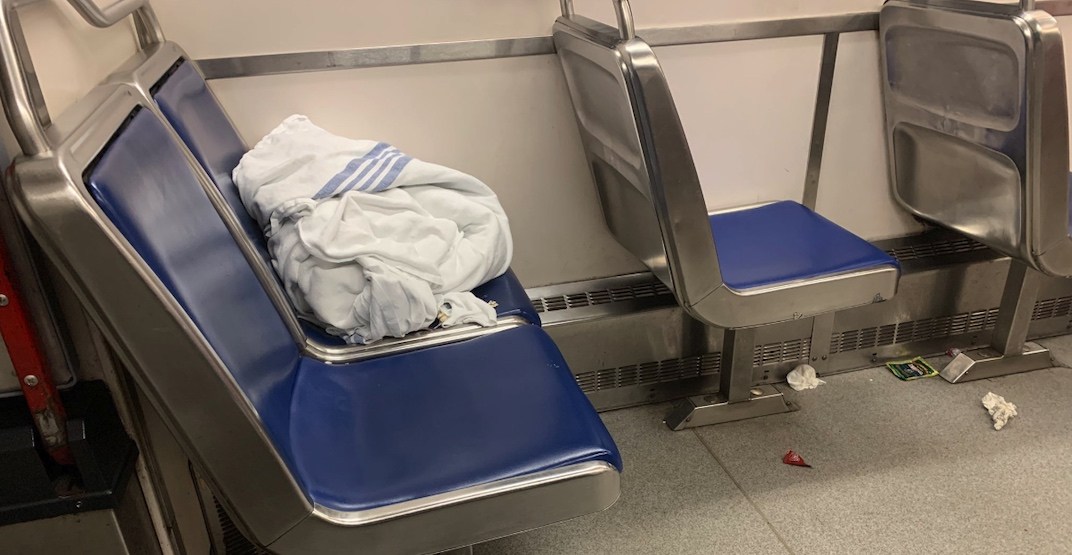 What do food and drink containers, stains, free daily newspapers, odd smells, and general dirt, dust, and grime have in common?

These are all frequently found onboard Metro Vancouver’s public transit system, on surfaces where they should not be.

However, TransLink is acknowledging this as an issue that needs to be finally remedied, and it is now working towards improving its cleaning and maintenance practices as a part of a new comprehensive strategy of improving customer service.

“Cleanliness on transit is hugely important to our customers, which is why improving cleanliness standards throughout the system is a key component of our Customer Experience Action Plan,” Ben Murphy, a spokesperson for TransLink, told Daily Hive.

Someone pooped on the bus this morning. There are LITERALLY pieces of caca in the front of the #4 Powell bus. Bus drivers DO NOT get paid enough to deal with this shit 💩

The public transit authority is currently in the process of evaluating private contractor bids to provide new cleaning services for BC Rapid Transit Company (BCRTC) — the TransLink subsidiary that operates and maintains the Expo Line, Millennium Line, and the West Coast Express.

The selected contractor will be responsible for cleaning stations, maintenance facilities, and trains, both in and out of service.

“There has been a strong response and we’ve been conducting our due diligence with respect to selecting the successful proponent,” he said.

Murphy also notes the public transit authority is exploring the possibility of creating a new cleanliness and maintenance “virtual hotline” that would allow passengers to inform transit operators about cleaning or maintenance issues online.

For the time being, passengers can continue to bring up any cleanliness issues by phoning the customer service hotline or tweet issues to TransLink’s Twitter account.

Thanks for letting us know. I have sent a request for cleanup.^RR

Thanks for the info. I can advise control. ^CK

There is also a new effort to improve the cleanliness of the buses; the public transit authority operated a mobile bus cleaning pilot project last year for several months, involving two vans with crews providing cleaning services to select buses during layover periods.

“TransLink is always considering ways to improve cleanliness around our bus network, with any further announcements made in due course,” added Murphy.

As for the Canada Line, it is privately operated and maintained separately by ProTrans BC, a subsidiary of SNC-Lavalin, which outsources the cleaning work for this SkyTrain line.

Up until last fall, GDI Integrated Facilities Services’ crews were responsible for the cleaning of Canada Line stations and train interiors — their task employed over 50 janitors. GDI, which was responsible for cleaning the Canada Line since the system’s opening in 2009, was replaced with the crews of Tricom Building Maintenance.

It is too early to compare Tricom’s work with GDI, but a non-scientific poll attached to a Daily Hive article in September 2018 — with nearly 1,700 total votes — found GDI’s cleaning work on the Canada Line to be far superior to BCRTC’s efforts on the Expo Line and Millennium.

Readers were asked “Which SkyTrain system is the cleanest?” and an overwhelming 88% voted for the Canada Line, while only 3% voted for the Expo Line and Millennium Line.

Thanks for letting us know. I’ll alert Control.^RR

Is this on a train currently? If so, do you have a car number that you’re on so I can inform SkyTrain? ^AR

@idance4joy This area has been cleaned up. ^rp

On the @TransLink file, look at how dirty the skytrain floors get! pic.twitter.com/bJqtpUvf

Please don’t do this on @TransLink #skytrain. No one wants to sit on dirt, or stand because a seat is dirty. pic.twitter.com/xKmihsaIm1

The floor on the skytrain is disgusting. Doesn’t anyone clean these?! How dirty are these trains?! #ew @TransLink pic.twitter.com/xYmoTov6ym

@TransLink Train 116 has a lot of garbage inside pic.twitter.com/aJh4iS3cfC

@duanebrown What bus stop is this? We’ll try to get someone out there to clean it up.^DA

skytrain is not a huge garbage container, dude. pic.twitter.com/PxLfxKiViL