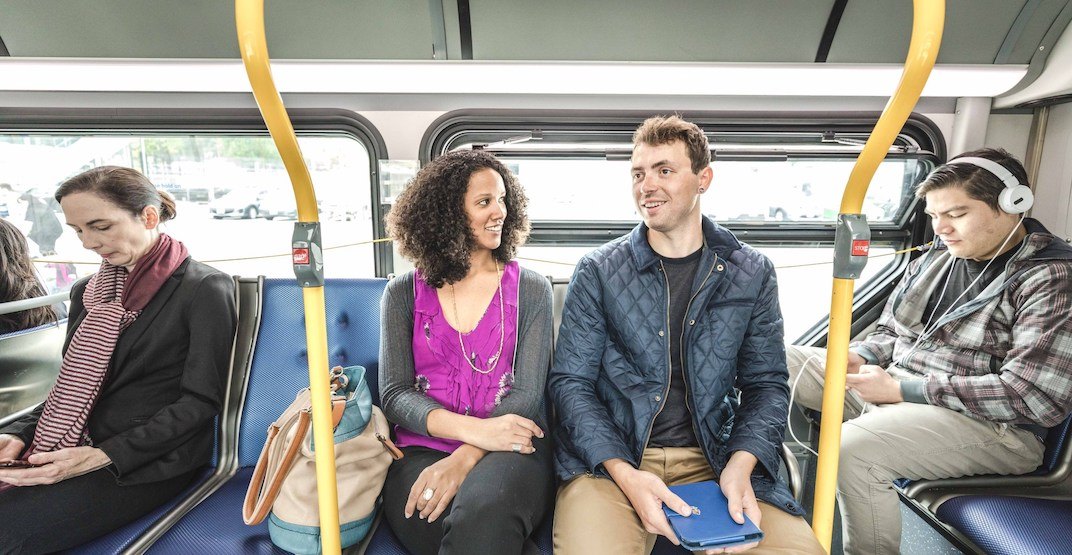 Interior of a new TransLink bus with air conditioning. (TransLink)

With summer now fast approaching, air conditioning units on many of TransLink’s buses and trains will be cranked up to full blast in tandem with the rising temperatures.

But not all of the buses and trains are outfitted with air conditioning, although it is certainly the new standard for all of the public transit authority’s new fleet orders.

You’ll be happy to know we do have more climate-controlled buses on the way! ^cm

The Mark II and new Mark III trains on the Expo Line and Millennium Line also have cooling and heating systems as well, with the Mark III systems being an improvement over the older cars.

However, the old Expo-era Mark I cars do not have air conditioning, which means overhead fans and the air flow from open windows are the only source of relief for passengers during the sweltering heat. Fortunately, all 150 Mark I cars will be gradually replaced with new cars throughout the 2020s.

Not all trains are equipped with AC, it is only the newer cars that have them. The original Mark 1 trains from when SkyTrain first open are not equipped ^LA

As for the Canada Line, while its trains technically have air conditioning capabilities, they are known to be particularly insufficient for their task of cooling the large packed trains, which quickly become humid and stuffy.

TransLink is addressing this issue on the new additional fleet of 24 cars on the Canada Line set to arrive this year, as these new cars will come with a more powerful air conditioning system.

Oh wait, it’s a bit better towards the end of the car, but not great either.

Sorry for the uncomfortable temperatures. It is sometimes difficult to maintain cooler temperatures with the doors opening so often, especially when they are crowded ^LA

In some situations, however, being comfortable on a climate-controlled transit vehicle is all about keeping those windows closed.

When it comes to the Expo Line and Millennium Line cars with climate control systems, “each car has a heating, ventilation and air conditioning (HVAC) unit on its roof. It uses sensors that determine the outside air temperature versus the air inside the car, then that will follow an algorithm that helps maintain an optimal temperature for passengers.”

So, once again, keep those windows closed.

until a bunch of bozos OPEN THE WINDOWS

sirs! this is not an emergency! WHERE IS SETH ROGAN

@Sethrogen @TransLink can you please add a “Hey sweatballs, if you close the windows the air conditioning will work!” announcement? #sosticky

But there are also those times when the climate control systems seem to have a mind of their own.

“As well, climate control means there are times when it seems that both the heating and cooling is on simultaneously. This is so the system can ‘dry’ or dehumidify the air on a cold or humid day,” continues the PSA.

In all other scenarios, you certainly have the permission to [politely] holler at your driver if you’re on a bus… or at TransLink’s Twitter account, if you’re on the driverless trains.

Sincere apologies for the inconvenience. If you ever feel the bus is getting too warm, you are allowed to ask the driver to turn it down as most buses have the ability to alter the setting. Hope this helps. ^pj

What is the 3 digit number of the train you are on?^jd

Most of our older buses in our fleet aren’t AC equipped unfortunately. Drivers may not be get an accurate feel for the temperature at the back since they’re open with the door openining and closing regularly. Try mentioning it to the driver and see if they can help. ^cm

Sorry if you are uncomfortable. Trains have now been switched to summer mode. It may seem cool now but will be welcomed when trains get full and it warms up later.^RR

It was most likely set earlier in the day, or needs readjustment, what is your train #? Thank you. ^jkd

Issue was resolved by opening windows on train and bus. I understand what constitutes air conditioning for some is warm for others. The key is wearing layers and having access to windows that can be opened. Most days King George to Waterfront is half hot and half cold.

I’ll let control know about this! Thanks for letting us know, and sorry for the heat. Do you happen to know if any windows are open? At times the cold breeze sets off the thermostat into heat mode ^LA

@TransLink Please tell drivers to turn on the air conditioning. if available, on newer buses. We are dying in this vehicle.