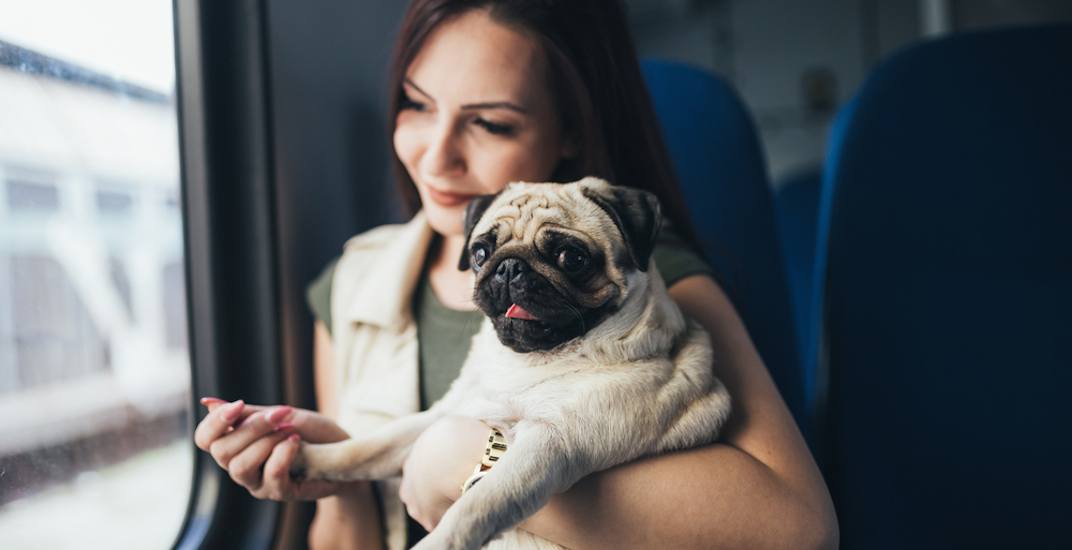 Dog onboard a train. (Shutterstock)

There will not be any change in policy when it comes to pets travelling on Metro Vancouver’s public transit system.

TransLink’s Board of Directors approved a staff recommendation to retain the existing pet policy after conducting a thorough review on the risks and costs of reducing the restrictions on passengers with uncaged pets.

Currently, TransLink allows provincially-certified service animals or small pets if they are in a fully-enclosed handheld cage.

“Our existing policy is in place to strike a balance and ensure the comfort and safety of our general traveling public,” said Andrew McCurran, the Director of Strategic Planning and Policy for TransLink, adding that the fully-automated nature of SkyTrain adds a unique layer of risk that most of the other public transit systems do not have.

Based on a survey conducted by TransLink earlier this year with nearly 1,700 respondents, with 30% indicating they are the primary caretaker of a dog, 41% said an expansion of access for dogs with restrictions would negatively impact their transit experience and 19% even stated they would use transit less often.

Only 22% said it would positively impact their ride on the transit system, and just 10% said they would take transit more often as a result of a policy change.

A total of 32% of respondents said less restrictions would make no difference to their transit experience.

“A passenger who might not want to board that vehicle [with an uncaged pet] might have to wait for another one,” added McCurran.

A report by staff also states that less restrictions for pets creates a potential risk of decreased fare revenue, based on the opinions expressed in the survey.

As well, there could be a potential increase in claims and liability, given that pet attacks do occur from time to time on the systems of peer agencies with less restrictions.

To implement the policy changes, there would be a one-time cost of between $125,000 and $975,000, depending on the complexity of the policy, the requirements on staff, and the degree of customer outreach required. This cost includes developing proper protocols, training front-line staff, consulting labour representatives, developing a customer information campaign, and establishing monitoring and reporting processes.

An increase in annual operational costs would also result from the additional cleaning and maintenance required.

When asked whether the feasibility of a pilot project was examined, such as the current pilot project on Toronto’s GO Transit system during off-peak times, staff said this was not possible.

Geoff Cross, Vice President of Transportation Planning and Policy for TransLink, said the region’s public transit is “quite busy” and it is difficult to determine where and when there is physical capacity on the system, even during weekends.

“Regional systems that have added that are running a different type of system like GO Transit, which are large commuter trains and there is a lot of room on those,” said Cross.

“It really gets challenging to enforce it and to figure out where people are… [and] once you put in a pilot in, there are a lot of operational expenses to get a pilot going and it is difficult to pull something like that back.”

A table comparing the pets on transit policies of major public transit systems in North America: 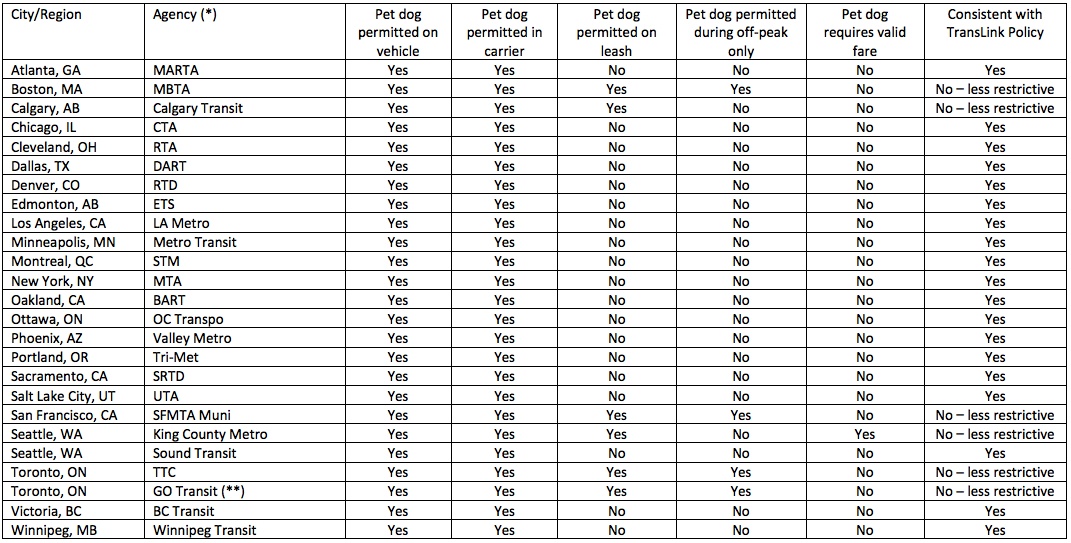 A table comparing the pets on transit policies of various public transit systems in North America. Click on the image for an enlarged version. (TransLink)