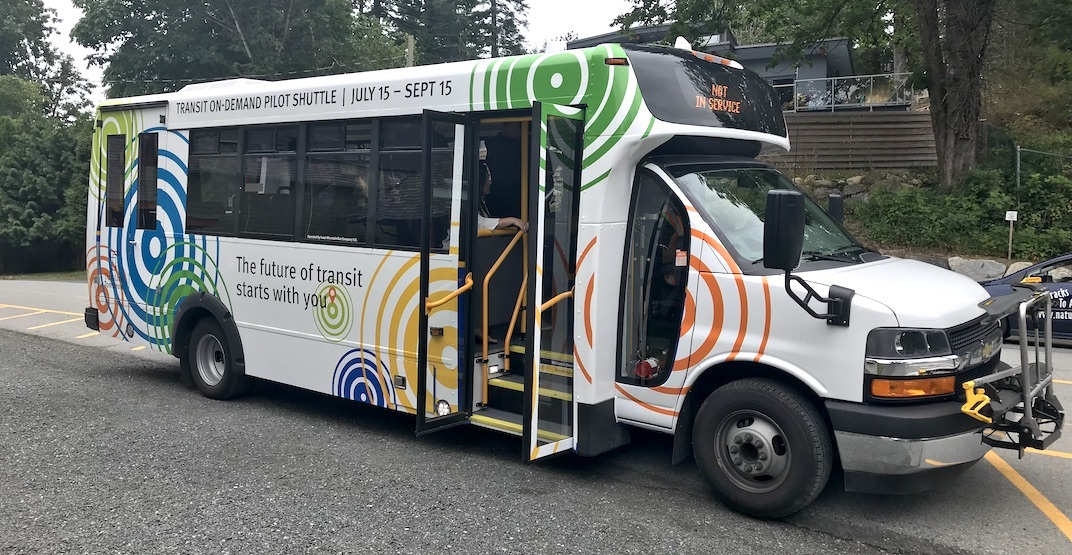 One lesser-known fact about TransLink is that its jurisdiction over Metro Vancouver’s public transit system includes Bowen Island, where several routes use community shuttle mini-buses.

But providing reliable transit service for the 3,700 residents scattered across the 50-sq-km island, located just west of Horseshoe Bay, has not been easy, efficient, or cheap to operate.

That is why TransLink announced its expanded prototype project today of an online, app-based booking tool that provides customized and flexible on-demand transit services, which carries some similarities to rideshare.

Starting next week, transit riders on Bowen Island can book their trips with TransLink’s new TapRide smartphone app, online, or by calling a dedicated phone number. Payment is through the Compass Card or cash when they board the bus; no payment option is available through the app.

Two additional mini-bus vehicles have been deployed to the island for peak season on-demand operations between July and September, when the island’s population can grow by a few thousand people.

This on-demand service allows TransLink to provide more convenient service in low-density, lower-demand service areas, and the model could be replicated on other community shuttle services in the region.

During a press conference, TransLink CEO Kevin Desmond said this is “a new technology that could change how we could move around the region.”

“This emerging transit model offers significant future potential in certain parts of our region. Existing routes could benefit from a mixture of fixed stops with on-demand transit zones, and dedicated on-demand buses can be used to transport workers to large outer-city corporate campuses,” he added.

For Bowen Island’s weekday on-demand evening service from 4:30 pm to 9:30 pm, riders will be picked up from the stop at BC Ferries’ Snug Cove terminal and dropped off at their stop of their choice, which means riders may need to walk to their final destination once they are dropped off.

However, it should be noted that the on-demand service does not replace any of the existing fixed-route services running on Bowen Island — these routes continue to operate in parallel, with all routes ending at Snug Cove.

These Bowen Island routes see some of the lowest ridership and highest operating subsidies on Metro Vancouver’s bus network:

TransLink will be rolling out an extensive educational campaign over the coming weeks to inform island residents and tourists of the new on-demand bus service, including signage on BC Ferries vessels that operate on the Horseshoe Bay-Snug Cove route.