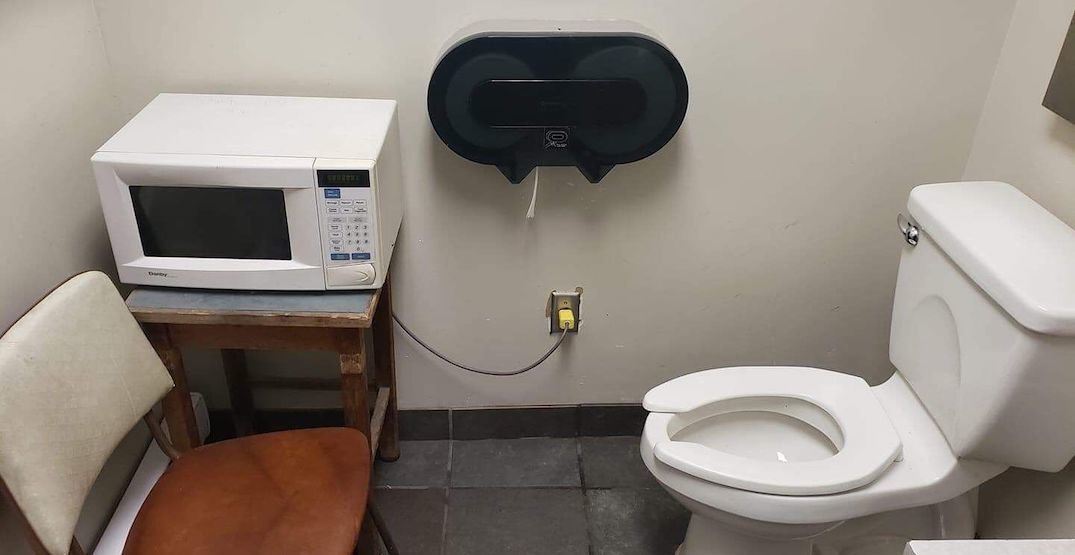 A microwave next to a toilet inside a washroom for bus drivers in North Vancouver. (submitted)

A photo making its rounds on social media over the weekend shows a microwave plugged in just two feet away from a toilet in a washroom dedicated to bus drivers in North Vancouver.

TranLink confirmed to Daily Hive this photo was taken in a facility owned by Coast Mountain Bus Company (CMBC) in North Vancouver, but asserts the microwave’s placement is not sanctioned by the employer.

“Supervisors have repeatedly removed the microwave, but staff keep putting it back. To be clear, CMBC has not set up this washroom with a microwave, nor does CMBC intend for operators to cook food in washrooms,” said TransLink spokesperson Ben Murphy.

This of course comes as Metro Vancouver’s bus and SeaBus services face growing disruptions from labour action, with both sides unable to break the impasse over wages, benefits, and working conditions.

When it comes to working conditions, Unifor, the union representing the workers, says drivers need adequate recovery times — allowing for washroom and eating breaks — that properly account for bus delays due to rising traffic congestion.

The lounge inside the new facility for bus drivers at UBC bus exchange. (TransLink)

Murphy said CMBC currently provides a total of 53 facilities for bus drivers to use the washroom or spend rest time along the system. Most of these facilities are located at the end of the routes, with the majority providing lounge space and some only washrooms.

The newest facility is located at the recently completed UBC bus exchange, one of the region’s busiest bus loops, where a glass-enclosed, pavilion-like building for bus drivers includes a relatively large crew lounge room and a dedicated washroom.

Washrooms inside the new facility for bus drivers at UBC bus exchange. (TransLink)

There are plans to provide similar facilities for operators elsewhere on the bus network. For example, TransLink is planning to construct a new bus exchange in Steveston that could potentially include dedicated lounge and washroom facilities for bus drivers. But this new bus exchange faces delays, after Richmond city council’s decision this past summer of rejecting TransLink’s proposal of using city-owned land for the project.

TransLink is currently leasing property in Steveston to provide bus drivers with a washroom facility in the area.

“CMBC is constantly looking for new places to either put facilities or rent access to them for operators, especially now the system is expanding,” said Murphy.

The new glass-enclosed pavilion at the recently-built UBC bus exchange is a lounge and washroom for bus drivers. (Kenneth Chan / Daily Hive)